Comments (0)
Add to wishlistDelete from wishlist
Cite this document
Summary
Jean Paul Sartre - a twentieth century philosopher who believes in atheistic existentialism, suggests that man is human in nature and from birth to the end of his life, he is limited to choose certain actions. These actions depict that he is free to choose from among alternatives and cannot escape choosing…
Download full paperFile format: .doc, available for editing
HIDE THIS PAPERGRAB THE BEST PAPER93.3% of users find it useful 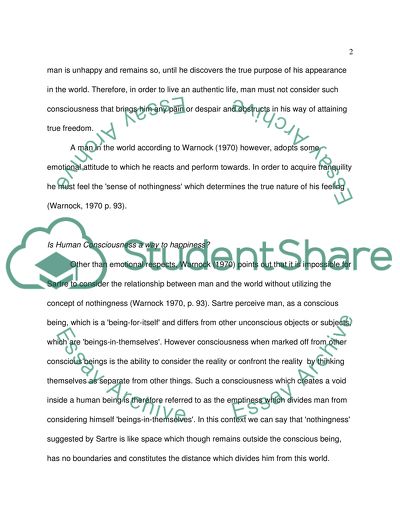 Download file to see previous pages 346). Though Sartre does not believe in true contention, this paper analyzes the extent to which Sartre's philosophy connote a happy and prosperous life.
Existentialism is a doctrine that to some extent supports and enhances human subjectivity to lead an authentic life, but at the same time it overrides the evil nature hidden behind human consciousness, and appears in a 'naturalistic' way of perceiving life. Sartre points out that man is emotional in nature and feel the way things physically appear to him. He, therefore, is free and well aware of the fact that this consciousness can bring him pain and anguish in many ways. According to Sartre it is better to say that man is unhappy and remains so, until he discovers the true purpose of his appearance in the world. Therefore, in order to live an authentic life, man must not consider such consciousness that brings him any pain or despair and obstructs in his way of attaining true freedom.
A man in the world according to Warnock (1970) however, adopts some emotional attitude to which he reacts and perform towards. In order to acquire tranquility he must feel the 'sense of nothingness' which determines the true nature of his feeling (Warnock, 1970 p. 93).
Other than emo

Is Human Consciousness a way to happiness
Other than emotional respects, Warnock (1970) points out that it is impossible for Sartre to consider the relationship between man and the world without utilizing the concept of nothingness (Warnock 1970, p. 93). Sartre perceive man, as a conscious being, which is a 'being-for-itself' and differs from other unconscious objects or subjects, which are 'beings-in-themselves'. However consciousness when marked off from other conscious beings is the ability to consider the reality or confront the reality by thinking themselves as separate from other things. Such a consciousness which creates a void inside a human being is therefore referred to as the emptiness which divides man from considering himself 'beings-in-themselves'. In this context we can say that 'nothingness' suggested by Sartre is like space which though remains outside the conscious being, has no boundaries and constitutes the distance which divides him from this world.
In case we perceive 'nothingness' as internal to the 'being-for-itself', it refers to the emptiness within, which aims to fill by man's own actions, his personal thoughts and his own created beliefs. It is this possession of 'emptiness' that despairs man when he finds himself in situations making it possible for a 'being-for-itself' to perceive the world and also to act in it, by determining his own course of action by reference to an imagined future. Such imagination escorts the man to what Sartre has referred to 'bad faith' and due to this, his freedom is subjected to an unrealized potential which is the main cause of despair for the man, because while hiding behind such bad faith, no man is able to escape from taking actions or making choices. Therefore he suffers when his expectation of 'bad faith' remains unfulfilled and there he feels emotionally downtrodden and forlorn.
On the other hand if man considers 'being-in-itself' and never subjects to any bad faith, he feels himself emotionally free because ...Download file to see next pagesRead More
Share:
Tags
Cite this document
(“Sartre's Philosophy of Life Essay Example | Topics and Well Written Essays - 2250 words”, n.d.)
Sartre's Philosophy of Life Essay Example | Topics and Well Written Essays - 2250 words. Retrieved from https://studentshare.org/miscellaneous/1500092-sartres-philosophy-of-life

CHECK THESE SAMPLES OF Sartre's Philosophy of Life

Community life has its advantages but also has its limitations to the members and the outsiders.
“The good things we secure for ourselves are uncertain and precious until it is secured for everyone and incorporated into our common life.”-Jane Addams. With society moving faster and more detached to technology, busy schedules, and job changes, it becomes harder and harder to feel a sense of community. This can result in a life of solitude and a lose a sense of belonging. Community life helps extract people out of this solitude life and introduce better, challenging and fun tasks such as participation in acts of kindness. It also provides room for volunteering, meeting neighbors, discussing important issues with othe...
7 Pages(1750 words)Case Study
sponsored ads
Save Your Time for More Important Things
Let us write or edit the essay on your topic "Sartre's Philosophy of Life" with a personal 20% discount.
GRAB THE BEST PAPER

Let us find you another Essay on topic Sartre's Philosophy of Life for FREE!