Comments (0)
Add to wishlistDelete from wishlist
Cite this document
Summary
Consumer dependence on credit, where on the one hand is responsible for providing with unlimited necessities of life. Consumer credit privileges awarded to a student or a working professional is an indication of credentialed status. A person is almost a nonentity until he or she establishes an ongoing credit history…
Download full paperFile format: .doc, available for editing
HIDE THIS PAPERGRAB THE BEST PAPER91.3% of users find it useful 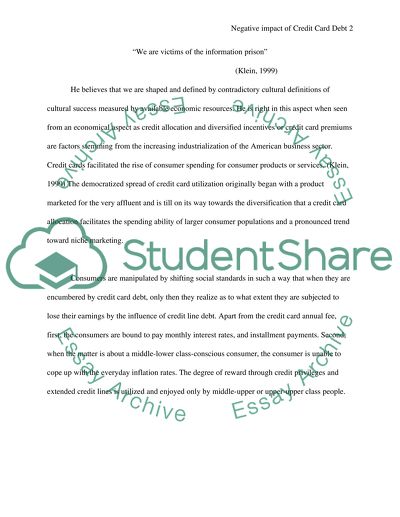 Download file to see previous pages Consumers are implicitly told that credit privileges facilitate the increasingly complex choices within their lives. A myriad combination of complex choices arises when individuals seek out distinctive status in a society offering various recreational and professional lifestyles. No doubt credit cards, and the privileges attributed to possessing spending power, are vital social elements defining our position in society. Consumer has not only accepted the unlimited spending freedom of credit extension but has also welcomed the social desirability of consumer debt. According to Foucault (1977) claim,
He believes that we are shaped and defined by contradictory cultural definitions of cultural success measured by available economic resources. He is right in this aspect when seen from an economical aspect as credit allocation and diversified incentives or credit card premiums are factors stemming from the increasing industrialization of the American business sector. Credit cards facilitated the rise of consumer spending for consumer products or services. (Klein, 1999) The democratized spread of credit card utilization originally began with a product marketed for the very affluent and is till on its way towards the diversification that a credit card allocation facilitates the spending ability of larger consumer populations and a pronounced trend toward niche marketing.
Consumers are manipulated...
Apart from the credit card annual fee, first, the consumers are bound to pay monthly interest rates, and installment payments. Second, when the matter is about a middle-lower class-conscious consumer, the consumer is unable to cope up with the everyday inflation rates. The degree of reward through credit privileges and extended credit lines is utilized and enjoyed only by middle-upper or upper-upper class people.
The ideal class-conscious customer is the one who actively engages in consumer credit activity and makes regular payments. This economic pattern is one end of the process. The other end refers to those painful circumstances, which the consumer experiences during the process.
No doubt one's credit card or line of credit provides an access for products marketed through advertising and offered as cultural alternatives, but one cannot ignore the drawbacks of keeping credit card in today's era when consumers are continuously getting burdened up with the high energy prices and continuous rising rates.

According to U.S analysts,
"Interest rates are still historically low, the jobs market is healthy, and wages are
increasing, albeit at a restrained pace. So, the deterioration of consumer financial health is expected to be gradual at worst, and unlikely to create a collapse either in any particular capital market or in the economy overall"
(Jones, 2005)
According to a study, in "The plastic Safety Net: The Reality Behind Credit Card Debt in America" published by the Center and Washington D.C.-based think tank, Demos
"The average low- and middle-income household with debt owes about $8,650.00 in
credit card debt out of ...Download file to see next pagesRead More
Share:
Tags
Cite this document
(“Credit Card Debt: Negative effects among society Essay”, n.d.)
Retrieved from https://studentshare.org/miscellaneous/1499980-credit-card-debt-negative-effects-among-society

... among individuals. The researchers have focused their study on the students and young people and have proved the very fact that use of illegal drugs is the outcome of biological and environmental factors too, and only domestic turbulences do not drag the young generation towards drug consumption. On the contrary, Mubeen & Sharif declare decline in family bondage and giving up of observing ethical values and moral obligations result in the deterioration of the youth of society and subsequent chemical dependency. “The effects of drug use not only on drug users themselves”, observes Marina Barnard, “but also the feelings of anger, sadness, anxiety, shame and loss that are commonly experienced by their extended family.” (2006: p 31) Cirakoglu...
7 Pages(1750 words)Coursework

In the process of effective communication, the effects that can be incurred to the audience can be explained on the basis of different views and aspects. Included in the said issues is the capability of the audience to intercept and understand the stimuli and signals that are...

... interests in life. These interests are wide-ranging, including economic interests, family life and political interests among others. Although the opportunities for personal development are few, Patrick and Nick (2001 p 66) observe that there is a tendency of the post-modern society to be committed to various aspects of their day to day activities. This may be attributed to the disillusionment arising from the diminishing expectations in life. The society views commitment to the modern belief of progression as a continuation of the negative impact that science has had on the world. There is little communal work as people pursue different interests in life, which has lowered solidarity in communities. The post-modern society is also...
7 Pages(1750 words)Essay

...Running Head: Business Sustainability & Society Business Sustainability & Society [Institute’s Business Sustainability & Society Introduction Since centuries, ethics has been a crucial and significant component of the human societies that contributed enormously in the creation of norms and values through religious influences, as well as through contribution of intellectuals and philosophers in the society. Unfortunately, nowadays, it is an observation that individuals, organizations, and even nations have commenced to overlook the phenomenon of ethics in their practices, specifically in the business sector that has become the major stakeholder confronting criticisms related to ethical practices. Critics (Crane, pp. 23-29, 2007) argue...
10 Pages(2500 words)Case Study
sponsored ads
Save Your Time for More Important Things
Let us write or edit the essay on your topic "Credit Card Debt: Negative effects among society" with a personal 20% discount.
GRAB THE BEST PAPER

Let us find you another Essay on topic Credit Card Debt: Negative effects among society for FREE!