Comments (0)
Add to wishlistDelete from wishlist
Cite this document
Summary
Germany has fashioned a single-tiered health care system where benefits are standard, coverage is universal, employer-based health insurance is predominant, financing is equitable, there is freedom of patient choice, system micromanagement is non-existent, and costs are relatively low (Haupt, 2009)." "The efficacy of this system relies upon macro regulation by the Concerted Action in Health Care, a private consortium of insurers ("sickness funds") that operates in coordination with the government." "The government regulation proscribes compulsory health insurance, requires crossubsidization, and requires everyone to pay (Haupt, 2009)." This is the perspective that will be assessed throughout…
Download full paperFile format: .doc, available for editing
HIDE THIS PAPERGRAB THE BEST PAPER98.1% of users find it useful 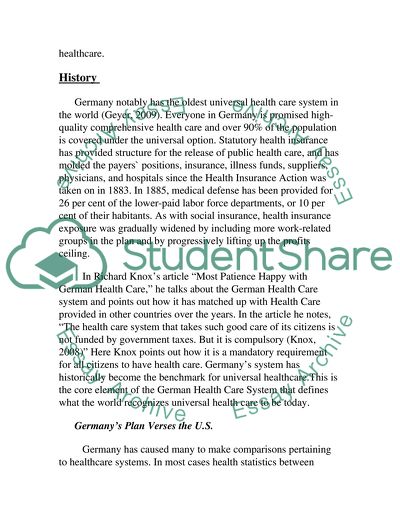 Download file to see previous pages While it is a system not without faults, numbers do reveal it succeeds in enhancing overall quality of life where other systems fail. Some noted factors of why this system has worked so well can be seen in the fact the system is not a government run plan but a mandatory system carried by extracting funds directly from the workers. Regulations put forth by the government to maintain quality of care and services, but in some cases these regulations fail to serve their purpose. In all when the system is assessed alongside many countries who have similar plans and those who currently avoid a public option Germany proves to be a benchmark when it comes to healthcare.
Germany notably has the oldest universal health care system in the world (Geyer, 2009). Everyone in Germany is promised high-quality comprehensive health care and over 90% of the population is covered under the universal option. Statutory health insurance has provided structure for the release of public health care, and has molded the payers positions, insurance, illness funds, suppliers, physicians, and hospitals since the Health Insurance Action was taken on in 1883. In 1885, medical defense has been provided for 26 per cent of the lower-paid labor force departments, or 10 per cent of their habitants. As with social insurance, health insurance exposure was gradually widened by including more work-related groups in the plan and by progressively lifting up the profits ceiling.
In Richard Knox's article "Most Patience Happy with German Health Care," he talks about the German Health Care system and points out how it has matched up with Health Care provided in other countries over the years. In the article he notes, "The health care system that takes such good care of its citizens is not funded by government taxes. But it is compulsory (Knox, 2008)" Here Knox points out how it is a mandatory requirement for all citizens to have health care. Germany's system has historically become the benchmark for universal healthcare.This is the core element of the German Health Care System that defines what the world recognizes universal health care to be today.
Germany's Plan Verses the U.S.
Germany has caused many to make comparisons pertaining to healthcare systems. In most cases health statistics between Germany and the US don't match up and Germany wins out. When looking at the World Health Organization's Core Health Indicators, Germany has an 80year life expectancy to the United States' 78year life expectancy. Hospital beds available per 10000 people is 83 in Germany while it's 32 in the US, and there are 34 physicians per 10000 people in Germany verses the United States' 26.What are the socioeconomics of the population Are there population problems Germany has over 81 million inhabitants, with over 230 inhabitants per square kilometer. Urbanization is a major part of the population resting at a high ...Download file to see next pagesRead More
Share:
Tags
Cite this document
(“Germanys Healthcare System Research Paper Example | Topics and Well Written Essays - 3750 words”, n.d.)
Germanys Healthcare System Research Paper Example | Topics and Well Written Essays - 3750 words. Retrieved from https://studentshare.org/miscellaneous/1499933-germanys-healthcare-system

In order to compare the welfare system of the three proposed countries, it is important to first develop a comparative method that would guide in comparing the three states. For the purpose of this paper, a binary comparison would be conducted. The implicit comparison would deal with Britain while the explicit comparison would explore the USA and Canada. Thereby a small N’ study would be used, that is, of three countries.
The three countries selected to share a similarity in the form that these countries are a welfare state. This is when welfare is mainly funded by the state. While the USA and Canada focus on the liberal welfare state, the welfare state of the UK is not quite defined.
The comparison of the welfare...
8 Pages(2000 words)Term Paper
sponsored ads
Save Your Time for More Important Things
Let us write or edit the research paper on your topic "Germanys Healthcare System" with a personal 20% discount.
GRAB THE BEST PAPER

Let us find you another Research Paper on topic Germanys Healthcare System for FREE!