Comments (0)
Add to wishlistDelete from wishlist
Cite this document
Summary
This report is going to provide a case study of Marketing strategies of Sky Plc. which had successfully re-import the formula of healthy competition in the media industry that had provided the inspiration for its own beginnings more than 50 years before. This assignment draws all the marketing mix that provides Sky broadcasting to organize wide range of subsidiaries and to develop its brands of product…
Download full paperFile format: .doc, available for editing
HIDE THIS PAPERGRAB THE BEST PAPER98.4% of users find it useful 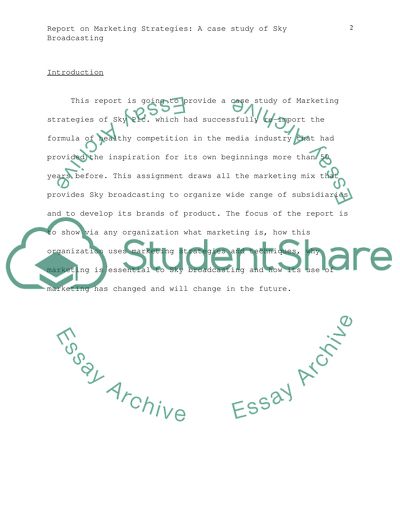 Download file to see previous pages Rupert Murdoch was the founder of Sky Television plc. In the beginning the company was four-channel satellite television service. Sky Television merged with collapsed rival British Satellite Broadcasting in 1990 to form British Sky Broadcasting (BSkyB) (Wikipedia, 2008)
British Sky Broadcasting "Sky" has a customer base of approximately 21 million viewers in 8.1 million households. The company is one of the leading multi-channel television platforms in the UK and Ireland. The broadcasting service provide its subscribers with an array of movies, news, entertainment and sports channels and interactive services on Sky Digital, the UK and Ireland's first and most popular digital television platform.
Being a volatile organization, the sky broadcasting earns its 80% income from its digital TV subscribers. Although the organization is the major player of UK media industry but the company strongly adheres with the policy of customer retention which most of organizations don't follow. In order to keep its customer constantly satisfied the organization has a large scale customer call center which not only undertake the marketing activities for the company but also increase the satisfaction level of the old customers by providing them instant information regarding their queries. The company employs approximately 6,000 people in various internal and outsourced customer contact centers, which play a major role in Sky's operations, because the contact center staff has front-line responsibility for maintaining the vital relationship between Sky and its digital TV customer base.
Nowadays, marketing communication and advertising is becoming exceedingly important in everyday life. The use of the Internet has augmented the importance of advertising as advertisements about a specific brand or product reach people easier. Moreover, Jones (1995) states that "advertising is capable of a sharp immediate effect on sales" which plays a main role in enhancing the brand name.
Furthermore many advertisements have deeper meanings than when seen at first sight especially in magazines where the main goal of the advertisement is to convey a message to the readers through the use of text or symbols. Central to much of modern day advertising in glossy magazines is the use of the metaphor (Proctor et. al, 2005). Metaphors are often used to broaden the way of understanding things. They also lead to a high level of ambiguity in the metaphoric form.
Advertisers are finding it more and more difficult to persuade consumers about a specific product. But the Sky broadcasting is dealing with the challenges by undertaking following creative opportunities:
1. With the involvement of superior level of animation, 3D and visual effects the company caters the needs of customers in the field of Branding, Sponsorship, Promotions & Script writing, Directing and Program packaging.
2. On-line: Sky broadcasting deals with all aspects of Interactive & new media advertising & design including web, EPG, interactive ...Download file to see next pagesRead More
Share:
Tags
Cite this document
(“Marketing Strategies of Sky Broadcasting PLC Case Study”, n.d.)
Retrieved from https://studentshare.org/miscellaneous/1499877-marketing-strategies-of-sky-broadcasting-plc

CHECK THESE SAMPLES OF Marketing Strategies of Sky Broadcasting PLC

Maslow has argued that security and safety are required by all human beings (Boeree 2006). According to the Federation Internationale de Football Association (2009), Uruguay was the first nation to host the Fifa World Cup. In 2010, South Africa would be the first African nation to host the next World Cup. But Euromonitor (2009) considers that South Africa is a country with a significant rate of insecurity that would influence the trip to South Africa. Various security strategies will have to be reviewed by the South African Government in order to implement security and safety during this big event (Republic of South Africa, 2008). To accomplish the safety of the tourists during the World Cup 2010, many South African cities have in...
17 Pages(4250 words)Research Proposal
sponsored ads
Save Your Time for More Important Things
Let us write or edit the case study on your topic "Marketing Strategies of Sky Broadcasting PLC" with a personal 20% discount.
GRAB THE BEST PAPER

Let us find you another Case Study on topic Marketing Strategies of Sky Broadcasting PLC for FREE!