Comments (0)
Add to wishlistDelete from wishlist
Cite this document
Summary
This paper will critically examine the Frege's puzzle of identity statements and provide a solution based on the works of G. Frege. The emphasis will be on resolution of the cognitive significance of difference between the identity statements based on the famous work of philosophy - "On sense and reference" by G…
Download full paperFile format: .doc, available for editing
HIDE THIS PAPERGRAB THE BEST PAPER95.6% of users find it useful 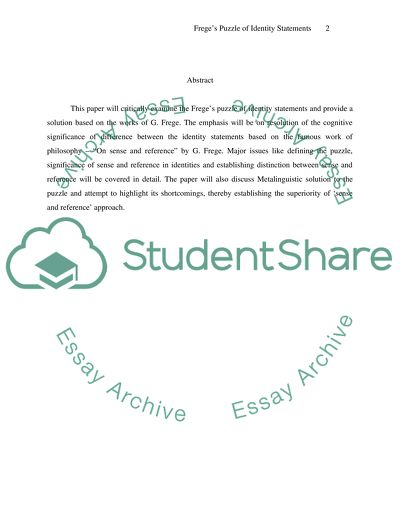 Download file to see previous pages Friedrich Ludwig Gottlob Frege, a German philosopher, was one of the founder fathers of establishing a systematic and analytical approach to the philosophy of language. He instituted the idea of logically proving the quantified statements. In Frege's philosophy of language he found two puzzles, of which one related to the identity of statements. Frege says
Now if we were to regard equality as a relation between that which the names 'a' and 'b' designate, it would seem that a = b could not differ from a = a (i.e. provided a = b is true). A relation would thereby be expressed of a thing to itself, and indeed one in which each thing stands to itself but to no other thing (Bencivenga E, 1993).
Here, he observed that mere representation of names and descriptions does not convey the information content of a statement or a sentence in terms of logic and meaning. He further probed and found that a minimum of two relations are required for significant understanding of the language. In the subsequent paragraphs we will discuss the Frege's Puzzle of identity statements in detail and reasonably justify the solution of the puzzle as suggested by Frege himself.
Identity statements are the expressions that equate the objects on both sides of the identity sign (Geach, O. and Black, Max, 1960). For example, "(2+3) = 5", "Clint is Eastwood" and "John is Peter's father". All these statements essentially belong to the same clan of kind " a= b". The statement "a = b" can only hold true when "a" and "b" both represent the same object or an individual. Now, consider a statement of kind "a = a". This statement also requires the same truth condition as required for the statement of kind "a = b". For both the cases, object or the individual is same and also, the denotations represent the same individual or the object. However, the meaning conveyed in the two cases is different. This appears to be a paradoxical situation as the representations of a unique object or an individual have a difference while being true at the same time. The Frege's puzzle states that when the difference in the representations, that is, "a" or "b" is not established by the two cases under consideration, then how we can find the difference in meaning or cognitive significance between the two true identity statements (Fiengo, Robert and May, Robert, 2006).
Cognitive Significance of the Difference of Identity Statements
To resolve the issue of difference, we first understand cognitive significance of a name or a statement. Cognitive significance of a statement, as brought out by Frege, can only be described by two important aspects of the statement, namely, 'sense' and 'reference' (Zalta, Edward N, 2005). Here, the 'sense' of the statement conveys more information then its interpretation by mere visual inspection (Schirn, M, 1976). Moreover, 'sense' is the integral part of the name and different names are associated with different 'sense' (Zalta, Edward N, 2005). A group of two or more statements may indicate or refer to a singular object but each statement has a unique sense of its own.
Next, we obtain the distinction between the ...Download file to see next pagesRead More
Share:
Tags
Cite this document
(“Freges Puzzle of Identity Statements Essay Example | Topics and Well Written Essays - 1500 words”, n.d.)
Retrieved from https://studentshare.org/miscellaneous/1499806-freges-puzzle-of-identity-statements

CHECK THESE SAMPLES OF Freges Puzzle of Identity Statements

Protecting Yourself from Identity Theft

...Identity Perception in the Virtual World Rough Draft This essay deals with defining the nuances of identity perception in the virtual world. To beginwith, this essay will describe what identity is. Further, it will develop the human relation setting within which the analysis will be conducted and descriptions put forth. This human relation setting is important from the point of view of the individual who looks at cyber space with a certain level of optimism. This model of optimism will be used within the framework of thinking aloud and evaluation methods that dictate the decision aids that a person makes use of when creating an identity through various choices and means. These choices can include the various activities that one indulges...
7 Pages(1750 words)Essay

Bullying is defined as to “act the bully (towards); persecute, intimidate, oppress (physically or morally) by threats or superior force” (Shorter Oxford English Dictionary, 2003).  However, this dictionary does not contain a definition of cyber-bullying, implying that the word was not in common usage at the time and the issue has evolved as a phenomenon since 2003. This would tie in with increased usage of the internet for such things as socializing using Twitter and Facebook, as well as more educational establishments using e-resources and virtual learning environments as part of their teaching.

Recently, attention has focussed on the phenomenon of cyber-bullying following the deaths of two students wh...
7 Pages(1750 words)Term Paper

The Ugly American: Duality and Identity

Because of the aftermath of World War II and the development of a xenophobic nature to the American identity, the ability for Americans to relate to foreign cultures is often stunted and without the flexibility required to successfully engage foreign states. William Lederer and Eugene Burdick wrote a book titled The Ugly American in which real events were related through disguised identities in relationship with the real histories of the American presence in Asia. The novel creates a duality between what exists and what it represents within many of the characters within the book.

The 1950s created strange beasts out of the American public. On the one hand, great strides in both social order and in technology had create...
8 Pages(2000 words)Book Report/Review

However, whether to fulfill basic needs or for prestige, what people buy usually make a statement about them and the sense of identity they have found themselves in. A consumer’s sense of identity will place them in a certain class based on their social power. Their possessions relate to the way they define themselves and how they are perceived by society and this paper will argue that people buy things they feel represent their identities and class.
Purchases motivated by class serve purposes related to personal enrichment and, more importantly, self-esteem. The social class concept introduced to marketing literature shows that the real or perceived social class in which a person belongs will influence the type of good...
6 Pages(1500 words)Assignment
sponsored ads
Save Your Time for More Important Things
Let us write or edit the essay on your topic "Freges Puzzle of Identity Statements" with a personal 20% discount.
GRAB THE BEST PAPER

Let us find you another Essay on topic Freges Puzzle of Identity Statements for FREE!