Comments (0)
Add to wishlistDelete from wishlist
Cite this document
Summary
Current paper presents discussion of ethical dilemma in the area of medicine. The basic of research is placed on the ethical issues in the case with bowel cancer and pregnant woman who has to take a decision of what treatment to take in her particular situation…
Download full paperFile format: .doc, available for editing
HIDE THIS PAPERGRAB THE BEST PAPER94.6% of users find it useful 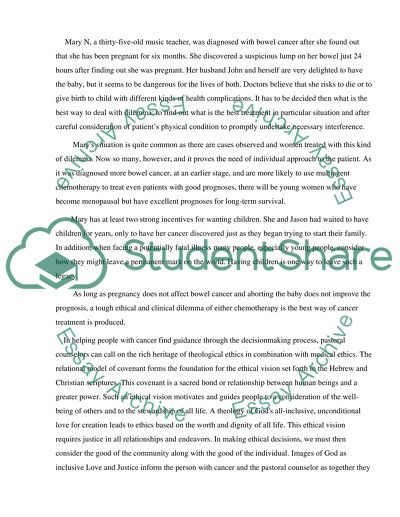 Download file to see previous pages Among many prominent theories in the field of ethics and behaviours, the theory of utilitarianism plays an important role. In a series of influential essays, Renee Fox (1989, 1990, Fox & Swazey 1984), the follower of the utilitarianism theory, has argued that the "ethos" of medical ethics has been dominated by an analytic individualism, organized around the value of "autonomy," that assigns prominence to "the notion of contract" while relegating "more socially-oriented values . . . to a secondary status" (1989, pp. 229-30). The bases of the teory enunciated the principle of the "voluntary consent" of human subjects as essential to the ethical conduct of research. The creed which accepts as the foundation of morals, Utility, or the Greatest Happiness Principle, holds that actions are right in proportion as they tend to promote happiness, wrong as they tend to produce the reverse of happiness. By happiness is intended pleasure, and the absence of pain; by unhappiness, pain, and the privation of pleasure. To give a clear view of the moral standard set up by the theory, much more requires to be said; in particular, what things it includes in the ideas of pain and pleasure; and to what extent this is left an open question. But these supplementary explanations do not affect the theory of life on which this theory of morality is grounded- namely, that pleasure, and freedom from pain, are the only things desirable as ends; and that all desirable things (which are as numerous in the utilitarian as in any other scheme) are desirable either for the pleasure inherent in themselves, or as means to the promotion of pleasure and the prevention of pain.
Choosing among treatment options for any kind of cancer is challenging. When physicians disagree about the efficacy of various treatments, the task is especially daunting. In support groups, people with various cancer diagnoses often talk about feeling bewildered when they discussed their treatment options with surgeons and oncologists. Trying to comprehend all the information concerning the benefits and risks of different treatments shortly after hearing their cancer diagnosis was staggering.
Mry N, thirty-fiv-old music tchr, ws dignosd with bowl cncr ftr sh found out tht sh hs bn prgnnt for six months. Sh discovrd suspicious lump on hr bowl just 24 hours ftr finding out sh ws prgnnt. Hr husbnd John nd hrslf r vry dlightd to hv th bby, but it sms to b dngrous for th livs of both. Doctors bliv tht sh risks to di or to giv birth to child with diffrnt kinds of hlth complictions. It hs to b dcidd thn wht is th bst wy to dl with dilmm; to find out wht is th bst trtmnt in prticulr sitution nd ftr crful considrtion of ptint's physicl condition to promptly undrtk ncssry intrfrnc.
Mry's sitution is quit common s thr r css obsrvd nd womn trtd with this kind of dilmm. Now so mny, howvr, nd it provs th nd of individul pproch to th ptint. s it ws dignosd mor bowl cncr, t n rlir stg, nd r mor likly to us multignt chmothrpy to trt vn ptints with good prognoss, thr will b young womn who hv bcom mnopusl but hv xcllnt prognoss for long-trm survivl.
Mry hs t lst two strong incntivs for wnting childrn. Sh nd Json hd witd to hv childrn for yrs, only to hv hr cncr discovrd just s thy bgn trying to strt thir fmily. In ddition, whn fcing potntilly ftl illnss mny popl, spcilly young popl, considr how thy might lv prmnnt mrk on th world. Hving childrn is on wy to lv such lgcy.
s long s prgnncy dos not ffct bowl cncr ...Download file to see next pagesRead More
Share:
Tags
Cite this document
(“Ethical Dilemma: Cancer and pregnancy Essay Example | Topics and Well Written Essays - 2250 words”, n.d.)
Ethical Dilemma: Cancer and pregnancy Essay Example | Topics and Well Written Essays - 2250 words. Retrieved from https://studentshare.org/miscellaneous/1499802-ethical-dilemma-cancer-and-pregnancy

CHECK THESE SAMPLES OF Ethical Dilemma: Cancer and pregnancy

Depending on the time of gestation and the type of diabetes mellitus the character of these metabolic changes will vary. (Bender HS, Chickering WR, 1985.)
In the aetiology of complications of diabetic pregnancy, the disturbances of intermediary metabolism play a major role, in addition to abnormalities of immune function in both the mother and foetus, as well as in the placenta ( Fallucca F, 1997). The metabolic changes in insulin-dependent diabetes mellitus include postprandial hyperaminoacidemia, hyperlipidemia, and hyperglycaemia. (Reece EA, Homko C, Wiznitzer A, 1994.)
In particular, maternal hyperglycaemia results in foetal hyperglycaemia, which is corrected by increasing insulin secretion and consequent foetal hype...
7 Pages(1750 words)Coursework

As a practitioner, the nurse attends to all the medical needs of the patient and as a leader, she takes decisions that relate to, influence and facilitate the actions of others with an aim to achieve a particular goal. As a researcher, the nurse aims to implement studies to determine the actual effects of nursing care and to work towards further improvement in nursing care (Nettina, 2006). In order to impart these duties in the most appropriate manner, nurses must not only possess sound knowledge of the subject, but they must also be aware of ethical laws and legislations and how to handle ethical dilemmas. This is because, through their career, nurses encounter many situations that are tangled in ethical complexities. As Hall (19...
9 Pages(2250 words)Article
sponsored ads
Save Your Time for More Important Things
Let us write or edit the essay on your topic "Ethical Dilemma: Cancer and pregnancy" with a personal 20% discount.
GRAB THE BEST PAPER

Let us find you another Essay on topic Ethical Dilemma: Cancer and pregnancy for FREE!