Looking at the primary documents in Gjerde, p. 275290, compare how the authors define and describe certain ethnic groups. Then, looking at John Higham and Hane - Essay Example

Comments (0)
Add to wishlistDelete from wishlist
Cite this document
Summary
Certainly there is a sound enough basis for doubting the validity of generalizations about national character (Gjerde, 1998). To begin with, many of these generalizations have been derived not from any dispassionate observation or any quest for truth, but from superheated patriotism which sought only to glorify one national group by invidious comparison with other national groups, or from a pseudoscientific racism which claimed innately superior qualities for favored ethnic groups…
Download full paperFile format: .doc, available for editing
HIDE THIS PAPERGRAB THE BEST PAPER97.3% of users find it useful 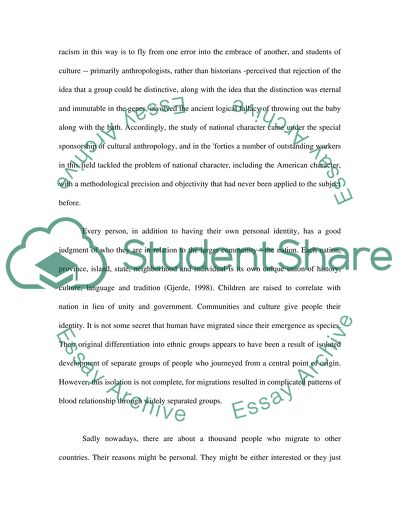 Extract of sample "Looking at the primary documents in Gjerde, p. 275290, compare how the authors define and describe certain ethnic groups. Then, looking at John Higham and Hane"

Download file to see previous pages Between the chauvinistic purposes for which the concept of national character was used, and the irrationality with which it was supported, it fell during the 1930's into a disrepute from which it has by no means fully recovered.
The Skepticism of John Higman, the conflicting nature of the images of the American as an individualistic democrat or as a conformist democrat would have seemed simply to illustrate further the already demonstrated flimsiness and fallacious quality of all generalizations about national character (Gjerde, 1998). According to Haney-Lopez, the inhabitants of one country may, as a group, evince a given trait in higher degree than the inhabitants of some other country amounts almost to a denial that the culture of one people can be different from the culture of another people. To escape the pitfalls of racism in this way is to fly from one error into the embrace of another, and students of culture -- primarily anthropologists, rather than historians -perceived that rejection of the idea that a group could be distinctive, along with the idea that the distinction was eternal and immutable in the genes, involved the ancient logical fallacy of throwing out the baby along with the bath. Accordingly, the study of national character came under the special sponsorship of cultural anthropology, and in the 'forties a number of outstanding workers in this field tackled the problem of national character, including the American character, with a methodological precision and objectivity that had never been applied to the subject before.
Every person, in addition to having their own personal identity, has a good judgment of who they are in relation to the larger community-the nation. Each nation, province, island, state, neighborhood and individual is its own unique union of history, culture, language and tradition (Gjerde, 1998). Children are raised to correlate with nation in lieu of unity and government. Communities and culture give people their identity. It is not some secret that human have migrated since their emergence as species. Their original differentiation into ethnic groups appears to have been a result of isolated development of separate groups of people who journeyed from a central point of origin. However, this isolation is not complete, for migrations resulted in complicated patterns of blood relationship through widely separated groups.
Sadly nowadays, there are about a thousand people who migrate to other countries. Their reasons might be personal. They might be either interested or they just want to experience new cultures in other places. Or simply because they got tired of the place they situated and want to experience something new. Migration in a sense means the breaking up and scattering of a people. While this may be advantageous to many people who have good reasons for migrating, it also affects the traditions of the place they're leaving . (Gjerde, 1998)
Sources say that the rate of migration has increased. Although, there were some minor differences between them by size of vicinity. It is recognized that most males would likely go to a medium-size and extra large ...Download file to see next pagesRead More
Share:
Tags
Cite this document
(“Looking at the primary documents in Gjerde, p. 275290, compare how the Essay”, n.d.)
Looking at the primary documents in Gjerde, p. 275290, compare how the Essay. Retrieved from https://studentshare.org/miscellaneous/1499729-looking-at-the-primary-documents-in-gjerde-p-275290-compare-how-the-authors-define-and-describe-certain-ethnic-groups-then-looking-at-john-higham-and-hane

“Looking at the Primary Documents in Gjerde, P. 275290, Compare How the Essay”, n.d. https://studentshare.org/miscellaneous/1499729-looking-at-the-primary-documents-in-gjerde-p-275290-compare-how-the-authors-define-and-describe-certain-ethnic-groups-then-looking-at-john-higham-and-hane.
Comments (0)
Click to create a comment or rate a document

CHECK THESE SAMPLES OF Looking at the primary documents in Gjerde, p. 275290, compare how the authors define and describe certain ethnic groups. Then, looking at John Higham and Hane

6 Pages(1500 words)Coursework
sponsored ads
Save Your Time for More Important Things
Let us write or edit the essay on your topic "Looking at the primary documents in Gjerde, p. 275290, compare how the authors define and describe certain ethnic groups. Then, looking at John Higham and Hane" with a personal 20% discount.
GRAB THE BEST PAPER

Let us find you another Essay on topic Looking at the primary documents in Gjerde, p. 275290, compare how the authors define and describe certain ethnic groups. Then, looking at John Higham and Hane for FREE!