The US Congress - Essay Example

Comments (0)
Add to wishlistDelete from wishlist
Cite this document
Summary
Upon preview the websites on four members of Congress: Senator Trent Lott from Mississippi, Senator Arlen Spector from Pennsylvania, Congressman Roger Wicker from Mississippi and Congressman Jerry Lewis from California there were many similarities content-wise…
Download full paperFile format: .doc, available for editing
HIDE THIS PAPERGRAB THE BEST PAPER93.9% of users find it useful 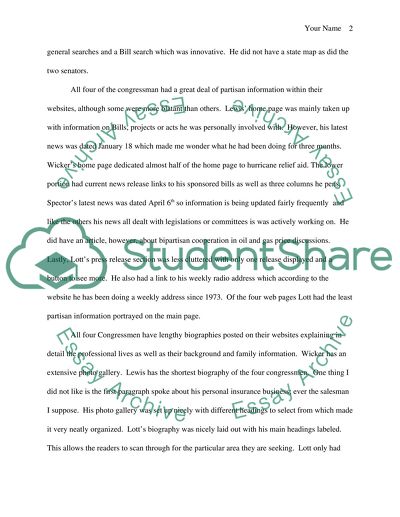 Extract of sample "The US Congress"

Download file to see previous pages Senator Spector's website contained the same constituency topics; including flags, touring DC, appointments to military academies and internships; and actually had one more than Lott - how to get grants. His home page though was a bit more crowded and the major topic buttons were not as easily recognizable as Lott's; to his benefit, though, he had an email signup form on the front page and his office locations and phone numbers. Unlike Lott's page though, Spector had no search bar. The information on Wicker's home page was sparse at best. His navigation buttons were difficult to read and small which could make it very difficult for an older person. Also his main topic buttons had no drop down menus and instead of grouping categories together he too many individual tabs. He had no search bar. Lastly, Lewis' webpage was set up nicely. His category buttons were easy to locate, although they did not have drop down menus. He did, however, have two search bars: one for general searches and a Bill search which was innovative. He did not have a state map as did the two senators.
All four of the congressman had a great deal of partisan information within their websites, although some were more blatant than others. Lewis' home page was mainly taken up with information on Bills, projects or acts he was personally involved with. However, his latest news was dated January 18 which made me wonder what he had been doing for three months. Wicker's home page dedicated almost half of the home page to hurricane relief aid. The lower portion had current news release links to his sponsored bills as well as three columns he pens. Spector's latest news was dated April 6th so information is being updated fairly frequently and like the others his news all dealt with legislations or committees is was actively working on. He did have an article, however, about bipartisan cooperation in oil and gas price discussions. Lastly, Lott's press release section was less cluttered with only one release displayed and a button to see more. He also had a link to his weekly radio address which according to the website he has been doing a weekly address since 1973. Of the four web pages Lott had the least partisan information portrayed on the main page.
All four Congressmen have lengthy biographies posted on their websites explaining in detail the professional lives as well as their background and family information. Wicker has an extensive photo gallery. Lewis has the shortest biography of the four congressmen. One thing I did not like is the first paragraph spoke about his personal insurance business; ever the salesman I suppose. His photo gallery was set up nicely with different headings to select from which made it very neatly organized. Lott's biography was nicely laid out with his main headings labeled. This allows the readers to scan through for the particular area they are seeking. Lott only had one photo, his official Senate photo. Spector's biography was also nicely laid out clear and concise with nice visual representations. Spector also had no photo gallery which made me question if it was a Senate mandated, a Senate unofficial mandate or just a coincidence.
Of the total appearance of the websites, by far, the most appealing was that of Lott. He had much better use of space. The pages did not seem as cluttered as that of Wicker and Lewis. Spector's page was laid out well too, ...Download file to see next pagesRead More
Share:
Tags
Cite this document
(“The US Congress Essay Example | Topics and Well Written Essays - 750 words”, n.d.)
Retrieved from https://studentshare.org/miscellaneous/1499635-the-us-congress

“The US Congress Essay Example | Topics and Well Written Essays - 750 Words”, n.d. https://studentshare.org/miscellaneous/1499635-the-us-congress.
Comments (0)
Click to create a comment or rate a document

CHECK THESE SAMPLES OF The US Congress

A healthy person is not difficult to define. He or she is a person who does his chores regularly...
10 Pages(2500 words)Term Paper

These contribute to several challenges faced by the IC today1.
For example, the Japanese fleet’s attack on Pearl Harbor, which was a surprise attack and the subsequent entrance of America into the Second World War, illustrated the need to re-engineer the outdated policies and organization of the IC. The changes made by the U.S. in the IC, which occasioned from World War II are still palpable today2. Some changes were later made when the Senate Committees came together with the aim of investigating the Central Intelligence Agency (CIA), National Security Agency (NSA), Federal Bureau of Investigation (FBI), and Internal Revenue Service (IRS) to evaluate the possible abuses of power that transpired in the preceding years.<...
9 Pages(2250 words)Assignment

Unfortunately the United States into a new debt in the Second World War. In 1941, the gross domestic product was 45 percent; it rose up to 119 percent in 1946 probably at the end of t...
6 Pages(1500 words)Assignment
sponsored ads
Save Your Time for More Important Things
Let us write or edit the essay on your topic "The US Congress" with a personal 20% discount.
GRAB THE BEST PAPER

Let us find you another Essay on topic The US Congress for FREE!