Comments (0)
Add to wishlistDelete from wishlist
Cite this document
Summary
Tourism development is a wide-ranging activity that should never be divorced from a serious and concerned examination of environment and society. In fact, the development system consists, at a minimum, of a mixed system of elements and linkages derived from the economy, environment, and society…
Download full paperFile format: .doc, available for editing
HIDE THIS PAPERGRAB THE BEST PAPER94.2% of users find it useful 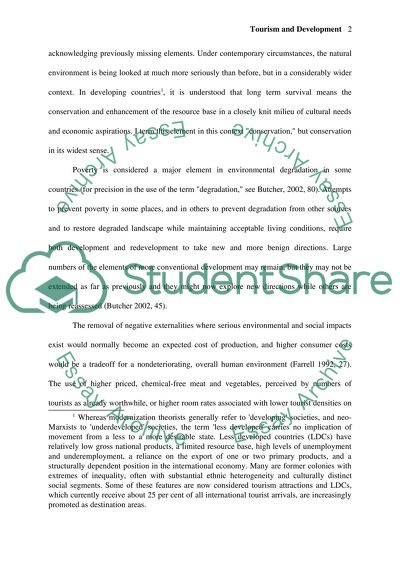 Extract of sample "Tourism and Development"

Download file to see previous pages Regrettably, many environmentalists seem unaware of this fact. This once again points to the necessity, for policy makers, managers, and scholars alike, to subscribe to an integrated systemic approach.
Within this integrated approach to the development system are the three critically important and interdependent subsystems: economy, environment (conservation), and culture (including society). Taken together, the expanded system illuminates and in practical terms largely equates with the total environment, the total ecosystem, or more precisely the human environment, as an operational system (Gartner 1999, 117; Smith & Eadington 1992, 92). To think narrowly of the human world order in terms such as the "natural environment perturbed by human agencies" omits so much, is unrealistic and artificial, destroys an integrated approach, and by its restrictiveness all but denies sustainability in its non-fundamentalist new sense (West 2004, 307). At the other extreme, to think narrowly in terms of tourist management concerned only with tourism supply, demand, infrastructure, and consumers, in other words "the industry," is to sadly misinterpret today's realities.
To view development in the matrix of the development system does not dilute attention to the economy or natural environment; rather, it adds significantly by acknowledging previously missing elements. Under contemporary circumstances, the natural environment is being looked at much more seriously than before, but in a considerably wider context. In developing countries1, it is understood that long term survival means the conservation and enhancement of the resource base in a closely knit milieu of cultural needs and economic aspirations. I term this element in this context "conservation," but conservation in its widest sense.
Poverty is considered a major element in environmental degradation in some countries (for precision in the use of the term "degradation," see Butcher, 2002, 80). Attempts to prevent poverty in some places, and in others to prevent degradation from other sources and to restore degraded landscape while maintaining acceptable living conditions, require both development and redevelopment to take new and more benign directions. Large numbers of the elements of more conventional development may remain, but they may not be extended as far as previously and they might now explore new directions while others are being reassessed (Butcher 2002, 45).
The removal of negative externalities where serious environmental and social impacts exist would normally become an expected cost of production, and higher consumer costs would be a tradeoff for a nondeteriorating, overall human environment (Farrell 1992, 27). The use of higher priced, chemical-free meat and vegetables, perceived by numbers of tourists as already worthwhile, or higher room rates associated with lower tourist densities on environmentally sensitive land would be examples. But for the tourism operator, all would not be lost by any means. What might appear a setback in one area can be an unexpected surprise in another. Interesting tradeoffs may arise, such as specialized eco-tourism (Mowforth & Munt 2003, 112). Other examples include tourism protecting or reinforcing the protection of wildlife in Kenya, gorillas and chimpanzees in Zaire (World Wildlife Fund-Conservation Foundation 1988 cited in Smith 2003, 33), harp seals in Labrador, wetlands in ...Download file to see next pagesRead More
Share:
Tags
Cite this document
(“Tourism and Development Essay Example | Topics and Well Written Essays - 2000 words”, n.d.)
Tourism and Development Essay Example | Topics and Well Written Essays - 2000 words. Retrieved from https://studentshare.org/miscellaneous/1499627-tourism-and-development

CHECK THESE SAMPLES OF Tourism and Development

Researches show that Senegal was inhabited in ancient times. Islam occupied the land as early as the 11th century thus making many Senegalese to be Muslims. The French So...
7 Pages(1750 words)Assignment
sponsored ads
Save Your Time for More Important Things
Let us write or edit the essay on your topic "Tourism and Development" with a personal 20% discount.
GRAB THE BEST PAPER

Let us find you another Essay on topic Tourism and Development for FREE!