Comments (0)
Add to wishlistDelete from wishlist
Cite this document
Summary
The pathogenic Salmonella species are a group of intracellular gram-negative bacteria that are known to be the cause of a wide range of diseases across the globe. The subspecies enterica in particular is alleged to cause about 99 percent of these pathological conditions…
Download full paperFile format: .doc, available for editing
HIDE THIS PAPERGRAB THE BEST PAPER98.6% of users find it useful 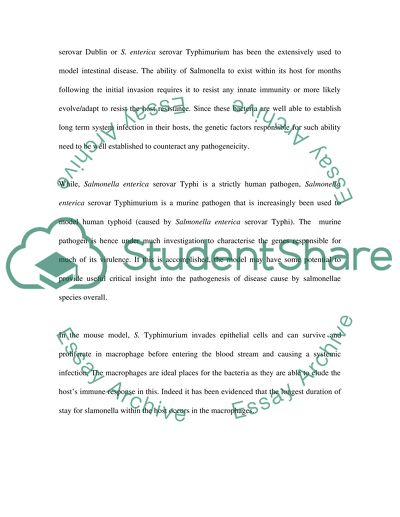 Download file to see previous pages In this respect animal models of the disease process being caused by Salmonella have proved to be quite useful.
The process by which Salmonella invades and then onwards maintains itself in the host species is not only a complicated but indeed and intriguing process. It is also an example of adaptive evolution and selective preservation of a genotype. Given its prevalence across a range of warm blooded hosts it has been possible to study the infection and virulence factors in several species. For instance while, murine infection with Salmonella enterica serovar typhimurium has been used largely to replicate human typhoid (caused by Salmonella enterica serovar Typhi), bovine infection caused by Salmonella enterica serovar Dublin or S. enterica serovar Typhimurium has been the extensively used to model intestinal disease. The ability of Salmonella to exist within its host for months following the initial invasion requires it to resist any innate immunity or more likely evolve/adapt to resist the host resistance. Since these bacteria are well able to establish long term system infection in their hosts, the genetic factors responsible for such ability need to be well established to counteract any pathogeneicity.
While, Salmonella enterica serovar Typhi is a strictly human pathogen, Salmonella enterica serovar Typhimurium is a murine pathogen that is increasingly been used to model human typhoid (caused by Salmonella enterica serovar Typhi). ...
In the mouse model, S. Typhimurium invades epithelial cells and can survive and proliferate in macrophage before entering the blood stream and causing a systemic infection. The macrophages are ideal places for the bacteria as they are able to elude the host's immune response in this. Indeed it has been evidenced that the longest duration of stay for slamonella within the host occurs in the macrophages.
However for the most part understanding of the murine salmonella species has been limited to the Nramp1 susceptible (Nramp1s) mouse strains i.e. the BALB/c and C57Bl/6. Macrophages from Nramp1s mice permit a much higher rate of serovar Typhimurium replication in vitro as well as in vivo as compared to Nramp1r (Nramp1 is functional) macrophages. While this has upuntil date allowed for observation of the diseased condition, the hosts (mice) invariably are most severly affected by the bacteteria considerabily limiting the scope of study.
The paper here however focuses on the novel Salmonella persistence model based on the mouse strain 129X1/SvJ (Nramp1r), which are typically resistant to the replication of the bacteria not succumbing easily to the virulence. Consequently the bacteria can be obtained from systemic sites even up to an year post infection which would help to increase the time spectrum of study if need be.
Clearly as intricate an adaptive mechanism as seen in the samlonella species would require the contribution of several genes and virulence factors.The invasion-associated genes are required for intestinal secretory and inflammatory disease, that intracellular survival in both the intestinal epithelium and macrophages is essential for ...Download file to see next pagesRead More
Share:
Tags
Cite this document
(“Genome-wide screen for Salmonella genes required for long-term Essay”, n.d.)
Retrieved from https://studentshare.org/miscellaneous/1499535-genome-wide-screen-for-salmonella-genes-required-for-long-term-systemic-infection-of-the-mouse

Key Factors of Leadership Required In the Management of Change

Leadership is associated with larger-than-life characteristics. It is most important for complex organizations operating in changing environments. One needs to analyze the basic motivations for change because it includes human beings. Timothy Galpin (1996) describes the human elements of change, covering an organization-wide area.
Healthcare organizations need constant maneuvering into the future and change. John (1990) states, “Leadership is an ability to influence followers that involves the use of power and the acceptance of the leader by the followers. This ability to influence followers is related to the followers’ need satisfaction.”

Should the U.S Navy Be Required to Standardize the Flight Operations Quality Assurance

This factor points to the increased role of data regarding operations and quality of the flights. It requires methods for detecting errors and capturing error contexts, as well as methods for reducing errors and mitigating their effects. In the maintenance of flight safety data Flight Operational Quality Assurance (FOQA) programs are of special mention. “FOQA programs use flight data collected during a carrier’s normal line operations to reduce costs and enhance safety by identifying a variety of ‘exceedances’- deviations of important flight parameters from normal operating ranges. FOQA programs typically use commercial Ground Data Replay and Analysis Systems (GDRASs) to detect specified deviations, generat...
6 Pages(1500 words)Term Paper

... there are a number of employees who resist change and are unwilling to accept any change of any kind. Use of Good Practice: Being a manager does not require training for leadership skills, or having a set number of principles for a job or set systems. It is important to understand that theories that have been developed over the years are only meant for references and not to be used as a bible for every move. Policies and Procedures: In every company, or even a group of companies, nothing ever happens unless there’s a simple policy or procedure for making the thing happen. These policies and procedures should be set out and should include, what should happen, who needs to manage it, how it should take place, how it is monitored, etc. need...
8 Pages(2000 words)Assignment
sponsored ads
Save Your Time for More Important Things
Let us write or edit the essay on your topic "Genome-wide screen for Salmonella genes required for long-term systemic infection of the mouse" with a personal 20% discount.
GRAB THE BEST PAPER

Let us find you another Essay on topic Genome-wide screen for Salmonella genes required for long-term systemic infection of the mouse for FREE!