Comments (0)
Add to wishlistDelete from wishlist
Cite this document
Summary
Chris Petersen, one of Virginia's most able legislators, was a patron of the Senate bill that repealed abusive driver fees. Chris Petersen had the opportunity to write the final version of the bill that had been passed.
His next legislative goal is Petersen's Clean Energy Future Act, which sets benchmarks for increasing alternative energy usage statewide, reducing current usage and creating a fund for energy research and development…
Download full paperFile format: .doc, available for editing
HIDE THIS PAPERGRAB THE BEST PAPER91.8% of users find it useful 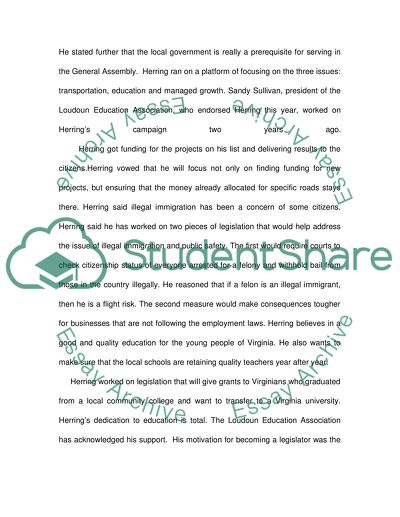 Download file to see previous pages He stated that he tends to be one of those people who get very passionate about issues, and he is not afraid to stand up and speak.
Herring stated that the reason why he had voted against the original transportation package because it shifted most of the responsibility off of the state legislature and onto the local governments. He thought that the original bill is unworkable.
He stated further that the local government is really a prerequisite for serving in the General Assembly. Herring ran on a platform of focusing on the three issues: transportation, education and managed growth. Sandy Sullivan, president of the Loudoun Education Association, who endorsed Herring this year, worked on Herring's campaign two years ago.
Herring got funding for the projects on his list and delivering results to the citizens.Herring vowed that he will focus not only on finding funding for new projects, but ensuring that the money already allocated for specific roads stays there. Herring said illegal immigration has been a concern of some citizens. Herring said he has worked on two pieces of legislation that would help address the issue of illegal immigration and public safety. ...
The first would require courts to check citizenship status of everyone arrested for a felony and withhold bail from those in the country illegally. He reasoned that if a felon is an illegal immigrant, then he is a flight risk. The second measure would make consequences tougher for businesses that are not following the employment laws. Herring believes in a good and quality education for the young people of Virginia. He also wants to make sure that the local schools are retaining quality teachers year after year.
Herring worked on legislation that will give grants to Virginians who graduated from a local community college and want to transfer to a Virginia university.
Herring's dedication to education is total. The Loudoun Education Association has acknowledged his support. His motivation for becoming a legislator was the same as his motivation for becoming a lawyer. He said that helping people solve their problems motivates him as a legislator.
Senator Herring fought hard to repeal the abusive driver fees. Then he therefore, co-sponsored Senate Bill 1. Senate Bill 1 is a bill which would not only repeal the abusive driver fees but it would also refund with interest any fees that drivers have already paid. The hated abusive driver fees were the wrong approach to trying to solve the transportation problems of Virginia. The consequent impact studies on the abusive driver fees have shown they have not been effective at deterring bad driving behavior. Herring aims to continue to work with other members to try to find ways to improve the transportation funding package. To help restore the public trust in the land use process, he introduced a ...Download file to see next pagesRead More
Share:
Tags
Cite this document
(“Evaluate Legislators in Manassas, Virginia (United States) Essay”, n.d.)
Evaluate Legislators in Manassas, Virginia (United States) Essay. Retrieved from https://studentshare.org/miscellaneous/1499104-evaluate-legislators-in-manassas-virginia-united-states

For example, for farming communities, fertile and well-watered land has been a pull factor in migration. Business opportunities and political stability are also examples of pull factors.
Since the turn of the 20th century, Great Britain and Northern Ireland have experienced a great influx of foreigners migrating into the country due to pull or push factors. There have been different waves of migrations to the United Kingdom, which has had different impacts. Because of this, the United Kingdom has had to respond in several ways, which includes coming up with new acts on immigration, nationality, and providing asylum to refugees.1 However, the topic of migration to the United Kingdom has attracted different political views and...
23 Pages(5750 words)Assignment
sponsored ads
Save Your Time for More Important Things
Let us write or edit the essay on your topic "Evaluate Legislators in Manassas, Virginia (United States)" with a personal 20% discount.
GRAB THE BEST PAPER

Let us find you another Essay on topic Evaluate Legislators in Manassas, Virginia (United States) for FREE!