Comments (0)
Add to wishlistDelete from wishlist
Cite this document
Summary
The purpose of this paper example "Cultural Background And Belief In Astrology" is to research the cross-cultural background impacts on the science of astrology, and determine whether culture has any significant impact on an individual person’s belief in astrology. …
Download full paperFile format: .doc, available for editing
HIDE THIS PAPERGRAB THE BEST PAPER94.4% of users find it useful 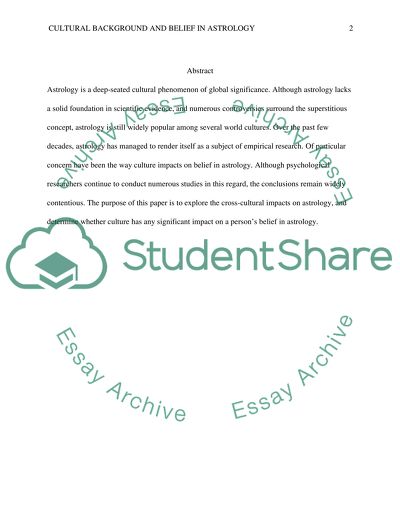 Extract of sample "Cultural Background And Belief In Astrology"

Download file to see previous pages Numerous studies claim that the existence of scientific validity to back the form of astrology common in the West is conspicuously absent. Moreover, sources purporting that there is empirical evidence to support the authenticity of astrology in the West lacks scientific verification. Because of this, the question as to why people still belief in astrology while reality indicates that there is no truth to it arouses enormous scientific curiosity. A possible approach to unraveling the enigma would be to examine the interplay of factors that define social inclinations that weigh on belief in astrology. In particular, there has been a considerably level of controversy with regard to belief in astrology and cultural backgrounds.
Some previous studies have studied astrology and culture and reached intriguing conclusions. For example, Dambrun (2004) claimed a strong positive correlation between belief astrology and racial bigotry, sexism, and negative attitudes towards marginalized societal groupings. The cross-cultural research suggested that strong believers in astrology consequently had stronger ascriptions to societal stereotypes and social tagging. Other studies have put their focus in finding the interrelation between faith in superstition and cultural inclinations. This project seeks to study cultural effects on astrology using the Chinese and the Western culture.
According to a study by Beck and Forstmeier (2007), superstition deserves treatment as an interesting subject of science.
The observation was born of the realization that regardless of the little empirical basis for its validity, many people harbor strong beliefs in astrology, and continue to read their astrology profiles. For instance, a large proportion of people knows their astrological signs and read them on a regular basis (Rogers & Glendon, 2010). In the past, studies have successfully demonstrated that the belief is attributable to the fact that the astrology sign profiles appear believable to most people when they most echo their personalities. The phenomenon now also known as ‘the Barnum effect’, and has been validated in numerous interdisciplinary studies touching on the military, occupational, educational, and clinical aspects of psychology (Rogers & Soule, 2009). The belief in Barnum’s effect has won support of many researchers. For instance, the effect was also noticeable by studies by Hamilton (2000), which demonstrated greater acceptance of astrology when the descriptions had higher favorableness. The choice of profile, negative or positive, affects to some extent the way the respondents feel towards astrology in general. However, the relationship is yet to undergo comprehensive empirical research, and further validates ‘the Barnum effect’. Ever since, the effect has been an inspiration in the context of cross-cultural studies on its claims for its worldwide applicability. Cross-Cultural differences and Belief in Astrology Overwhelming evidence implies that ‘the Barnum effect’ is a global phenomenon. Studies comparing the acceptance of ast ...Download file to see next pagesRead More
Share:
Tags
Cite this document
(“Cultural Background And Belief In Astrology Research Paper”, n.d.)
Retrieved from https://studentshare.org/miscellaneous/1449115-research-report-based-on-the-analysis-of-data

“Cultural Background And Belief In Astrology Research Paper”, n.d. https://studentshare.org/miscellaneous/1449115-research-report-based-on-the-analysis-of-data.
Comments (0)
Click to create a comment or rate a document

CHECK THESE SAMPLES OF Cultural Background And Belief In Astrology

Beowulf: The Poem, Its Background and Its Style

Despite its age and seeming isolation, the Beowulf poet seems to have been familiar with the Christian religion and its symbols. Perhaps because it was written down by scribes, who were most likely associated with the church, it gained its Christian concepts or perhaps these symbols from the Old Testament were present in the poem beforehand. An examination of the Christian overtones and fundamental principles of the story reveals that the Old Heroic Code actually had much in common with the Christian ideals and provides a context by which the modern world can begin to see how the Christian religion incorporated itself into ancient English society. The behavior of characters in an epic such as Beowulf typically makes a clear distin...
10 Pages(2500 words)Term Paper

As a function of this, this book proved to be a pivotal and seminal work within the genre of cross-cultural understanding as, even though it was a novel, it helped to open the eyes of many in and around the country as to the unique set of situations that individuals experienced as a function of not only being bi-racial and living in a juxtaposition of two alternate societies but attempting to draw a sense of personal identity between the two and forging a third as a result. Furthermore, although not the express intent of the book, the issues of assimilation and the firm choice that the second generation immigrant must make between the culture of their parents and the unique aspects of the culture that they have been raised into.
sponsored ads
Save Your Time for More Important Things
Let us write or edit the research paper on your topic "Cultural Background And Belief In Astrology" with a personal 20% discount.
GRAB THE BEST PAPER

Let us find you another Research Paper on topic Cultural Background And Belief In Astrology for FREE!