Comments (0)
Add to wishlistDelete from wishlist
Cite this document
Summary
The author dwells on the topic of fashion. The special attention is focused on fashion houses of brand clothes, smaller fashion houses that create replica of brand clothes at lower prices, the copyright protection of fashion houses and historic development of fashion laws in the USA…
Download full paperFile format: .doc, available for editing
HIDE THIS PAPERGRAB THE BEST PAPER93% of users find it useful 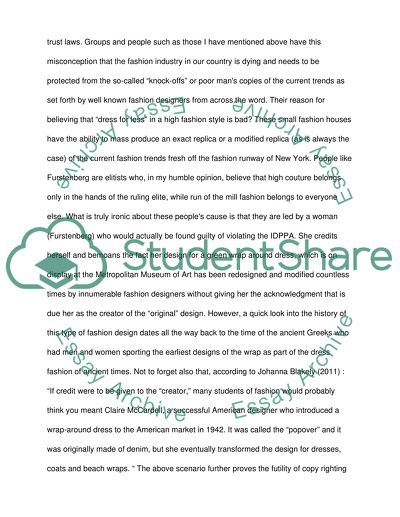 Download file to see previous pages The main topic of the work is to study “high” fashion and mass production fashion in the USA. The goal of the work is to describe the core mechanism of new fashion ideas appearance and how it is related to copyright laws. It is through the practice of taking the design of one and re-imagining it that the fashion industry in America manages to thrive and exist even during the times of depression. The conclusion the writer makes is fashion for both men and women can only presented a certain number of ways. The only thing that keeps the design fresh and innovative are the various small modifications made by other designs based upon their predecessors work or their current imagination. The author points out that smaller fashion houses thrive on the basis of free enterprise and competition which allows fashion not to become an overpriced, elitist representation of modern civilization that can only be afforded by a few. The author also studies the problems of fashion industry in the USA. The real problem in the fashion industry is not the fact that designers get “inspiration” from one another, but rather, that there are unscrupulous individuals who copy their labels which are protected under the trademark laws. The fashion industry of America does not need protecting, it thrives under the copycat enterprise. Those small fashion houses that create modified versions of the current trends don't misrepresent the items as high fashion. The actual harm comes from the fake designer label fashion originating in Asia that poses the real threat to fashion industry. . ...
These small fashion houses have the ability to mass produce an exact replica or a modified replica (as is always the case) of the current fashion trends fresh off the fashion runway of New York. People like Furstenberg are elitists who, in my humble opinion, believe that high couture belongs only in the hands of the ruling elite, while run of the mill fashion belongs to everyone else. What is truly ironic about these people's cause is that they are led by a woman (Furstenberg) who would actually be found guilty of violating the IDPPA. She credits herself and bemoans the fact her design for a green wrap around dress, which is on display at the Metropolitan Museum of Art has been redesigned and modified countless times by innumerable fashion designers without giving her the acknowledgment that is due her as the creator of the “original” design. However, a quick look into the history of this type of fashion design dates all the way back to the time of the ancient Greeks who had men and women sporting the earliest designs of the wrap as part of the dress fashion of ancient times. Not to forget also that, according to Johanna Blakely (2011) : “If credit were to be given to the “creator,” many students of fashion would probably think you meant Claire McCardell, a successful American designer who introduced a wrap-around dress to the American market in 1942. It was called the “popover” and it was originally made of denim, but she eventually transformed the design for dresses, coats and beach wraps. “ The above scenario further proves the futility of copy righting a design to only one person for a period of 3 years as prescribed in the IDPPA. One only has to realize that fashion in every sense of the ...Download file to see next pagesRead More
Share:
Tags
Cite this document
(“Copy Protection Of Fashion Design Is A Futile Exercise Speech or Presentation”, n.d.)
Retrieved from https://studentshare.org/miscellaneous/1430294-copy-protection-of-fashion-design-is-a-futile-exercise

John Galliano was born in Gibraltar in 1960 and spent his early years in a Spanish Roman Catholic home. His mother was Spanish and his father was English, partially explaining why the family moved to London in 1966. Although the family did not always have much money, Galliano’s mother was scrupulously neat and ensured her children were always immaculately dressed before going out, even when only going to the corner store. Galliano credits this early emphasis on appearance for his love of fine clothing and his sense of the Baroque. With his talents and vision being recognized early, Galliano was able to study art and design at various schools, finally presenting his final year show at Central St. Martin’s School of Art...
6 Pages(1500 words)Essay

On the other hand, the change in the forms of employment has led to a decrease in employees’ performance in the high percentage of organizations internationally. Towards this direction, McGovern et al. (2004, 225) stated that ‘the rapid growth in nonstandard forms of employment toward the end of the 20th century has fuelled claims about the spread of "bad jobs" within Anglo-American capitalism; research from the United States indicates that such jobs have more bad characteristics than do permanent jobs after controlling for workers’. In other words, the bad conditions in the workplace – lack of communication and cooperation among the employees - but also between the employees and the firm’s owners - l...
13 Pages(3250 words)Term Paper

English being globally considered and established as the ‘lingua franca’ whether in terms of international communications or technological interrelations, hence English as the second language is extensively popularized and most sought after language...
7 Pages(1750 words)Research Paper
sponsored ads
Save Your Time for More Important Things
Let us write or edit the speech or presentation on your topic "Copy Protection Of Fashion Design Is A Futile Exercise" with a personal 20% discount.
GRAB THE BEST PAPER

Let us find you another Speech or Presentation on topic Copy Protection Of Fashion Design Is A Futile Exercise for FREE!