Comments (0)
Add to wishlistDelete from wishlist
Cite this document
Summary
This essay talks that the existing regulatory processes have lost their meaning owing to the constant modifications made to the structure of a modern corporate house. Besides these, the ‘do-nothing’ policy adopted by the various governments and the regulatory bodies…
Download full paperFile format: .doc, available for editing
HIDE THIS PAPERGRAB THE BEST PAPER98.7% of users find it useful 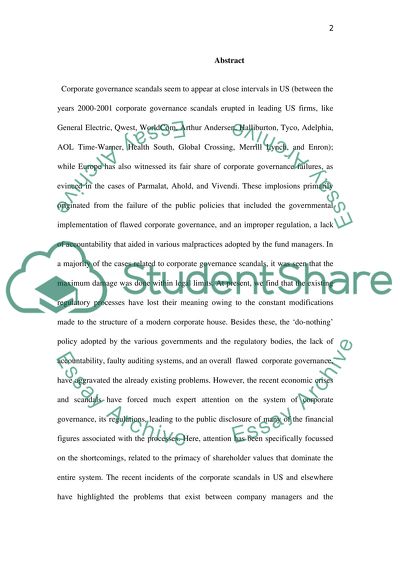 Download file to see previous pages This essau declares that the recent economic crises and scandals have forced much expert attention on the system of corporate governance, its regulations, leading to the public disclosure of many of the financial figures associated with the processes. Here, attention has been specifically focussed on the shortcomings, related to the primacy of shareholder values that dominate the entire system.
This paper makes a conclusion that the shareholders in most of the cases did not have a major role in creating the major financial crises of the 2000-2001 that had resulted in the economic breakdown of many of the large financial corporations. Despite some line of thinking that did not put the shareholders entirely above the line of guilt, it is more or less certain, that in majority of the cases the shareholders are mere bystanders, and do not have the power or the status to handle or interfere in the corporate governance, though it is certain that their investments are considered as playing a dominant role. Thus, it is evident that in this peculiar nature of the corporate shareholding system, where the shareholders have no rights on the nature of the investments made, yet their financial capital interests are given primary importance, do not have much of role in the problems faced in the line of the modern corporate governance. The problems within the corporate governance emerge more from the lack of effective regulatory and monitoring systems, that should focus more on the activities of the assets managers and investors, and the nature of the investments that are being made. ...Download file to see next pagesRead More
Share:
Tags
Cite this document
(“The Problems Surrounding Corporate Governance Are Rooted In the Essay”, n.d.)
Retrieved from https://studentshare.org/miscellaneous/1409729-the-problems-surrounding-corporate-governance-are-rooted-in-the-peculiar-nature-of-corporate-shareholding

They are on trial and will be dealt with fairly. These laws ensure that no one, even if he or she has committed a crime is abused or punished cruelly.
Following the history of civilization like in china, we see the traces of systems for Criminal justice in order to provide safety for the citizens. Evolving through the years laws have been modified and changed to form the system that we know today.
From its start, the “U.S. criminal justice system” has advocated the idea of “checks and balances”. To avoid dictatorial rule, the people who founded this system in such a way that one person was not given control or authority completely to punish the criminals. The idea of assigning a ‘jury...
6 Pages(1500 words)Assignment
sponsored ads
Save Your Time for More Important Things
Let us write or edit the essay on your topic "The Problems Surrounding Corporate Governance Are Rooted In the Peculiar Nature of Corporate Shareholding" with a personal 20% discount.
GRAB THE BEST PAPER

Let us find you another Essay on topic The Problems Surrounding Corporate Governance Are Rooted In the Peculiar Nature of Corporate Shareholding for FREE!