Comments (0)
Add to wishlistDelete from wishlist
Cite this document
Summary
If an offer is not accepted within a reasonable time, it is terminated. The acceptance of such offer after the lapse of a reasonable time would not be a valid acceptance. The offeror reserves a right to revoke his offer at any time before it is accepted unless the offeror has…
Download full paperFile format: .doc, available for editing
HIDE THIS PAPERGRAB THE BEST PAPER93.8% of users find it useful 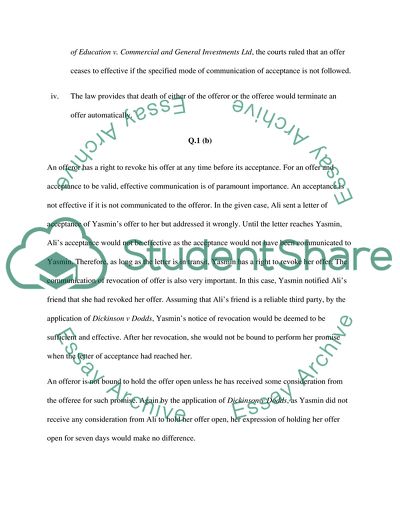 Download file to see previous pages However, if the offeree asks for further details about the offer, the offer is not rejected and is still effective as seen in Stevenson v McLean. If the offeror makes the offer again, then the offeree can accept it. An offer also ceases to be effective when the offeree makes a counter offer to the original offeror. In Hyde v Wrench, it was held that a counter offer rejects the original offer. The offeror is not bound to accept a counter offer. However, if he accepts the counter offer, a fresh agreement is formed without any regard to the original offer.
iii. Failure to fulfill a condition precedent to acceptance also terminates an offer. If the offeror has specified a definite mode of communication of acceptance which is not followed by the offeree, the offer ceases to be effective. In Manchester Diocesan Council of Education v. Commercial and General Investments Ltd, the courts ruled that an offer ceases to effective if the specified mode of communication of acceptance is not followed.
An offeror has a right to revoke his offer at any time before its acceptance. For an offer and acceptance to be valid, effective communication is of paramount importance. An acceptance is not effective if it is not communicated to the offeror. In the given case, Ali sent a letter of acceptance of Yasmin’s offer to her but addressed it wrongly. Until the letter reaches Yasmin, Ali’s acceptance would not be effective as the acceptance would not have been communicated to Yasmin. Therefore, as long as the letter is in transit, Yasmin has a right to revoke her offer. The communication of revocation of offer is also very important. In this case, Yasmin notified Ali’s friend that she had revoked her offer. Assuming that Ali’s friend is a reliable third party, by the application of Dickinson v Dodds, Yasmin’s notice of revocation would be deemed to be sufficient and effective. After her revocation, she would not be bound to perform her promise when the letter ...Download file to see next pagesRead More
Share:
Tags
Cite this document
(“Contract law examination Essay Example | Topics and Well Written Essays - 1500 words - 1”, n.d.)
Contract law examination Essay Example | Topics and Well Written Essays - 1500 words - 1. Retrieved from https://studentshare.org/miscellaneous/1405674-contract-law-examination

In th...
8 Pages(2000 words)Case Study
sponsored ads
Save Your Time for More Important Things
Let us write or edit the essay on your topic "Contract law examination" with a personal 20% discount.
GRAB THE BEST PAPER

Let us find you another Essay on topic Contract law examination for FREE!