Comments (0)
Add to wishlistDelete from wishlist
Cite this document
Summary
The paper “The UN Suspends Syria Mission, Citing Increase in Violence» elucidates the view on the ambiguity of the superpower mission in Libya. Part of the world community believes the US must fulfill its humanitarian obligations by intervening in the settlement of the armed civil conflict…
Download full paperFile format: .doc, available for editing
HIDE THIS PAPERGRAB THE BEST PAPER96.2% of users find it useful 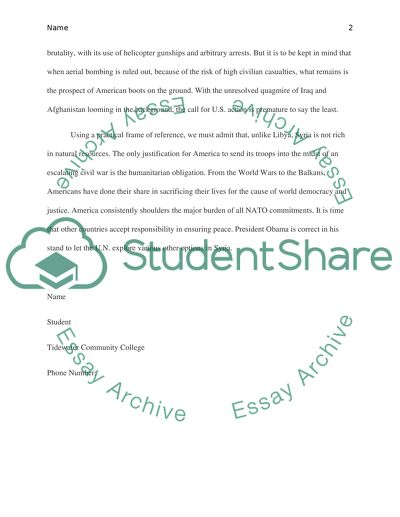 Letter to the Editor. Letters to the Editor The New York Times 620 Eighth Avenue New York, NY 10018 E-mail: letters@nytimes.com
U.N. Suspends Syria Mission, Citing Increase in Violence. June 16, 2012
The U.N.’s suspension of its mission in Syria is an unequivocal admission of its helplessness in the face of the rapidly deteriorating situation. In any case, the presence of the U.N. monitors accomplishes nothing, and opposition activists are justified in terming the mission a “sham.” With Russia and China adamant in their backing of the Assad regime, and Kofi Annan’s absolutely ineffective ‘Peace Plan,’ it is evident that the conflict is set to escalate. This is seen by many as a signal for the USA (of course, under the aegis of NATO), to step into the breach.
The growing clamor for U. S. intervention cites the massacre of unarmed civilians, including women and children. The Assad regime is sinking to new levels of authoritarian brutality, with its use of helicopter gunships and arbitrary arrests. But it is to be kept in mind that when aerial bombing is ruled out, because of the risk of high civilian casualties, what remains is the prospect of American boots on the ground. With the unresolved quagmire of Iraq and Afghanistan looming in the background, the call for U.S. action is premature to say the least.
Using a practical frame of reference, we must admit that, unlike Libya, Syria is not rich in natural resources. The only justification for America to send its troops into the midst of an escalating civil war is the humanitarian obligation. From the World Wars to the Balkans, Americans have done their share in sacrificing their lives for the cause of world democracy and justice. America consistently shoulders the major burden of all NATO commitments. It is time that other countries accept responsibility in ensuring peace. President Obama is correct in his stand to let the U.N. explore various other options in Syria.
Name
Student
Tidewater Community College
Phone Number:
Works Cited.
Kirkpatrick, David D. and David E. Sanger. “U.N. Suspends Syria Mission, Citing Increase in
Violence.” The New York Times. June 16, 2012. Web. 21 June, 2012.
http://www.nytimes.com/2012/06/17/world/middleeast/un-suspends-its-mission-in-syria-citing-violence.html?pagewanted=all Read More
Share:
Tags
Cite this document
(The UN Suspends Syria Mission, Citing Increase in Violence Speech or Presentation, n.d.)
The UN Suspends Syria Mission, Citing Increase in Violence Speech or Presentation. Retrieved from https://studentshare.org/military/1599071-an-essay-about-one-of-the-subject-listed-please-read

CHECK THESE SAMPLES OF The UN Suspends Syria Mission, Citing Increase in Violence

...is still maintains his loyalty to his military officers and maintains support reserves that enable his regime to survive the protest. The alleged possession of biological weapons and chemical arsenal by the nation completely complicates that situation. Works cited Hinnebusch, Raymond A. Syria: Revolution from Above. London: Routledge, 2002. Internet resource. Phares, Walid. The Coming Revolution: Struggle for Freedom in the Middle East. New York: Threshold Editions, 2010. Print. Pierret, Thomas. Religion and State in Syria: The Sunni Ulama from Coup to Revolution. Cambridge: Cambridge University Press, 2013. Print. Syria After Two Years of the March Revolution. N.p,...
3 Pages(750 words)Research Paper

...changed the social and political structure of Syria. However, unlike the practical main revolution that causes increased violence and destruction from below, the Syrian revolution was started from above courtesy of reform coup and this paved way for the long Baath’s party military reign that made people feel greatly isolated under the leadership of Assad. Assad played a main role in the leadership of the revolution from above that caused land reforms, education expansion and extension industrialization sponsored by state that favored the elite group of the society. Tom achieve increased power in the Arabic world and secure his power from the West, Assad waged war on...
3 Pages(750 words)Essay

...countries more so the ones relying on their produce for example, oil. Syria nearing the Golf and the Suez Canal can hider trade all over the world as many goods pass through the areas by the sea to other countries. This instability will trigger negative growth to those countries relying from Syria’s oil, as oil plays a major part in the economy of a country. Peace being supreme in any sovereign country needs to be maintained and respected and this is made possible by respecting the dignity of the peoples regardless of their race, tribe and religion. Work Cited Sparr Stephen. Revolt in Syria: Eye-witness to the Uprising. London: Hurst Publishers, 2012, Print BBC....
5 Pages(1250 words)Research Paper

...representing a “loss of economic freedom” (Foner, 877). Fast foods and frozen TV dinners transformed eating habits, while the interstate highway system and cars revolutionized travel. From the political, civil rights, economic and cultural perspectives, America of the 1950’s differed substantially from the place it was in the previous decade: A new generation of Americans emerged from the post-war US. Fear of nuclear war, anti-communist sentiment, the increasing call for racial equality, and a prevalent consumer culture made the ‘Fabulous Fifties’ unique in its character. Works Cited. Foner, Eric. “An Affluent Society.” Chapter 24. Give Me Liberty! An American History. 2nd Seagull Edition. W.W....
2 Pages(500 words)Essay

...There are many advantages of the face-to-face learning system and some of these are dependent on the accessibility if the as well as the consistency if classes. Face-to-face leaning not only has the advantage of enabling students to develop a culture of teamwork, but it also enables them to actively participate in the lecture. Professors are able to directly influence their students by teaching them the ideas which are propagated by their various schools of thought. It is for these reasons that the following statement comes true: Students who prefer the traditional format (face-to-face) do so for several reasons, but they most commonly cite a preference for the instructor presence and the learning advantage of...
2 Pages(500 words)Outline

...to failure to garner at least nine of the fifteen council votes in the affirmative, or failure to obtain at least one of the permanent member votes. In this case, the General Assembly considers the report of the Security Council and may then decide to return the application to the Security Council for further consideration. The Assembly also sends a full record of the discussion undertaken by the members regarding the arguments for and against membership. On 14 July 2011, the newest country in the world, South Sudan, became the 193rd member of the United Nations after successfully completing this application process (UN News Center, www.un.org). Works CitedUN News Center. Process...
2 Pages(500 words)Research Paper

...towards these goals which includes recognizing new events that are directly influencing the progress, major challenges and different policy interventions that are desperately needed before 2015. The job is getting tougher everyday due to increasing tension. According to a report by The Washington Times dozens of highly trained and dangerous fighters are reaching Syria from Pakistan (Schmitt, 2014). It is assumed that they are strengthening their terror network in the region. As long as such threats remain in the country, there is little that UNDP groups and other NGOs can do to reach the 2015 MDGs. Recommendations The recent reports from United Nations development program on Syria show...
8 Pages(2000 words)Essay

... of Language Teaching and Research 4.4 (2013): 858-68. Print. The article presents a summary of the paper by pointing out that Syria’s MDG has been significantly affected by the crisis. Shojaei, Kazemand & Hossein point out that the UN has cited Syria as the worst affected country by internal violence in the modern day (863). The UN is also keen to note that the country has become less humanity friendly as refugees from Syria are on the increase in Lebanon and Jordan. UNDP."Responding to the Crisis in Syria." Responding to Crisis in Syria.N.p., n.d. Web. 26 Mar. 2014. . To further examine the impact of the crisis in Syria... . The Washington Post, 24 Mar. 2014. Web. 26 Mar. 2014....
2 Pages(500 words)Annotated Bibliography

Political Violence in Syria And Iraq

...had profound impact that was majorly negative. For example, the UNSC and the West responded with strategies that failed to address political problems in Syria, thereby resulting in the militarization of the revolution. In Iraq, the US-led military intervention led to massacres, negative political incitement and the disbandment of the armed forces. The major causes of the sectarian and ethnic tension in Iraq were struggle for power and religious tension. In both countries, political violence resulted in death and human suffering, economic depression and ethnic divisions that increased mistrust. References Carothers, Thomas. 2003. "Promoting democracy and fighting terror."...
8 Pages(2000 words)Essay

...The U.N Humanitarian Intervention in Syria The humanitarian crisis in Syria is attributed to the crackdown on the Syrian people by the Syrian government. It is evident that approximately 220, 000 lives have been lost and 9 million Syrians displaced since the crisis began in 2011 (United Nations News Center 1). Several international actors have increased their involvement in the pursuit of a peaceful lasting solution in Syria with the United Nations being the key actor. Role of the UN Security Council One of key functions of the United Nations is the creation of International Laws and norms. It also plays a supervisory role in ensuring adherence to such...
4 Pages(1000 words)Case Study
sponsored ads
Save Your Time for More Important Things
Let us write or edit the speech or presentation on your topic "The UN Suspends Syria Mission, Citing Increase in Violence" with a personal 20% discount.
GRAB THE BEST PAPER

Let us find you another Speech or Presentation on topic The UN Suspends Syria Mission, Citing Increase in Violence for FREE!