Comments (0)
Add to wishlistDelete from wishlist
Cite this document
Summary
The paper “Military Intervention in Turkish Politics” looks at different courses of Turkey's political development from a single-party rule of the Republican People’s Party (RPP) to a multiparty system in which elections were openly contested and voters willingly involved…
Download full paperFile format: .doc, available for editing
HIDE THIS PAPERGRAB THE BEST PAPER99% of users find it useful 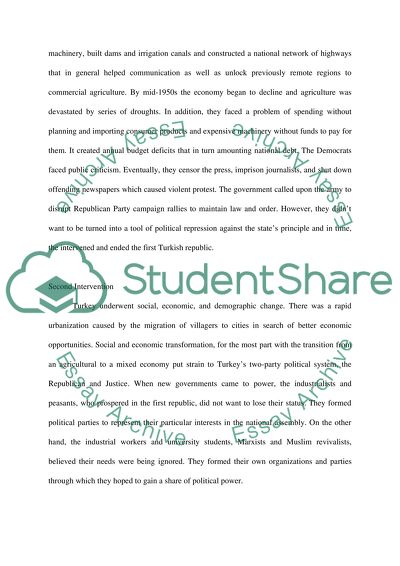 Download file to see previous pages Intellectuals and politicians also voiced out sentiments against the monopolization of political power by a single party. In response to these issues, the president permitted greater freedom for the expression of political opposition. Some members of the RPP took advantage of this and formed the new organization, the Democratic Party.
For the next four years, the Democrats frequently challenged government policy and were able to attract support by proficiently utilizing the growing popular hostility with the interference of the state in peoples' lives. The state eventually underwent a peaceful transition to a multiparty. The government had undertaken agricultural reforms and to improve the standard of living of the peasants. They brought in huge quantities of expensive agricultural machinery, built dams and irrigation canals and constructed a national network of highways that in general helped communication as well as unlock previously remote regions to commercial agriculture. By the mid-1950s the economy began to decline and agriculture was devastated by a series of droughts. In addition, they faced a problem of spending without planning and importing consumer products and expensive machinery without funds to pay for them. It created annual budget deficits that in turn amounting national debt. The Democrats faced public criticism. Eventually, they censor the press, imprisoned journalists, and shut down offending newspapers which caused violent protests. The government called upon the army to disrupt Republican Party campaign rallies to maintain law and order. However, they didn't want to be turned into a tool of political repression against the state's principle and in time, the intervened and ended the first Turkish republic.

CHECK THESE SAMPLES OF Military Intervention in Turkish Politics

Though theoretically, the term international relations are the product of the eighteenth century, when renowned English philosopher and jurist Jeremy Bentham applied it in his works, yet in practice, it is as old as the history of the human state system itself. It is fact beyond doubt that the interaction among individuals belonging to other states has been in vogue since ever and the people had been tied up in social, economic, cultural and political ties outside their country. Looking into the history of the world at large, it becomes evident that the relations between the states existed in ancient Greek, Roman, Chinese, Egyptian and Indian civilizations too, though specific laws had not been introduced by any of these countries...
15 Pages(3750 words)Assignment

Autism is under the Perv...
7 Pages(1750 words)Coursework
sponsored ads
Save Your Time for More Important Things
Let us write or edit the assignment on your topic "Military Intervention in Turkish Politics" with a personal 20% discount.
GRAB THE BEST PAPER

Let us find you another Assignment on topic Military Intervention in Turkish Politics for FREE!