Comments (0)
Add to wishlistDelete from wishlist
Cite this document
Summary
Anaerobic Ammonium Oxidation, also referred to as ANAMMOX is a new and revolutionary nitrogen cycle whereby NH4+ oxidation is coupled to the reduction of NO2- to produce N2. The very first discovery of ANAMMOX happened in a wastewater treatment plant back in the year 1995…
Download full paperFile format: .doc, available for editing
HIDE THIS PAPERGRAB THE BEST PAPER91.3% of users find it useful 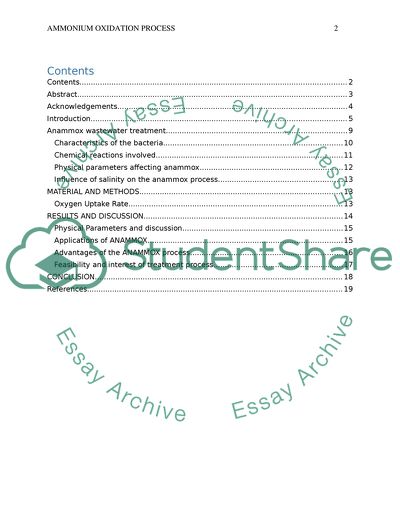 Download file to see previous pages Generally, this bacterial can be found almost everywhere. Findings have shown that the contribution of this bacterium on the removal of nitrogen in the environment can be immense. The process, said to be chemolithrophic, is a very new loop in the biogeochemical nitrogen cycle hitherto unknown to engineering (Dong & Sun, 2007). While there is very little, that is known about the ecology, genetics, or even the physiology of the bacteria, this research project will be very important in shedding some light on the community structure of the Anaerobic Ammonium Oxidation bacterial and all their involvement in environmental parameters that include nitrate, ammonium, and the salinity levels. This project discusses the effects of pH and salinity on the anammox process with results showing that the salinity is among the few factors that are really affecting the effectiveness of the whole process.
My thanks go to Mr. XXXX through whose guidance I have learned molecular techniques used for the investigation of bacteria. It is due to his patient and undying support that pushed this study through. A good and encouraging attitude and his excitement about this work encouraged me to explore deeper into learning as much as possible in the process. I wish to also thank Ms. YYYY who also made this research a success through teaching me about the most fundamental and traditional microbiology techniques. Mr. QQQQ introduced the isotope ratio mass spectrometer to me. He was also very encouraging and it was through his words of wisdom that the concept behind stable isotope geochemistry became one that I can handle well, and with ease.
This research owes its completion to WWWW who collected the sediment samples from XXX Estuary. All the other members of the microbiology laboratory were very helpful throughout my visits to the lab. It was their long, well-informed discussions that made the research a success, and I will forever cherish such ...Download file to see next pagesRead More
Share:
Tags
Cite this document
(“Nitrogen removal from wastewater using anaerobic ammonium oxidation Term Paper”, n.d.)
Retrieved from https://studentshare.org/medical-science/1673464-nitrogen-removal-from-wastewater-using-anaerobic-ammonium-oxidation-anammox-process

...?Wastewater Management Secondary treatment involves the unique biological systems that are designed to remove suspended and dissolved solids through conversions that are biological to transform them into settleable form. Tertiary treatment is basically the polishing process that normally filters the treated water through passage of fine sand to remove the finely suspended solids. Despite the effectiveness of the two treatment methods, there are some key challenges that are face the treatment methods. For example, many of the water treatment methods and collection facilities are now worn out hence require further improvement, replacement or repair in efforts to maintain their standards (Bartram & Lentron, 2005). Considering the sewer...
2 Pages(500 words)Essay

... treatment process; 2) a discussion of the appropriate uses of reclaimed water; and 3) an explanation as to whether a recommendation should be made for secondary or tertiary treatment for groundwater recharge, if the water were to indeed end up being used for drinking—with rationale. II. Comparison-Contrast of Secondary to Tertiary Wastewater Treatment Secondary treatment of wastewater is considered the next logical step after primary treatment, which basically reduces or eliminates certain substances from the water that are hurtful. According to the Water Environment Federation (2007), “Secondary treatment reduces the concentrations of dissolved and colloidal organic substances and suspended matter in wastewater” (pp. 2-11). Tertiary...
2 Pages(500 words)Essay

Leading in the Go Green, campaign is biogas. Biogas is defined as a mixture of carbon dioxide and methane gas, which is sourced from the breakdown of organic matter, usually waste, in a process referred to as anaerobic digestion. The process is a method by which raw biogas is converted into cleaner, efficient and easier used energy sources. Planning a biogas plant Designing a biogas plant is an engineering problem that has to be approached by considering all the operational, economic, environmental and sustainability conditions. Before designing the biogas plant in the Middle East, the engineer has to first engage in plans, which are conceptualized ideas, but not suited for any one given application. In planning, some of the cons...
8 Pages(2000 words)Essay

With the increase in population, the demand for water has increased drastically over the years. As a matter of fact, besides the water that is locked in the glaciers and icecaps, about 97 % of the fresh water is in the lakes, rivers, streams, and groundwater. The pollution of these water resources is a serious concern all over the world. As the number of industries is increasing, growing volumes of industrial wastewater are being discharged to surface waters. Due to the lack of funds and proper initiatives, the treatment provided is usually poor to protect the desired uses of the receiving waters.
Before getting into the principal steps involved in industrial wastewater treatment, it is important to understand that reducing the...
6 Pages(1500 words)Essay

The reaction between these two chemical moieties is a typical Redox reaction in which electron exchange takes place as depicted below:
9.8 grams of Ferrous Ammonium sulphate was carefully weighed and transferred to a volumetric flask. 150 milliliters of Sulphuric Acid was added to prevent hydrolysis and the mixture was stirred until the solid dissolved completely. The volume was made up to the mark with de-ionized water. 25 milliliters of the solution was removed from the flask with a pipette and titrated with the KMno4 solution until the first appearance of permanent pink colour. At the endpoint all of the Fe2+ has been used up (reacted) and the purple permanganate is no longer converted to colourless Mn+2 so the pink colour...
3 Pages(750 words)Lab Report

Chemistry of Hazardous Chemicals Which of the indicators would NOT communicate to a first on-the-scene responder of the presence of a simple oxidizer?
The number 6.1 as a component of a basic description of a hazardous material listed on a shipping paper
2. What product is sometimes selected instead of chlorine to bleach paper pulp and produce white wheat flour?
Chlorine dioxide
3. What is the principal risk associated with exposure to chlorine dioxide?
It can cause inhalation toxicity
4. Clorox is an aqueous solution containing what percentage of sodium hypochlorite?
6%
5. Which of the following statements regarding oxidation numbers is FALSE?
The oxidation number of each atom in an element is...
2 Pages(500 words)Essay

Further bacterial action converts the ammonia into nitrite and nitrate by nitrification. Plants utilize nitrate for metabolic purposes. The cycle ends with denitrification where microbes convert back the nitrates into nitrogen gas and release it back into the air.
The nitrogen cycle of the aquatic or marine ecosystem is considered to be extremely complex. In the marine ecosystem, nitrogen is present in more than one form and all chemical conversions are done by marine organisms. Nitrogen may be found as nitrogen dioxide, nitrate, nitrite, ammonia, and nitrous oxide. However, the most abundant forms of Nitrogen in the ocean surface are dissolved dinitrogen gas and dissolved organic nitrogen (Zehr and Kudela, 2011, p197).
...

10 Pages(2500 words)Assignment
sponsored ads
Save Your Time for More Important Things
Let us write or edit the term paper on your topic "Nitrogen removal from wastewater using anaerobic ammonium oxidation (Anammox) process" with a personal 20% discount.
GRAB THE BEST PAPER