Comments (0)
Add to wishlistDelete from wishlist
Cite this document
Summary
The writer of this application essay aims to present his future plans after graduation from the School of Pharmacy at Ohio State University. His most cherished dream is to carry on the research in the field of oncology in order to find a cure for cancer…
Download full paperFile format: .doc, available for editing
HIDE THIS PAPERGRAB THE BEST PAPER94.4% of users find it useful 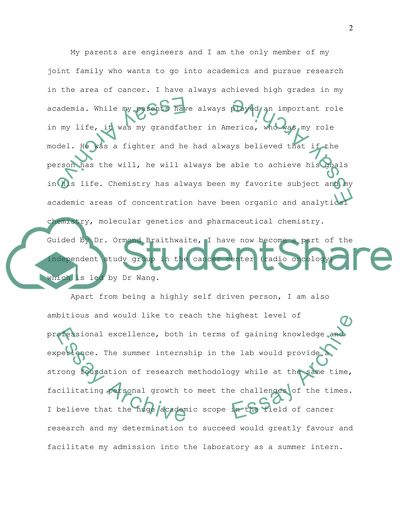 I have done my graduation from Pharmaceutical science, School of Pharmacy, Ohio My most cherished dream is to carry on the researchin the field of oncology in order to find a cure for cancer. I would like to get my doctoral thesis on cancer research. Recognizing my passionate interest in the study of cancer, Dr. Ormond Braithwaite, my Organic Chemistry Instructor and mentor has greatly helped me to learn the fundamentals of the organic chemistry and understand the need for further research in the area that would help develop drugs to fight cancer, the most dreaded disease. Phar/biochemical laboratory is one of the best laboratories of the world and a summer internship in the lab would give the essential exposure towards invaluable research practice and learning process.
My academic excellence, till date, can be contributed to the encouragement and support of my grandfather who had always inspired me to fight against the injustices of the nature and overcome adversities of life with positive attitude and confidence on my own abilities. Grandfather died of hepatic cancer and his death has changed the course of my life. He died of a disease which had no cure and I would like to conduct research in the field so that some effective formula for generic drug could be developed that would effectively fight cancerous cells and cure cancer patients.
My parents are engineers and I am the only member of my joint family who wants to go into academics and pursue research in the area of cancer. I have always achieved high grades in my academia. While my parents have always played an important role in my life, it was my grandfather in America, who was my role model. He was a fighter and he had always believed that if the person has the will, he will always be able to achieve his goals in his life. Chemistry has always been my favorite subject and my academic areas of concentration have been organic and analytical chemistry, molecular genetics and pharmaceutical chemistry. Guided by Dr. Ormond Braithwaite, I have now become a part of the independent study group in the cancer center (radio oncology) which is led by Dr Wang.
Apart from being a highly self driven person, I am also ambitious and would like to reach the highest level of professional excellence, both in terms of gaining knowledge and experience. The summer internship in the lab would provide a strong foundation of research methodology while at the same time, facilitating personal growth to meet the challenges of the times. I believe that the huge academic scope in the field of cancer research and my determination to succeed would greatly favour and facilitate my admission into the laboratory as a summer intern. The internship in the renowned lab would significantly augment my academic experience and add value to my research techniques. Read More
Share:
Tags
Cite this document
(Graduation from School of Pharmacy in Ohio State University Admission/Application Essay, n.d.)
Graduation from School of Pharmacy in Ohio State University Admission/Application Essay. Retrieved from https://studentshare.org/medical-science/1551379-admisssion-essayresume

“Graduation from School of Pharmacy in Ohio State University Admission/Application Essay”, n.d. https://studentshare.org/medical-science/1551379-admisssion-essayresume.
Comments (0)
Click to create a comment or rate a document

The free market concept is mainly a theoretical concept as every country, even capitalist ones place some restrictions on the ownership and exchange of commodities (Free market economy). Therefore, the term free-market economy primarily means a system where the buyers and sellers are solely responsible for the choices they make. It gives the buyers and sellers the power to do business without being afraid of any regulations and intervention by the state. Hence, a free market gives the absolute power to prices to determine the allocation and distribution of goods and services (Free Market Economy). The pricing mechanism is in turn, driven by the forces of demand and supply of goods and services. Demand and supply of...
9 Pages(2250 words)Case Study
sponsored ads
Save Your Time for More Important Things
Let us write or edit the admission/application essay on your topic "Graduation from School of Pharmacy in Ohio State University" with a personal 20% discount.
GRAB THE BEST PAPER

Let us find you another Admission/Application Essay on topic Graduation from School of Pharmacy in Ohio State University for FREE!