Comments (0)
Add to wishlistDelete from wishlist
Cite this document
Summary
This paper "Journalism and the Worsening Case of Privacy Invasion - A Call for Responsible Journalism" focuses on the fact that journalists spend most of their time searching for information that they can use as a material for their responsibility of providing news to the people…
Download full paperFile format: .doc, available for editing
HIDE THIS PAPERGRAB THE BEST PAPER94.5% of users find it useful 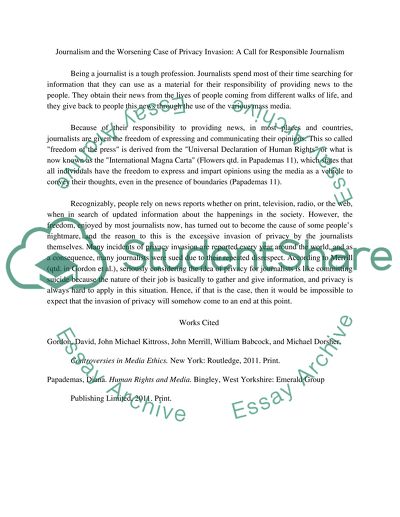 "Freedom of the press" is derived from the "Universal Declaration of Human Rights" or what is now known as the "International Magna Carta" (Flowers qt. in Papademas 11), which states that all individuals have the freedom to express and impart opinions using the media as a vehicle to convey their thoughts, even in the presence of boundaries (Papademas 11).
Recognizably, people rely on news reports whether on print, television, radio, or the web, when in search of updated information about the happenings in the society. However, the freedom, enjoyed by most journalists now, has turned out to become the cause of some people’s nightmare, and the reason to this is the excessive invasion of privacy by the journalists themselves. Many incidents of privacy invasion are reported every year around the world, and as a consequence, many journalists were sued due to their repeated disrespect. According to Merrill (qt. in Gordon et al.), seriously considering the idea of privacy for journalists is like committing suicide because the nature of their job is basically to gather and give information, and privacy is always hard to apply in this situation. Hence, if that is the case, then it would be impossible to expect that the invasion of privacy will somehow come to an end at this point.
Read More
Share:
Tags
Cite this document
(Journalism and the Worsening Case of Privacy Invasion - A Call for Res Essay, n.d.)
Journalism and the Worsening Case of Privacy Invasion - A Call for Res Essay. Retrieved from https://studentshare.org/media/1599315-news-media

The PCI DSS was created primarily created by Master card and Visa but later on, we're joined by three other premium credit card companies to form an independent council to counter online credit card fraud. The American Express, discover financial services and JCB were the three other companies that decided to take an active part in the stand taken by Visa and MasterCard. To understand the effectiveness of PCI DSS it becomes crucial to understand its core functionality and the reasons it was devised. The objective of PCI DSS is to build a secure network, protect cardholder data, maintain a vulnerability management program and implement strong access control measures (Wright .2008.Page11). In today’s time when security has bec...
6 Pages(1500 words)Assignment

Accordingly, corporate social responsibility would mean ensuring that the companies conduct their business responsibly; while taking a clear stand on the social issues relating to its operations, including the supply chain network. Hence, awareness is required within the company structure, where the need for social and environmental performance is valued, apart from the traditional financial performance. Therefore, certain key factors that concern the socially responsible procurement program should be considered by all organizations, to safeguard the larger interests of humankind and the environment. (Socially Responsible Procurement, page 1-2)

In the present business environment, where corporate governance must volunta...
8 Pages(2000 words)Coursework

Justine could either claim under “like work,” “work rated as equivalent,” or “work of equal value.” A claim under the “like work” provision of the Equal Pay Act 1970 is laid down in s 1(2...
9 Pages(2250 words)Case Study
sponsored ads
Save Your Time for More Important Things
Let us write or edit the essay on your topic "Journalism and the Worsening Case of Privacy Invasion - A Call for Responsible Journalism" with a personal 20% discount.
GRAB THE BEST PAPER

Let us find you another Essay on topic Journalism and the Worsening Case of Privacy Invasion - A Call for Responsible Journalism for FREE!