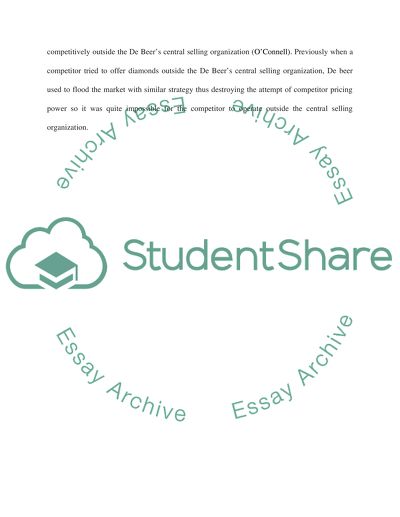 De Beers recommended strategy De Beer is a privately owned family of companies which is engaged in diamond exploration, mining, trading, and marketing of diamonds (De Beers). The company possess leading market share worldwide in the diamond industry (Bain and Company).
Strategy recommended # 1
“The company can expand its business in new available markets in UAE, Europe and, Australia to expand customer base with a support of company’s strong supply chain and brand equity”
Strategy recommended # 2
“The company can acquire small and medium-sized trading and marketing firms in the emerging markets in attempt to increase market share and to minimize the competition”
Strategy recommended # 3
“De Beer can adopt new technology that is able to create synthetic diamonds which are different from diamonds created from natural resources in the attempt to bring in innovations and growth.”
Best Selected Strategy
The most important strategy De Beers should undertake first is strategy # 3 as the company’s business model to control and manage the amount of inventory to be sent in the market is no longer effective and the company needs to adopt new ways to regain its hold on the described business model and to stay competitive; now other diamond companies are able to sell diamonds competitively outside the De Beer’s central selling organization (O’Connell). Previously when a competitor tried to offer diamonds outside the De Beer’s central selling organization, De beer used to flood the market with similar strategy thus destroying the attempt of competitor pricing power so it was quite impossible for the competitor to operate outside the central selling organization.
Works Cited
Bain and Company. The Global Diamond Industry. 2011. 11 Jun. 2012 http://www.bain.com/Images/PR_BAIN_REPORT_The_global_diamond_industry.pdf
De Beers. About De Beers. 2011. 11 Jun. 2012 http://www.debeers.com/about-de-beers
O’Connell, Patricia. ‘The issue: De Beers’ multifaceted strategy shift.’ Bloomberg Businessweek. Jan. 2009. 11 Jun. 2012. http://www.businessweek.com/managing/content/jan2009/ca2009016_644338.htm Read More
Share:
Tags
Cite this document
(“De Beers' recommended strategy Case Study Example | Topics and Well Written Essays - 250 words”, n.d.)
De Beers' recommended strategy Case Study Example | Topics and Well Written Essays - 250 words. Retrieved from https://studentshare.org/marketing/1598457-de-beers-recommended-strategy

... affected the diamond mining rate of the company and buying rate of customers, both in Africa and several other parts of the world. Moreover in the same period, several diamond mines was also found in Canada and that also divided the total market share of the company. A huge sales drop of 85% to 45% was experienced by the company due to all these events and that urge owners and executives of the company to think wisely so to bring back the royalty and fame of the company (VOA, 2007). Overview of the Campaign It was necessary for De Beers to think of a new strategy for selling its diamonds as the current selling strategy was not proving to be effective enough. This was the time when Harry Oppenheimer, one of the board members of the company...
9 Pages(2250 words)Essay

... a only a single company exists to dominate a certain industry in the provision of goods or services (Milton 2002). Its high price today and its perception of being a valued commodity can be attributed to De Beers’ strategy to justify the increase of the price of diamonds because diamonds perse have no practical use and its high price does not reflect its scarcity because its price remains high even if it is in abundance (Yu nd). III. Forms of distribution of De Beers: CSO and DTC De Beers is probably the most successful and biggest monopoly company in the world that virtually operated in almost absolute cartel from its beginning in 1800s until 2001. It was able to establish its cartel like monopoly in the diamond industry when Ernest...
5 Pages(1250 words)Essay

...Forever: De Beers and US Anti Trust Law Introduction Diamond market is dominated by De Beers world over for more than one hundred years since its inception in 1880. The diamond trade has been managed by a 'cartel' since these days headed by De Beers mining company. Once the availability of diamond mines shrunk to Africa and a few in Brazil, the diamond mines in Africa controlled the availability of the diamonds in the market and their price. De Beers slowly and steadily ensured that all the diamond mines in Africa, specifically; South Africa was in their control or was working in line with their decrees. Most of the mines in South Africa were bought out by De Beers and the others started working closely with them in order to fix the price...
4 Pages(1000 words)Case Study

...RECOMMENDED STRATEGY FOR DELTA AIRLINE Just as is the case with all other businesses, the Delta airline has had strategic driving force and its operations have been safety and reliability for air transport, great service to customers as well as hospitality as a virtue. The vision under which the company operates is meeting the expectations of customers while always endeavoring to reach greater heights in excellence. This paper therefore is focused on provision of a comprehensive analysis of the company’s operation strategies and recommendations for its effectiveness in industrial performance. VI. STRATEGIC ALTERNATIVES AND RECOMMENDED STRATEGY A. Strategic Alternatives The current and revised objectives of the organization is to provide...
8 Pages(2000 words)Essay

...Running head: social performance of organizations 11th April Introduction De Beers Diamond Company, whose headquarters are in Luxembourg City, is well known for the mining of diamond, operating of diamond shops, trading as well as manufacturing of various diamond products. Having being founded by Cecil Rhodes through the support of Alfred Beit, a Southern African businessman and N M Rothschild & Sons, a London based bank, De Beers is well known for its manipulation of the diamond market including prices and demand especially in the 20th Century. For instance, at one time, the company controlled the diamond market by convincing other producers to join it. However, some of the producers refused making the De Beer to flood the market...
6 Pages(1500 words)Case Study

Controversy over Diamonds Made Into Virtue by De Beers

Key factors in the organizational external environment are the growing resistance of its diamond producers from several diamond producing countries such as Russia, Canada and Australia who have also a large stockpile of diamond on its monopoly strategy, to cooperate with the single-channel system and flat prices of the item. (Goldschein, Eric, 2011).
These problems led De Beers to change its company strategy from being a rough-diamond supplier and holding a monopoly of the diamond industry to promoting its own brand of diamonds and retail stores. Da Beers present predicament is the high stockpile of diamonds that it has kept in order to watch supply, demand, and prices. Stockpiling has been proven to be costly to the company....
7 Pages(1750 words)Assignment

This positioning is symbolic, of growing love as the years pass being equated with growing size of diamonds. It intrigues one as diamonds are now shown to relate with the journey of life, and not merely as a one time gift of love. The message is different, and it tickles the mind with the new concept –  of diamonds being constant companions of the journey of love and adventures. In this manner, the campaign hopes to inculcate the benefits of having a journey series, as a symbol of growing love. The inherent need that is present in any couple, that of cherishing life together; getting old together in this journey of life; and having their love grows with time; is what the above campaign addresses.  The following par...
8 Pages(2000 words)Case Study

This works as an attention catcher for the audience as the dandelions presents no idea to the audience what the advertisement is actually about. The attention is also created by the rhyme that is played in the background sung by Dusty Springfield. The rhyme is very slow in tone, more of a slow jazz song which is very catchy in nature. Then the interest is created by dandelions moving from place to place with the words of the rhymes portraying a girl asking her lover some time of his life and to be with her forever that sketches meaning of De Beers’ slogan ‘A Diamond is forever’. They have used three pairs of living things spending moments together; a pair of dandelions, a pair of horses and a couple of men and wo...
6 Pages(1500 words)Essay
sponsored ads
Save Your Time for More Important Things
Let us write or edit the case study on your topic "De Beers' recommended strategy" with a personal 20% discount.
GRAB THE BEST PAPER

Let us find you another Case Study on topic De Beers' recommended strategy for FREE!