Comments (0)
Add to wishlistDelete from wishlist
Cite this document
Summary
The announcement of the first case of Ebola in Texas was an awakening call for the United States to acknowledge that the epidemic was not an African problem, but a global epidemic. The effecting of missionaries health worker ensured emergency airlift of the patient to United…
Download full paperFile format: .doc, available for editing
HIDE THIS PAPERGRAB THE BEST PAPER93.4% of users find it useful 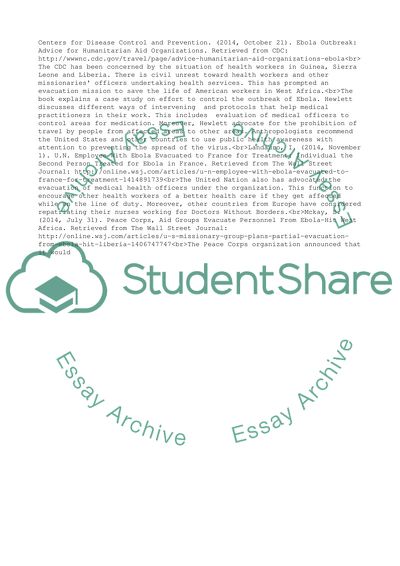 Download file to see previous pages Centers for Disease Control and Prevention. (2014, October 21). Ebola Outbreak: Advice for Humanitarian Aid Organizations. Retrieved from CDC: http://wwwnc.cdc.gov/travel/page/advice-humanitarian-aid-organizations-ebola
The CDC has been concerned by the situation of health workers in Guinea, Sierra Leone and Liberia. There is civil unrest toward health workers and other missionaries’ officers undertaking health services. This has prompted an evacuation mission to save the life of American workers in West Africa.
The book explains a case study on effort to control the outbreak of Ebola. Hewlett discusses different ways of intervening and protocols that help medical practitioners in their work. This includes evaluation of medical officers to control areas for medication. Moreover, Hewlett advocate for the prohibition of travel by people from affected areas to other areas. Anthropologists recommend the United States and other countries to use public health awareness with attention to preventing the spread of the virus.
Landauro, I. (2014, November 1). U.N. Employee With Ebola Evacuated to France for Treatment: Individual the Second Person Treated for Ebola in France. Retrieved from The Wall Street Journal: http://online.wsj.com/articles/u-n-employee-with-ebola-evacuated-to-france-for-treatment-1414891739
The United Nation also has advocated the evacuation of medical health officers under the organization. This function to encourage other health workers of a better health care if they get affected while on the line of duty. Moreover, other countries from Europe have considered repatriating their nurses working for Doctors Without Borders.
Mckay, B. (2014, July 31). Peace Corps, Aid Groups Evacuate Personnel From Ebola-Hit West Africa. Retrieved from The Wall Street Journal: http://online.wsj.com/articles/u-s-missionary-group-plans-partial-evacuation-from-ebola-hit-liberia-1406747747
The Peace Corps organization announced that it would ...Download file to see next pagesRead More
Share:
Tags
Cite this document
(“Annotated Bibliography: Issue - Relocation of International Religious Bibliography”, n.d.)
Retrieved de https://studentshare.org/management/1663710-annotated-bibliography-issue-relocation-of-international-religious-workers-away-from-affected-ebola-regions-in-west-africa

CHECK THESE SAMPLES OF Annotated Bibliography: Issue - Relocation of International Religious Workers Away from Affected EBOLA Regions in West Africa

...study verifies the potential of nurses to highly influence the success of HIV treatment programmes no matter the level of their expertise on this field. "Othering" the health worker: self-stigmatization of HIV/AIDS care among health workers in Swaziland De Vries, D., Galvin, S., Mhlanga, M., Cindzi, B. & Dlamini, T., 2011 Health care workers who are involved in HIV care are highly exposed to the particular disease. Still, if affected by HIV, these individuals are more likely to be stigmatized, compared to the rest of the population. This issue is explored in the study of De Vries et al. (2011). The particular study, which emphasizes on healthcare...
19 Pages(4750 words)Annotated Bibliography

...?Annotated Bibliography The Arrival of Bantu-Speaking Africans Byrnes, Rita M. (1996). The Arrival of Bantu-Speaking Africans. South Africa: A Country Study. Retrieved on Feb. 04, 2011 from http://countrystudies.us/south-africa/3.htm The article provides a brief background about how the Bantu-speaking Africans dominated the population of the present-day inhabitants of South Africa. Here, historians provided a brief backgrounder on Bantu-speaking Africans, who originated from West Central Africa. It featured some of its farming and cultural practices. Bantu group migration was described to move slowly southward seeking to explore new frontiers of lands and...
4 Pages(1000 words)Annotated Bibliography

...? Maxine V Kerr April 14, References Dolgopol, U. & Gardam, J.G. (2006). The Challenge of Conflict: International Law Responds. The Netherlands.Martinus Nijhoff Publishers. This book presents the challenges being faced by the International Court of Justice (ICJ), United Nations (UN) and Security Council, and their roles as peacekeepers by resolving issues which involve disputes among member States. This is in accord with the power of these judicial bodies to fully enforce the law and impose sanctions among the members States which do not comply faithfully comply with their obligations, such as those contained in the treaty stipulations and multilateral agreements. The modern armed...
4 Pages(1000 words)Annotated Bibliography

...responsibility in recent times due to limited staff resources and diminishing quality of care. Nursing administrators can implement any quality improvement policies or standards than any other health care worker as they are primary care takers of patient. This article focuses on the role of nurses and nursing administrators in quality improvement of a hospital and the relationship of nursing workforce to patient treatment and care. The barriers for successful implementation of quality improvement policies in a health care setting and remedial strategies to overcome those barriers. In addition, the importance of involvement of nursing managers in policy and decision making process is also argued. Annotated Bibliography...
5 Pages(1250 words)Annotated Bibliography

Difference between an Entrepreneur and an Intrapreneur

Summary and Analysis of Japanese, Korean and China Business

Economic issues for a country in Africa

...Religious Critiques about Gay Marriage Introduction The two articles, A Catholic Defense of Same-Sex Marriage and ‘Marriage is sacred’: The religious right’s arguments against ‘gay marriage’ in Australia offer an in-depth and detailed analysis of gay marriages in the society. The authors of the two articles strive to maintain objectivity by citing their works in order to validate the claims they make. Gay marriages among other forms of homosexuality remain contentious issues in the society with various people holding divergent views. The two articles portray the level of diversity. The authors of the two articles argue their respective cases systematically with the view to persuading...
2 Pages(500 words)Annotated Bibliography

...are undertaken (Klein, 2001). Moreover, the company encountered a worldwide scrutiny concerning labor practices, particularly on the issue of low wages, which caused it to transfer its production to another country, made easier due to its outsourcing nature (ibid). The company does not subscribe to setting-up of outsourcing process in unionized factories (Amey, et al. 2002). Poor young women in Indonesia flock from their homes to the Nike factories for a wage 20 percent less than the set minimum wage for a single adult, placed at around $2.25 per day (Christensen, 2001). It means that although Nike provides jobs through outsourcing, factory workers find it hard to get by due to low wages. Moreover,...
19 Pages(4750 words)Annotated Bibliography
sponsored ads
Save Your Time for More Important Things
Let us write or edit the annotated bibliography on your topic "Annotated Bibliography: Issue - Relocation of International Religious Workers Away from Affected EBOLA Regions in West Africa" with a personal 20% discount.
GRAB THE BEST PAPER