Comments (0)
Add to wishlistDelete from wishlist
Cite this document
Summary
Organizational change is a strategy, which has to be embraced by businesses especially with the technological advances and globalization of the economy. However, for the implementation of change to be successful, it is important for the managers and team leader to come up with…
Download full paperFile format: .doc, available for editing
HIDE THIS PAPERGRAB THE BEST PAPER98.6% of users find it useful 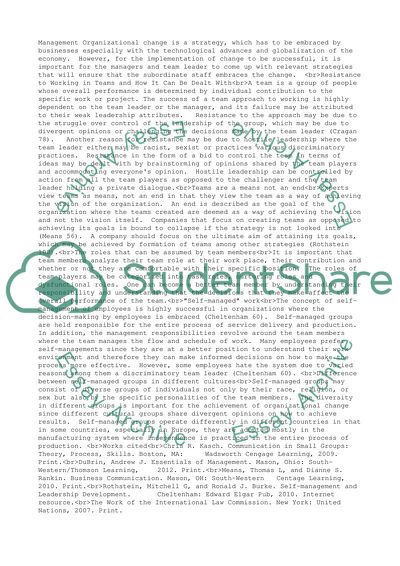 Management Organizational change is a strategy, which has to be embraced by businesses especially with the technological advances and globalization of the economy. However, for the implementation of change to be successful, it is important for the managers and team leader to come up with relevant strategies that will ensure that the subordinate staff embraces the change.
Resistance to Working in Teams and How It Can Be Dealt With
A team is a group of people whose overall performance is determined by individual contribution to the specific work or project. The success of a team approach to working is highly dependent on the team leader or the manager, and its failure may be attributed to their weak leadership attributes. Resistance to the approach may be due to the struggle over control of the leadership of the group, which may be due to divergent opinions or challenging the decisions made by the team leader (Cragan 78). Another reason for resistance may be due to hostile leadership where the team leader either may be racist, sexist or practices various discriminatory practices. Resistance in the form of a bid to control the team in terms of ideas may be dealt with by brainstorming of opinions shared by the team players and accommodating everyone’s opinion. Hostile leadership can be controlled by action from all the team players as opposed to the challenger and the team leader holding a private dialogue.
Teams are a means not an end
Experts view teams as means, not an end in that they view the team as a way of achieving the vision of the organization. An end is described as the goal of the organization where the teams created are deemed as a way of achieving the vision and not the vision itself. Companies that focus on creating teams as opposed to achieving its goals is bound to collapse if the strategy is not looked into (Means 56). A company should focus on the ultimate aim of attaining its goals, which may be achieved by formation of teams among other strategies (Rothstein 100).
The roles that can be assumed by team members
It is important that team members analyze their team role at their work place, their contribution and whether or not they are comfortable with their specific position. The roles of team players may be categorized into task roles, nurturing roles and dysfunctional roles. One can become a better team member by understanding their responsibility and understanding that the decisions that they make affect the overall performance of the team.
“Self-managed” work
The concept of self-management of employees is highly successful in organizations where the decision-making by employees is embraced (Cheltenham 60). Self-managed groups are held responsible for the entire process of service delivery and production. In addition, the management responsibilities revolve around the team members where the team manages the flow and schedule of work. Many employees prefer self-managements since they are at a better position to understand their work environment and therefore they can make informed decisions on how to make the process more effective. However, some employees hate the system due to varied reasons among them a discriminatory team leader (Cheltenham 60).
Difference between self-managed groups in different cultures
Self-managed groups may consist of diverse groups of individuals not only by their race, religion, or sex but also by the specific personalities of the team members. The diversity in different groups is important for the achievement of organizational change since different cultural groups share divergent opinions on how to achieve results. Self-managed groups operate differently in different countries in that in some countries, especially in Europe, they are adopted mostly in the manufacturing system where independence is practiced in the entire process of production.
Works cited
Chris R. Kasch. Communication in Small Groups: Theory, Process, Skills. Boston, MA: Wadsworth Cengage Learning, 2009. Print.
DuBrin, Andrew J. Essentials of Management. Mason, Ohio: South-Western/Thomson Learning, 2012. Print.
Means, Thomas L, and Dianne S. Rankin. Business Communication. Mason, OH: South-Western Centage Learning, 2010. Print.
Rothstein, Mitchell G, and Ronald J. Burke. Self-management and Leadership Development. Cheltenham: Edward Elgar Pub, 2010. Internet resource.
The Work of the International Law Commission. New York: United Nations, 2007. Print. Read More
Share:
Tags
Cite this document
(“Teamwork Coursework Example | Topics and Well Written Essays - 500 words”, n.d.)
Retrieved from https://studentshare.org/management/1656665-teamwork

CHECK THESE SAMPLES OF Teamwork

...and Australian organizations where researches were conducted and in which the results derived reflected the importance of team work for closing competency gaps existing in organizations. Researchers are also of the opinion that today’s work cultures are greatly influenced by the external conditions because of which employers have been focusing more on their workforce. This has brought greater emphasis on teamwork and group activities. Lastly the practical implications speak about the applicability of team works in the manufacturing, healthcare and information and technology sector. This has been the cause of work breakdown structures which can only be accomplished through group efforts. Table of Contents Executive...
8 Pages(2000 words)Essay

...?Reflection on teamwork: This essay reflects over my experience of teamwork, in which my mates and I had completed a project recently. To maintain the anonymity of the team mates, I call them Student A, B, C, D, and E. Of these, I was student E. In our group of five, students A, B, C, and D were Australian and the only non-Australian student was me. I came from China. The cultural differences made me stand out of the group at a communicative level. The Australians fluently spoke to one another and quite often, I would feel left out. I tried to join them in the conversation. But I used to take too long to think about right words to construct the sentence, which would not only be embarrassing for me, but...
4 Pages(1000 words)Essay

...? Teamwork In delivery of services in an organisation, stakeholders can participate in various activities as individuals or in teams so that improve the operation. This implies that stakeholders can complement each other so that the organisation for which they work can achieve its goals. The complementary activity between various people in the organisation means that teams are important and if they are enhanced by effective communication and leadership, they are can achieve very high and quality productivity. Teams create environment that enables members to contribute towards the activity of the organisation with vigour and by challenging each other, they contribute to efficient services in the company (Meads et al, 2005,...
4 Pages(1000 words)Essay

...Part I In the business environment of the 21st century teamwork has become a factor that differentiates successful companies from struggling firms. The management team of companies must find ways to make teams become more productive. A way to achieve greater results from team setting in the workplace is by fostering cohesiveness. Cohesiveness in a group or team is the degree to which members are attracted to a group and motivated to remain a part of it (Schermerhorn & Hunt & Osborn, 2003, p.201). The purpose of this essay is to evaluate the impact team cohesiveness performance of employees in the corporate world. In organizations in which cohesiveness is present within team settings the members of the team display...
4 Pages(1000 words)Essay

...Teamwork Teamwork Teamwork or handling of tasks as a group is one of the most important aspects of a successful organization since it is highly effective. Teamwork is usually effective because it makes task completion easier as individuals combine efforts to deal with a common challenge. For instance, if individuals work in a group of five to complete an organizational assignment, they would complete it much faster and in a better way than a single individual would have done. This is because each individual in the group contributes different ideas that at times lead to innovation. Introduction of teamwork in the organization is a gradual process that requires patience and hard work both from the employees and their supervisors... . To...
1 Pages(250 words)Essay

...﻿Teamwork Philosophy Present day business atmosphere is fiercely competitive and to gain a competitive edge over rival organizations, the importanceof role played by teamwork cannot be ignored. There is a huge responsibility on the shoulders of the manger who is put in charge of a team to satisfactorily accomplish a new project. As a conscientious manager who is trusted with such important and career-defining responsibility, I consider tolerance to be one of the greatest assets needed to motivate team members to work closely together. Because this happens to be my greatest professional strength fortunately, I believe that it can immensely help me in getting along with my teammates despite difference of...
4 Pages(1000 words)Essay

Let us find you another Coursework on topic Teamwork for FREE!