Comments (0)
Add to wishlistDelete from wishlist
Cite this document
Summary
According to Cooper (2007), studies show that the world loses approximately five million children due to malnutrition related diseases. Most of these children come from developing…
Download full paperFile format: .doc, available for editing
HIDE THIS PAPERGRAB THE BEST PAPER93.9% of users find it useful 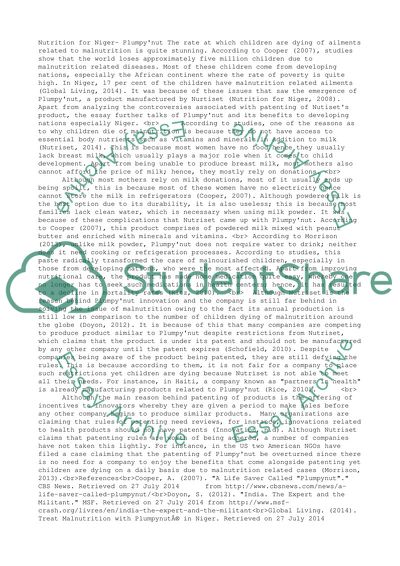 Nutrition for Niger- Plumpy’nut The rate at which children are dying of ailments related to malnutrition is quite stunning. According to Cooper (2007), studies show that the world loses approximately five million children due to malnutrition related diseases. Most of these children come from developing nations, especially the African continent where the rate of poverty is quite high. In Niger, 17 per cent of the children have malnutrition related ailments (Global Living, 2014). It was because of these issues that saw the emergence of Plumpy’nut, a product manufactured by Nurtiset (Nutrition for Niger, 2008). Apart from analyzing the controversies associated with patenting of Nutiset’s product, the essay further talks of Plumpy’nut and its benefits to developing nations especially Niger.
According to studies, one of the reasons as to why children die of malnutrition is because they do not have access to essential body nutrients such as vitamins and minerals in addition to milk (Nutriset, 2014). This is because most women have no food hence they usually lack breast milk, which usually plays a major role when it comes to child development. Apart from being unable to produce breast milk, most mothers also cannot afford the price of milk; hence, they mostly rely on donations.
Although most mothers rely on milk donations, most of it usually ends up being spoilt, this is because most of these women have no electricity hence cannot store the milk in refrigerators (Cooper, 2007). Although powdered milk is the best option due to its durability, it is also useless; this is because most families lack clean water, which is necessary when using milk powder. It was because of these complications that Nutriset came up with Plumpy’nut. According to Cooper (2007), this product comprises of powdered milk mixed with peanut butter and enriched with minerals and vitamins.
According to Morrison (2013), unlike milk powder, Plumpy’nut does not require water to drink; neither does it need cooking or refrigeration processes. According to studies, this paste radically transformed the care of malnourished children, especially in those from developing nations, who were the most affected. Apart from improving nutritional care, the product has made home medication quite easy, whereby one no longer has to seek such medications in health centers; hence, it has resulted to a decline in mortality rates (Ritz, 2010).
Although Nutriset is the reason behind Plumpy’nut innovation and the company is still far behind in solving the issue of malnutrition owing to the fact its annual production is still low in comparison to the number of children dying of malnutrition around the globe (Doyon, 2012). It is because of this that many companies are competing to produce product similar to Plumpy’nut despite restrictions from Nutriset, which claims that the product is under its patent and should not be manufactured by any other company until the patent expires (Schofield, 2010). Despite companies being aware of the product being patented, they are still defying the rules. This is because according to them, it is not fair for a company to place such restrictions yet children are dying because Nutriset is not able to meet all their needs. For instance, in Haiti, a company known as “partners in health” is already manufacturing products related to Plumpy’nut (Rice, 2010).
Although the main reason behind patenting of products is the offering of incentives to innovators whereby they are given a period to make sales before any other company begins to produce similar products. Many organizations are claiming that rules of patenting need reviews, for instance, innovations related to health products should not have patents (Innovation, n.d). Although Nutriset claims that patenting rules are worth of being adhered, a number of companies have not taken this lightly. For instance, in the US two American NGOs have filed a case claiming that the patenting of Plumpy’nut be overturned since there is no need for a company to enjoy the benefits that come alongside patenting yet children are dying on a daily basis due to malnutrition related cases (Morrison, 2013).
References
Cooper, A. (2007). “A Life Saver Called "Plumpynut".” CBS News. Retrieved on 27 July 2014 from http://www.cbsnews.com/news/a-life-saver-called-plumpynut/
Doyon, S. (2012). “India. The Expert and the Militant.” MSF. Retrieved on 27 July 2014 from http://www.msf-crash.org/livres/en/india-the-expert-and-the-militant
Global Living. (2014). Treat Malnutrition with Plumpynut® in Niger. Retrieved on 27 July 2014 from http://www.globalgiving.org/projects/malnutrition-plumpynut-children-niger/
Innovation. (n.d). Pharmaceutical Patents. Retrieved on 27 July 2014 from http://www.innovation.org/documents/File/Pharmaceutical_Patents.pdf
Morison, S. (2013). “PlumpyNut: The lifesaver that costs... well, peanuts.” The Independent. Retrieved on 27 July 2014 from http://www.independent.co.uk/news/world/africa/plumpynut-the-lifesaver-that-costs- well-peanuts-8783650.html
Nutriset. (2014). Plumpy’Nut® and the CMAM Approach: How Nutrisets R&D Has Helped Change the Way to Transform Severe Acute Malnutrition. Retrieved on 27 July 2014 from http://www.nutriset.fr/en/innovation/plumpynut-cmam-example.html
Nutrition for Niger-Plumpynut. (2008). [Video File]. Retrieved on 27 July 2014 from https://www.youtube.com/watch?v=6VSCMoRDp2c
Rice, A. (2010). “The Peanut Solution.” The New York Times. Retrieved on 27 July 2014 from http://www.nytimes.com/2010/09/05/magazine/05Plumpy-t.html?pagewanted=all&_r=0
Ritz, L. (2010). “The Saga of Plumpy’nut and Patents.” Boston University School of public Health. Retrieved on 27 July 2014 from http://www.bu.edu/themovement/past- issues/spring2011/the-saga-of-plumpy/
Schofield, H. (2010). “Legal fight over Plumpynut, the hunger wonder-product.” BBC News. Retrieved on 27 July from http://news.bbc.co.uk/2/hi/europe/8610427.stm Read More
Share:
Tags
Cite this document
(“Case Study: Nutrition for Niger Plumpynut / Issues Bibliography Paper Study”, n.d.)
Case Study: Nutrition for Niger Plumpynut / Issues Bibliography Paper Study. Retrieved from https://studentshare.org/management/1653700-case-study-nutrition-for-niger-plumpynut-issues-bibliography-paper

...Health and Nutrition Case History The patient is a 41year old female who has three children. She has been suffering from constipation for many years. She is diagnosed to be overweight and this contributes to the other health related problems. Apart from these problems she does not have any hereditary diseases and her parents died only at the age of 95. Though her parents were diseased, she has not inherited any of the hereditary diseases. But she suffers from constipation and this problem has been a regular one. Another major problem is her weight and to maintain a proper weight she should follow a diet that proposes the adequate nutrition. To get rid of these problems she has to reduce her weight and...
8 Pages(2000 words)Case Study

...College: Management Issues and Policies (COSTCO) Costco Wholesale Corporation was originally founded in Kirkland, Washington way back in September 15, 1983. Since then Costco has its headquarter moved and is currently situated in Issaquah, Washington, United States. The corporation also enjoys good trade existence in countries such as Canada, Japan, Australia, Taiwan, Mexico, South Korea, and the United Kingdom. Costco Wholesale Corporation is one of the organizations currently dominating the news on array of issues. Costco is in fact the major membership stockroom guild chain in the entire United States of America. Indeed as of 2009 in July[update] it is the third known chief dealer in the United...
7 Pages(1750 words)Case Study

...of blood to various body parts; they exhibit differences both structurally and functionally. While capillaries are one cell thick, they lack valves, muscular walls and have narrow lumens, and are smaller than both the arteries and veins; the veins have valves, are thin walled and have a wide lumen. The arteries on the other hand have thick muscular walls, narrow lumen and have high pulses of blood flow. Bibliography BEST, C. H., & TAYLOR, N. B. (2010). The living body; a text in human physiology. New York, Holt, Rinehart and Winston. NEVILLE, M. C., & NEIFERT, M. R. (1983). Lactation: physiology, nutrition, and breast-feeding. New York, Plenum Press. SADLER, M. J., STRAIN, J. J., & CABALLERO, B. (1999)....
8 Pages(2000 words)Case Study

...Running Head: The Role of Nutrition in the Field of Nursing. Nutrition in Nursing. College Nutrition is important in nursing thus the need for nurses to nutritional literacy in order to provide holistic patience care. For Elizabeth who has moved to a new environment with different food types it is important if she has any dietary recommendations for medical reasons. Establishing this information will be important in designing a new diet for her in the new settings considering she mentions that she misses brown bread and fresh fruits. It will be important to find out from her if she is allergic to any food, if she is strict vegetarian and if there family has any history of...
1 Pages(250 words)Case Study

...Case study: Disney marketing nutrition to children of Introduction The paper is a detailed analysis of the case study: Disney consumer products. It was observed that during 2004, several questions were raised about the nutrition level served by Disney at its entertainment parks and other food stores. The food manufacturers, media outlets and fast food companies that were related to Disney were criticized greatly. Disney considered this criticism as an opportunity and had taken initiatives to earn trust of consumers regarding their products (Bell & Winig, 2009). Define the problem The problem in this case study as recognized is growing obesity among children in the United States and Europe...
5 Pages(1250 words)Case Study

Case study for the Nutrition

...NUTRITION ASSIGNMENT PRESENTED BY: REG: …………………….. Question Cheese and steaks have high content of saturated fats. Saturated fats have no double bonds in their chemical structure, they are stable and are normally solids at room temperature and they are hard to oxidize hence the prolonged shelf life. Steak has small amounts of trans-rumenic acid and trans-vaccenic acid; both are categorized as omega-7 fats and control cholesterol levels by lowering LDL. Steak provides monounsaturated and polyunsaturated fats as well. These protect the heart by boosting HDL cholesterol levels. Question 2: Jenny’s diet is lacking in both fats and carbohydrates. Subcutaneous fats insulate the body against the adverse effects of cold...
2 Pages(500 words)Case Study

...﻿ Are Oil Multinational Companies in Developing Countries Socially Responsible? A Case Study of Shell in the Niger Delta Region of Nigeria Abstract Oil is one of the major sources of energy in the world and it is also a multibillion industry for most oil companies. It is however an enterprise which presents many dangers to the environment and to affected communities. This paper is being undertaken in order to determine whether or not oil multinational companies in developing countries are socially responsible. This is a case study focused on the effects of Shell Company in the Niger Delta region of Nigeria. This study established that Shell is not acting in a socially responsible...
14 Pages(3500 words)Case Study
sponsored ads
Save Your Time for More Important Things
Let us write or edit the case study on your topic "Case Study: Nutrition for Niger Plumpynut / Issues Bibliography Paper" with a personal 20% discount.
GRAB THE BEST PAPER

Let us find you another Case Study on topic Case Study: Nutrition for Niger Plumpynut / Issues Bibliography Paper for FREE!