Comments (0)
Add to wishlistDelete from wishlist
Cite this document
Summary
Humans are known to be arrogant and self-centered who care very little about their neighbors and the environment as long as they are enriching themselves…
Download full paperFile format: .doc, available for editing
HIDE THIS PAPERGRAB THE BEST PAPER93.3% of users find it useful 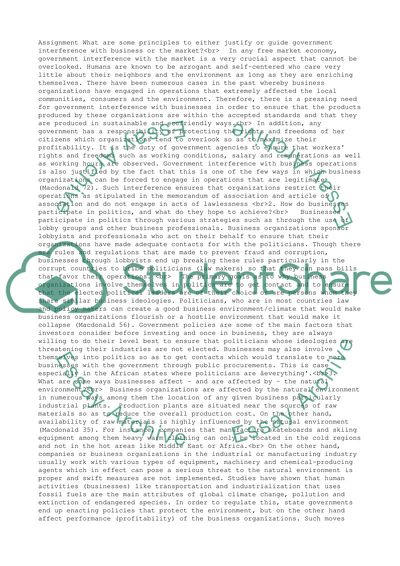 Assignment What are some principles to either justify or guide government interference with business or the market?
In any free market economy, government interference with the market is a very crucial aspect that cannot be overlooked. Humans are known to be arrogant and self-centered who care very little about their neighbors and the environment as long as they are enriching themselves. There have been numerous cases in the past whereby business organizations have engaged in operations that extremely affected the local communities, consumers and the environment. Therefore, there is a pressing need for government interference with businesses in order to ensure that the products produced by these organizations are within the accepted standards and that they are produced in sustainable and ecofriendly ways.
In addition, any government has a responsibility of protecting the rights and freedoms of her citizens which organizations tend to overlook so as to maximize their profitability. It is the duty of government agencies to ensure that workers’ rights and freedoms such as working conditions, salary and remunerations as well as working hours are observed. Government interference with business operations is also justified by the fact that this is one of the few ways in which business organizations can be forced to engage in operations that are legitimate (Macdonald 72). Such interference ensures that organizations restrict their operations as stipulated in the memorandum of association and article of association and do not engage in acts of lawlessness
2. How do businesses participate in politics, and what do they hope to achieve?
Businesses participate in politics through various strategies such as through the use of lobby groups and other business professionals. Business organizations sponsor lobbyists and professionals who act on their behalf to ensure that their organizations have made adequate contacts for with the politicians. Though there are rules and regulations that are made to prevent fraud and corruption, businesses through lobbyists end up breaking these rules particularly in the corrupt countries to bribe politicians (law makers) so that they can pass bills that favor their operations.
The primary goals as to why business organizations involve themselves in politics are to get contact and to ensure that the elected political leaders are of their choice or are persons whom they share similar business ideologies. Politicians, who are in most countries law and policy makers can create a good business environment/climate that would make business organizations flourish or a hostile environment that would make it collapse (Macdonald 56). Government policies are some of the main factors that investors consider before investing and once in business, they are always willing to do their level best to ensure that politicians whose ideologies are threatening their industries are not elected. Businesses may also involve themselves into politics so as to get contacts which would translate to more businesses with the government through public procurements. This is case especially in the African states where politicians are ‘everything’.
3. What are some ways businesses affect - and are affected by - the natural environment?
Business organizations are affected by the natural environment in numerous ways among them the location of any given business particularly industrial plants. Production plants are situated near the sources of raw materials so as to reduce the overall production cost. On the other hand, availability of raw materials is highly influenced by the natural environment (Macdonald 35). For instance, companies that manufacture skateboards and skiing equipment among them heavy warm clothing can only be located in the cold regions and not in the hot areas like Middle East or Africa.
On the other hand, companies or business organizations in the industrial or manufacturing industry usually work with various types of equipment, machinery and chemical-producing agents which in effect can pose a serious threat to the natural environment is proper and swift measures are not implemented. Studies have shown that human activities (businesses) like transportation and industrialization that uses fossil fuels are the main attributes of global climate change, pollution and extinction of endangered species. In order to regulate this, state governments end up enacting policies that protect the environment, but on the other hand affect performance (profitability) of the business organizations. Such moves include the need for permit licenses before businesses can start their operations and compliance certificates which are all added costs to businesses (Macdonald 42).
Works CitedTop of Form
Bottom of Form
Bottom of Form
Top of Form
Macdonald, Douglas. “Business and Environmental Politics in Canada.” Peterborough, Ont. [u.a.: Broadview Press, 2007. Print.
Bottom of Form Read More
Share:
Tags
Cite this document
(“3short questions Assignment Example | Topics and Well Written Essays - 500 words”, n.d.)
3short questions Assignment Example | Topics and Well Written Essays - 500 words. Retrieved from https://studentshare.org/management/1650975-3short-questions

CHECK THESE SAMPLES OF 3short questions

...Questions Questions Question Catholic churches are masculine because of their doctrine of God latria, which is simply worshippingjust God. A common misconception is that Catholic churches worship Mary who they rather accord her to the utmost honor as a mere creation of God. Honoring Mary is a deed of affection that always converts to God’s glory, which further shows the masculine nature of Catholic doctrine. On the other hand, Protestant churches are feminine as leaders proclaim women as overseers of key ceremonies. Seminaries of protestant churches comprise of 50% women and the ordained priests largely consist of clergy from female dominated professions like...
1 Pages(250 words)Essay
sponsored ads
Save Your Time for More Important Things
Let us write or edit the assignment on your topic "3short questions" with a personal 20% discount.
GRAB THE BEST PAPER

Let us find you another Assignment on topic 3short questions for FREE!