Comments (0)
Add to wishlistDelete from wishlist
Cite this document
Summary
Porter’s five forces are applied by different industries to find a position where they can defend themselves against competitors or competitive forces. This study analyses Porter’s five forces in relation to the Coca Cola Company. The company manufactures, markets and sells…
Download full paperFile format: .doc, available for editing
HIDE THIS PAPERGRAB THE BEST PAPER97.5% of users find it useful 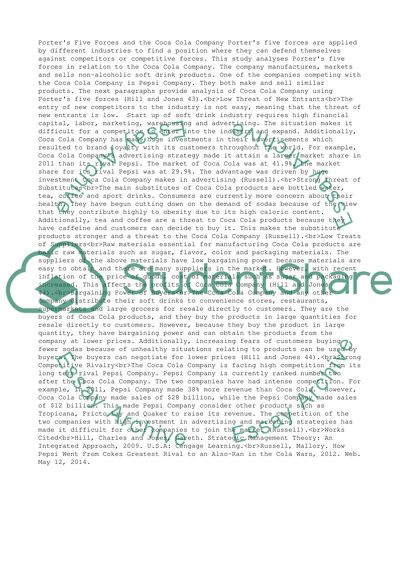 Porter’s Five Forces and the Coca Cola Company Porter’s five forces are applied by different industries to find a position where they can defend themselves against competitors or competitive forces. This study analyses Porter’s five forces in relation to the Coca Cola Company. The company manufactures, markets and sells non-alcoholic soft drink products. One of the companies competing with the Coca Cola Company is Pepsi Company. They both make and sell similar products. The next paragraphs provide analysis of Coca Cola Company using Porter’s five forces (Hill and Jones 43).
Low Threat of New Entrants
The entry of new competitors to the industry is not easy, meaning that the threat of new entrants is low. Start up of soft drink industry requires high financial capital, labor, marketing, warehousing and advertising. The situation makes it difficult for a competitor to enter into the industry and expand. Additionally, Coca Cola Company has made huge investments in their advertisements which resulted to brand loyalty with its customers throughout the world. For example, Coca Cola Company’s advertising strategy made it attain a larger market share in 2011 than its rival Pepsi. The market of Coca Cola was at 41.9%, the market share for its rival Pepsi was at 29.9%. The advantage was driven by huge investment Coca Cola Company makes in advertising (Russell).
Strong Threat of Substitutes
The main substitutes of Coca Cola products are bottled water, tea, coffee and sport drinks. Consumers are currently more concern about their health. They have begun cutting down on the demand of sodas because of the view that they contribute highly to obesity due to its high caloric content. Additionally, tea and coffee are a threat to Coca Cola products because they have caffeine and customers can decide to buy it. This makes the substitute products stronger and a threat to the Coca Cola Company (Russell).
Low Treats of Suppliers
Raw materials essential for manufacturing Coca Cola products are basic raw materials such as sugar, flavor, color and packaging materials. The suppliers of the above materials have low bargaining power because materials are easy to obtain and there are many suppliers in the market. However, with recent inflation of the price of goods, cost of materials such as sugar and packaging increased. This affects the profits of Coca Cola Company (Hill and Jones 44).
Bargaining Power of Buyers
The Coca Cola Company and any other company distribute their soft drinks to convenience stores, restaurants, supermarkets and large grocers for resale directly to customers. They are the buyers of Coca Cola products, and they buy the products in large quantities for resale directly to customers. However, because they buy the product in large quantity, they have bargaining power and can obtain the products from the company at lower prices. Additionally, increasing fears of customers buying fewer sodas because of unhealthy situations relating to products can be used by buyers. The buyers can negotiate for lower prices (Hill and Jones 44).
Strong Competitive Rivalry
The Coca Cola Company is facing high competition from its long term rival Pepsi Company. Pepsi Company is currently ranked number two after the Coca Cola Company. The two companies have had intense competition. For example, in 2011, Pepsi Company made 38% more revenue than Coca Cola. However, Coca Cola Company made sales of $28 billion, while the Pepsi Company made sales of $12 billion. This made Pepsi Company consider other products such as Tropicana, Fricto Lay and Quaker to raise its revenue. The competition of the two companies with high investment in advertising and marketing strategies has made it difficult for other companies to join the market (Russell).
Works Cited
Hill, Charles and Jones, Gareth. Strategic Management Theory: An Integrated Approach, 2009. U.S.A: Cengage Learning.
Russell, Mallory. How Pepsi Went From Cokes Greatest Rival to an Also-Ran in the Cola Wars, 2012. Web. May 12, 2014. Read More
Share:
Tags
Cite this document
(“Porter's five forces Case Study Example | Topics and Well Written Essays - 500 words”, n.d.)
Porter's five forces Case Study Example | Topics and Well Written Essays - 500 words. Retrieved from https://studentshare.org/management/1645918-porters-five-forces

...? Porter Five Forces Topic: Porter Five Forces Strategic management involves the decisions and actions taken to execute a company`s strategies which enables it to compete effectively with its environment. The first step in this process requires the managers to construct a precise strategy which works as a plan of action required for the attainment of the goals and plans set by an organization. In order to formulate this strategy or the plan of action, managers can use a very popular and effective model of Porter`s competitive forces and strategies. This model was a result...
3 Pages(750 words)Essay

...? Consumer technology industry Michael Porter’s 6 Forces Michael Porter arguers that there are six forces that determines a company’s competitiveness and that these forces may change over time as the company’s conditions change (Ha?ma?la?inen, 2004). These forces are entry threats, rivalry from existing competitors, threat of substitution, bargaining power of suppliers and the bargaining power of buyers and complementary factors. Entrants’ threat New entrants invade the existing market and bring competition and changes in the market environment (Ha?ma?la?inen, 2004). Entries divide the market amongst more sellers and decrease each...
4 Pages(1000 words)Research Paper

PESTEL and Porter Five Forces Analysis for the Metro Bank

...?PESTEL and Porter Five Forces Analysis for the Metro Bank PESTEL Analysis Political forces Political forces in the United Kingdom tend to favor the banking industry in the country because of the positive economic impact it has on the country’s economy, but at the same time, this force impose strict regulations on banks (Chrystal and Mizen, 2006). However, it must be understood that this particular relationship between the political forces in the United Kingdom and the banking industry is subject to change. Due to the wall of frustration that was seen it within the general population, the political forces...
4 Pages(1000 words)Essay

...Background The Five Forces by Michael Porter provides a realistic evaluation of prospective stages of profits, opportunity and risk of a company inan industry (Abell, 1999). The model of Porter is according to the framework of corporate strategy and the threats in the company's external environment. The model gives emphasis on the competitive strategy that an organization implements in accordance to their understanding of the structures in the industry and the changes they undergo (Bakos, 1998). Porter's has initiated the five forces that formed each industry and each market. This model distinguished the strength of...
10 Pages(2500 words)Essay

...Topic: 5 Porter Forces Affiliation: The five porter forces provide a large industrial analysis and a framework through which business strategic development is formed and evaluated. The forces ensure and maintain a balance of power within a business context as well as provide measures for competition among corporations, markets and industries. The building porter forces under Michels Patisserie, a large cake business influence the potential gains in the company and they include: Rivalry Rivals in a business context can exploit markets and even destroy it depending on the capacity to compete well. A company...
2 Pages(500 words)Essay

...﻿The Five Porter Forces The Porter five forces provide an analysis on which a company should base the production techniques and shows a balance of forces that determine the profitability of an industry. For a firm to ensure maximum profits there is need to use the model to understand the industry context so as to develop an edge over the immediate rivals. The underlying five forces that were given by Porter include the supplier power, buyer power, threat of substitutes, rivalry and entry barriers or threats of new entrants to a market (Greenwald & Kahn 57). Michael...
2 Pages(500 words)Essay

...Porter’s Five Forces al Affiliation Porter’s Five Forces Several companies have several strategies in ensuring that they remain financially relevant in the dynamic business world. It is a fact that in business, there are several challenges that may hinder the success of any business venture. These may range from the strength of the competitors, quality of the products as well as the nature of relationship maintained by the customers (Porter, 2011). However, business ventures always operate with the main motive of making profits. Therefore, profit maximization is always the key issue that drives all the business...
1 Pages(250 words)Essay

...industry is characterized by low profits, and issues of bankruptcies and losses (Hecker, 2001). In fact scholar explains that it is always difficult for an airline company to make some profits, because of this high level of competition (Fojt, 2006). The five biggest companies operating in United States are, American Airlines, Delta, South West, US Airways, and United Airlines. These companies are providing very high competition to companies such as Boeing and Air bus (Peoples, 2012). However, because of the similar strategies that they use, there is no major market leader in this industry. All these airline companies have to compete for a share in their market under consideration. Because of high competition in this...
2 Pages(500 words)Assignment

...Running Head: PORTER’S FIVE FORCES ON AMAZON PORTER’S FIVE FORCES ON AMAZON By State Date Porter’s Five Forces on Amazon Consumer Power Many Amazon buyers purchase popular products such as books simply because they either do not have the time to visit stores physically or find the conventional purchasing practice tedious. Second, Amazon buyers are inclined to become loyal because of Amazon’s low price offers that arise from low overhead costs (Cukier, Hodson, and Ryan, 2009, p. 4). These two factors raise the bargaining power of Amazon buyers. When Amazon fails to offer the lowest possible offers, the customer will simply search the internet for the next best price. Supplier Power Amazon enjoys a great deal of benefits... ...
2 Pages(500 words)Essay
sponsored ads
Save Your Time for More Important Things
Let us write or edit the case study on your topic "Porter's five forces" with a personal 20% discount.
GRAB THE BEST PAPER

Let us find you another Case Study on topic Porter's five forces for FREE!