Comments (0)
Add to wishlistDelete from wishlist
Cite this document
Summary
It would be very acceptable to the society. By opening the door to the bomb victims, it shows the company is observant of human rights. In addition, the firm will be fair in assisting the…
Download full paperFile format: .doc, available for editing
HIDE THIS PAPERGRAB THE BEST PAPER91.2% of users find it useful 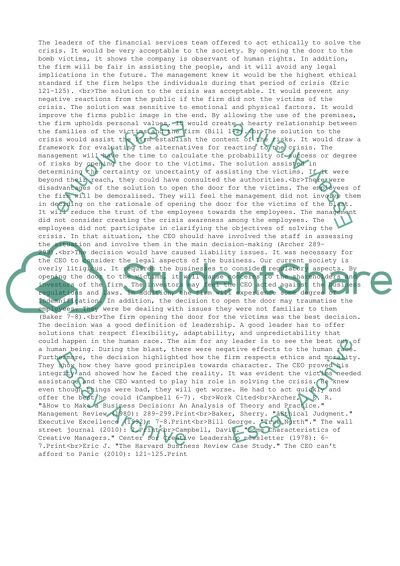 The leaders of the financial services team offered to act ethically to solve the crisis. It would be very acceptable to the society. By opening the door to the bomb victims, it shows the company is observant of human rights. In addition, the firm will be fair in assisting the people, and it will avoid any legal implications in the future. The management knew it would be the highest ethical standard if the firm helps the individuals during that period of crisis (Eric 121-125).
The solution to the crisis was acceptable. It would prevent any negative reactions from the public if the firm did not the victims of the crisis. The solution was sensitive to emotional and physical factors. It would improve the firms public image in the end. By allowing the use of the premises, the firm upholds personal values. It would create a hearty relationship between the families of the victims and the firm (Bill 1-2).
The solution to the crisis would assist the firm establish the content of the risks. It would draw a framework for evaluating the alternatives for reacting to the crisis. The management will have the time to calculate the probability of success or degree of risks by opening the door to the victims. The solution assisted in determining the certainty or uncertainty of assisting the victims. If it were beyond their reach, they could have consulted the authorities.
There were disadvantages of the solution to open the door for the victims. The employees of the firm will be demoralised. They will feel the management did not involve them in deciding on the rationale of opening the door for the victims of the blast. It will reduce the trust of the employees towards the employees. The management did not consider creating the crisis awareness among the employees. The employees did not participate in clarifying the objectives of solving the crisis. In that situation, the CEO should have involved the staff in assessing the situation and involve them in the main decision-making (Archer 289-299).
The decision would have caused liability issues. It was necessary for the CEO to consider the legal aspects of the business. Our current society is overly litigious. It requires the businesses to consider regulatory aspects. By opening the door to the victims, it will cause concerns to the shareholders and investors of the firm. The investors may feel the CEO acted against the business regulations and laws. In addition, the firm will experience some degree of indemnification. In addition, the decision to open the door may traumatise the employees. They were be dealing with issues they were not familiar to them (Baker 7-8).
The firm opening the door for the victims was the best decision. The decision was a good definition of leadership. A good leader has to offer solutions that respect flexibility, adaptability, and unpredictability that could happen in the human race. The aim for any leader is to see the best out of a human being. During the blast, there were negative effects to the human race. Furthermore, the decision highlighted how the firm respects ethics and morality. They show how they have good principles towards character. The CEO proved his integrity and showed how he faced the reality. It was evident the victims needed assistance and the CEO wanted to play his role in solving the crisis. He knew even though things were bad, they will get worse. He had to act quickly and offer the best he could (Campbell 6-7).
Work Cited
Archer, . E. R. "‘How to Make a Business Decision: An Analysis of Theory and Practice." Management Review (1980): 289-299.Print
Baker, Sherry. "‘Ethical Judgment." Executive Excellence (1992): 7-8.Print
Bill George. "True North”." The wall street journal (2010): 2.Print
Campbell, David. "Some Characteristics of Creative Managers." Center for Creative Leadership newsletter (1978): 6-7.Print
Eric J. "The Harvard Business Review Case Study." The CEO can’t afford to Panic (2010): 121-125.Print Read More
Share:
Tags
Cite this document
(“Case study Example | Topics and Well Written Essays - 500 words - 58”, n.d.)
Retrieved from https://studentshare.org/management/1642697-case-study