Comments (0)
Add to wishlistDelete from wishlist
Cite this document
Summary
The company serves all the citizens from different countries that are in dire need of food. In the event of any natural calamity, the program supplies food to such individuals. The organization…
Download full paperFile format: .doc, available for editing
HIDE THIS PAPERGRAB THE BEST PAPER94.7% of users find it useful 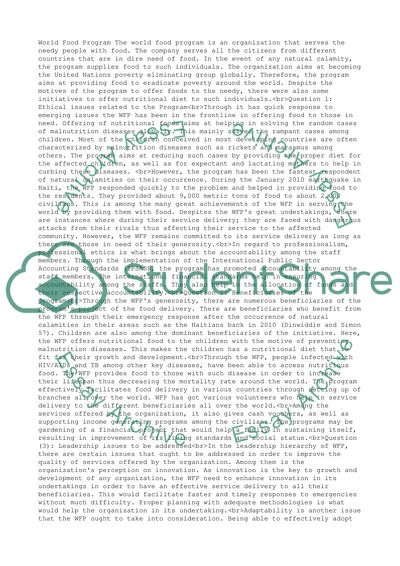 World Food Program The world food program is an organization that serves the needy people with food. The company serves all the citizens from different countries that are in dire need of food. In the event of any natural calamity, the program supplies food to such individuals. The organization aims at becoming the United Nations poverty eliminating group globally. Therefore, the program aims at providing food to eradicate poverty around the world. Despite the motives of the program to offer foods to the needy, there were also some initiatives to offer nutritional diet to such individuals.
Question 1: Ethical issues related to the Program
Through it has quick response to emerging issues the WFP has been in the frontline in offering food to those in need. Offering of nutritional foods aims at helping in solving the random cases of malnutrition diseases globally. This mainly solves the rampant cases among children. Most of the children conceived in most developing countries are often characterized by malnutrition diseases such as rickets and marasmus among others. The program aims at reducing such cases by providing the proper diet for the affected children, as well as for expectant and lactating mothers to help in curbing these diseases.
However, the program has been the fastest respondent of natural calamities on their occurrence. During the January 2010 earthquake in Haiti, the WFP responded quickly to the problem and helped in providing food to the residents. They provided about 9,000 metric tons of food to about 2,000 civilians. This is among the many great achievements of the WFP in serving the world by providing them with food. Despites the WFP’s great undertakings, there are instances where during their service delivery; they are faced with dangerous attacks from their rivals thus affecting their service to the affected community. However, the WFP remains committed to its service delivery as long as there are those in need of their generosity.
In regard to professionalism, professional ethics is what brings about the accountability among the staff members. Through the implementation of the International Public Sector Accounting Standards (IPSAS), the program has promoted accountability among the staff members. The international financial standards help in ensuring accountability among the staffs. They also help in the allocation of funds and their respective accountability.
Question 2: Beneficiaries of the program
Through the WFP’s generosity, there are numerous beneficiaries of the program’s project of the food delivery. There are beneficiaries who benefit from the WFP through their emergency response after the occurrence of natural calamities in their areas such as the Haitians back in 2010 (Dinwiddie and Simon 57). Children are also among the dominant beneficiaries of the initiative. Here, the WFP offers nutritional food to the children with the motive of preventing malnutrition diseases. This makes the children has a nutritional diet that is fit for their growth and development.
Through the WFP, people infected with HIV/AIDs and TB among other key diseases, have been able to access nutritious food. The WFP provides food to those with such disease in order to increase their lifespan thus decreasing the mortality rate around the world. The program effectively facilitates food delivery in various countries through setting up of branches all over the world. WFP has got various volunteers who help in service delivery to the different beneficiaries all over the world.
Among the services offered by the organization, it also gives cash vouchers, as well as supporting income generating programs among the civilians. The programs may be gardening of a financial project that would help a family in sustaining itself, resulting in improvement of its living standards and social status.
Question (3): Leadership issues to be addressed
In the leadership hierarchy of WFP, there are certain issues that ought to be addressed in order to improve the quality of services offered by the organization. Among them is the organization’s perception on innovation. As innovation is the key to growth and development of any organization, the WFP need to enhance innovation in its undertakings in order to have an effective service delivery to all their beneficiaries. This would facilitate faster and timely responses to emergencies without much difficulty. Proper planning with adequate methodologies is what would help the organization in its undertaking.
Adaptability is another issue that the WFP ought to take into consideration. Being able to effectively adopt in the different areas globally will help in the effective delivery of services, thus achieving the goals of the organizations. Having an eye for SWOT analysis is essential in order enhanced to make its activities much responsive to any changes in its operating environment. Strength, weakness, opportunities and threat analysis in the operations would greatly help in all decision making, whether long or short termed decisions.
Works cited
Dinwiddie, Robert, and Simon Lamb. Violent Earth. London: DK, 2011. Print.
The world food program (WFP). London: Department for International Development, 2006. Print. Read More
Share:
Tags
Cite this document
(“Case Summary Essay Example | Topics and Well Written Essays - 500 words - 4”, n.d.)
Case Summary Essay Example | Topics and Well Written Essays - 500 words - 4. Retrieved from https://studentshare.org/management/1637855-case-summary

CHECK THESE SAMPLES OF Case Summary

... employees arent giving specific reasons for their defection. The company must determine how to stop the exodus. Readers will explore questions such as how the CEO can play a stronger role in retaining top talent, how to create a safe environment for employees to express complaints, and how to make leaders throughout the organization more accountable for attracting and retaining talent. subjects covered: Employee retention Name: Tutor: College: Course: Date: Case Summary: Retaining Star Performers in Trying Times Problem: There are trying times when businesses face enormous challenges in their normal operations. These challenges could be caused by circumstances like impacts of global warming, global economic depression and so... ...
2 Pages(500 words)Essay

...W & Registrar of Marriages Hong Kong’s law making body had its nail biting observation of a trial at the court over the issue of transsexual marriage crises recently. While post operative male-to-female transsexual man’s or female-to-male transsexual woman’s issue has been treated on par with the constitutional provisions which determines that anatomically altered sexuality of a person does not constitute to legitimate sexuality with entitlement of marital rights according to the laws in Hong Kong. Sex reassignment surgeries (SRS) are on the rise in the country as it is similar in almost every country in the world. At this wake, it is disputable to fix the clash between legal and logical spheres of the case that relates...
5 Pages(1250 words)Term Paper

...Case 3 TOMS Shoes: Helping Soles All Over the World Case Summary Summary of the case TOMS Shoes, a company in the business of manufacturing shoes,is collaborating to provide shoes to the needy children worldwide through ‘One for One program. Tom Shoes has taken this decision to provide shoes to the needy children because children can become easy victim of certain foot related diseases, such as hookworms, podoconiosis, jiggers, and tetanus. Especial about One for One program is that the company will return back to those villages after a certain time where it has distributed one million pairs of new shoes through its customers to replace outgrown shoes with...
2 Pages(500 words)Essay

...Case Summary Case Summary The executive housekeeper Lisa Oliver complains to the hotels general manager AshleyAustin about poor performance of Paula Cooper. Paula has been working as a house keeper for 25 years and Lisa believes that Paulas age is the main reason of her low productivity. Paula cannot meet new bedding standards of the hotel. Other housekeepers have to help her after they finish their work. Even though the quality of her work is high, Lisa is not satisfied with the quantity. Ashley Austin has to decide whether to keep Paula or let Lisa fire her. While Lisa believe that age is the main reason of Paulas slow work, there are more possible explanations to the...
2 Pages(500 words)Essay

...Case Summary Q1. In evaluating its products lines and business operations, LEGO should ensure that the productlines and business operations fulfill the following criteria: strategic fit, financial viability, competitive advantage and partner viability. Q2. The changes in the marketplace mean that the future of the toy industry will undoubtedly change the way in which companies operate. The reduction in competition barriers in the industry is likely to heighten competition level because of easy market entry for new companies. However, acquisition by major firms is likely to lower the threat posed by smaller emerging companies. Q3. Despite its success in early periods of operation, LEGO faced some...
1 Pages(250 words)Assignment

...Case Summary The case study d as Emirates Airline: Connecting The Unconnected has been ed by Alcacer et al. and the purpose of this case study was to focus on the factors and the reasons due to which Emirates Airline had gained success (Alcacer 714). The author states that the company is at least 28 years old and during the period of 2013 the company was ranked amongst the three largest airlines throughout the world that operated at the commercial level. The case states that one of the factors that have contributed to the airline’s success is the customers it is targeting. Furthermore the locality of the airline provides it with a competitive advantage...
1 Pages(250 words)Assignment

...Case Summary How do firms in the supermarket industry make money? Some of the products offered by Trader Joe were sophisticated products to the consumers who were interested for good bargains. Trader Joe store offered products such as sprouted wheat bread, black rice and whole bean coffees which were not initially found at other supermarkets. He later chooses to sell many natural and organic foods after which the supermarket industry started offering private label items. Private labels items which included a variety of non-food items which catered for both educated to non-educated. (Nicholas 60) On the other hand, most of the supermarket stores are quite small in size but they are always stoked. Most...
2 Pages(500 words)Assignment
sponsored ads
Save Your Time for More Important Things
Let us write or edit the essay on your topic "Case Summary" with a personal 20% discount.
GRAB THE BEST PAPER

Let us find you another Essay on topic Case Summary for FREE!