Comments (0)
Add to wishlistDelete from wishlist
Cite this document
Summary
The case study reveals the leadership styles of Michael Abrashoff and Ricardo Semler in an effort to explain the changes brought by different leadership styles in managing different fields. Change is important but how well it is adapted by the relevant workforce is the most…
Download full paperFile format: .doc, available for editing
HIDE THIS PAPERGRAB THE BEST PAPER91.3% of users find it useful 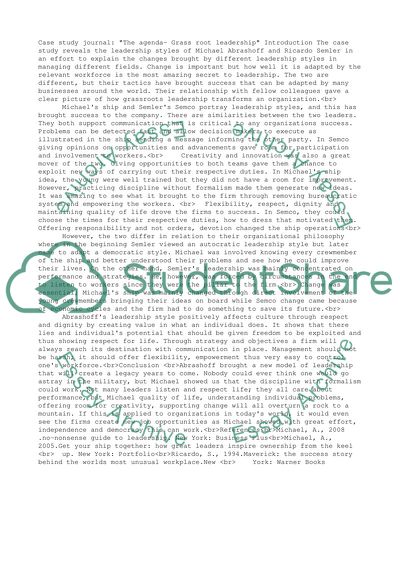 Case study journal: “The agenda- Grass root leadership” Introduction The case study reveals the leadership styles of Michael Abrashoff and Ricardo Semler in an effort to explain the changes brought by different leadership styles in managing different fields. Change is important but how well it is adapted by the relevant workforce is the most amazing secret to leadership. The two are different, but their tactics have brought success that can be adapted by many businesses around the world. Their relationship with fellow colleagues gave a clear picture of how grassroots leadership transforms an organization.
Michael’s ship and Semler’s Semco portray leadership styles, and this has brought success to the company. There are similarities between the two leaders. They both support communication that is critical to any organizations success. Problems can be detected fast and allow decision makers to execute as illustrated in the ship sending a message informing the other party. In Semco giving opinions on opportunities and advancements gave room for participation and involvement to workers.
Creativity and innovation was also a great mover of the two. Giving opportunities to both teams gave them a chance to exploit new ways of carrying out their respective duties. In Michael’s ship idea, the young were well trained but they did not have a room for improvement. However, practicing discipline without formalism made them generate new ideas. It was amazing to see what it brought to the firm through removing bureaucratic system and empowering the workers.
Flexibility, respect, dignity and maintaining quality of life drove the firms to success. In Semco, they could choose the times for their respective duties, how to dress that motivated them. Offering responsibility and not orders, devotion changed the ship operations
However, the two differ in relation to their organizational philosophy where in the beginning Semler viewed an autocratic leadership style but later came to adapt a democratic style. Michael was involved knowing every crewmember of the ship and better understood their problems and see how he could improve their lives. On the other hand, Semler’s leadership was mainly concentrated on performance and strategies. He, however, was forced by circumstances in the end to listen to workers since they were the pillar to the firm.
Change was essential; Michael’s ship was mainly changed through direct involvement of the young crewmembers bringing their ideas on board while Semco change came because of economic cycles and the firm had to do something to save its future.
Abrashoff’s leadership style positively affects culture through respect and dignity by creating value in what an individual does. It shows that there lies and individual’s potential that should be given freedom to be exploited and thus showing respect for life. Through strategy and objectives a firm will always reach its destination with communication in place. Management should not be harsh; it should offer flexibility, empowerment thus very easy to control one’s workforce.
Conclusion
Abrashoff brought a new model of leadership that will create a legacy years to come. Nobody could ever think one would go astray in the military, but Michael showed us that the discipline with formalism could work. Not many leaders listen and respect life; they all care about performance, but Michael quality of life, understanding individual problems, offering room for creativity, supporting change will all overturn a rock to a mountain. If this is applied to organizations in today’s world, it would even see the firms create new job opportunities as Michael showed with great effort, independence and democracy this can work.
References
Michael, A., 2008 .no-nonsense guide to leadership. New York: Business Plus
Michael, A., 2005.Get your ship together: how great leaders inspire ownership from the keel
up. New York: Portfolio
Ricardo, S., 1994.Maverick: the success story behind the worlds most unusual workplace.New
York: Warner Books Read More
Share:
Tags
Cite this document
(“Case study Example | Topics and Well Written Essays - 500 words - 48”, n.d.)
Case study Example | Topics and Well Written Essays - 500 words - 48. Retrieved from https://studentshare.org/management/1632634-case-study