Comments (0)
Add to wishlistDelete from wishlist
Cite this document
Summary
In some organizations, employees are compelled to join unions while in some they can choose to join or not to join.
People join trade unions so that they can…
Download full paperFile format: .doc, available for editing
HIDE THIS PAPERGRAB THE BEST PAPER93.5% of users find it useful 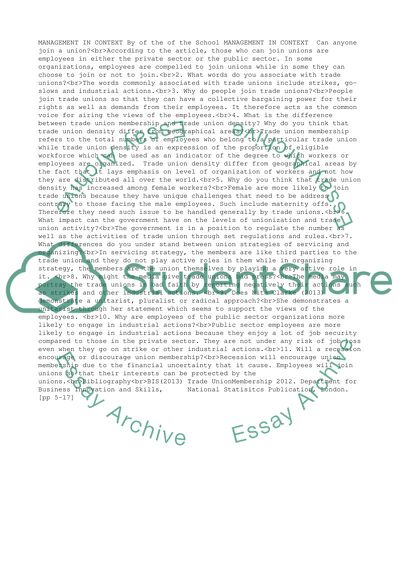 Extract of sample "Management in context"

MANAGEMENT IN CONTEXT By of the of the School MANAGEMENT IN CONTEXT Can anyone join a union?
According to the article, those who can join unions are employees in either the private sector or the public sector. In some organizations, employees are compelled to join unions while in some they can choose to join or not to join.
2. What words do you associate with trade unions?
The words commonly associated with trade unions include strikes, go-slows and industrial actions.
3. Why do people join trade unions?
People join trade unions so that they can have a collective bargaining power for their rights as well as demands from their employees. It therefore acts as the common voice for airing the views of the employees.
4. What is the difference between trade union membership and trade union density? Why do you think that trade union density differ from geographical areas?
Trade union membership refers to the total numbers of employees who belong to a particular trade union while trade union density is an expression of the proportion of eligible workforce which can be used as an indicator of the degree to which workers or employees are organized. Trade union density differ from geographical areas by the fact that it lays emphasis on level of organization of workers and not how they are distributed all over the world.
5. Why do you think that trade union density has increased among female workers?
Female are more likely to join trade unions because they have unique challenges that need to be address contrary to those facing the male employees. Such include maternity offs. Therefore they need such issue to be handled generally by trade unions.
6. What impact can the government have on the levels of unionization and trade union activity?
The government is in a position to regulate the number as well as the activities of trade union through set regulations and rules.
7. What differences do you under stand between union strategies of servicing and organizing?
In servicing strategy, the members are like third parties to the trade union and they do not play active roles in them while in organizing strategy, the members are the union themselves by playing a very active role in it.
8. Why might the media give trade unions bad press?
The media may portray the trade unions in bad faith by reporting negatively their actions such as strikes and other industrial actions.
9. Does Nita Clarke (2013) demonstrate a unitarist, pluralist or radical approach?
She demonstrates a unitarist through her statement which seems to support the views of the employees.
10. Why are employees of the public sector organizations more likely to engage in industrial actions?
Public sector employees are more likely to engage in industrial actions because they enjoy a lot of job security compared to those in the private sector. They are not under any risk of job loss even when they go on strike or other industrial actions.
11. Will a recession encourage or discourage union membership?
Recession will encourage union membership due to the financial uncertainty that it cause. Employees will join unions so that their interests can be protected by the unions.
Bibliography
BIS(2013) Trade UnionMembership 2012. Department for Business Innovation and Skills, National Statisitcs Publication, London. [pp 5-17] Read More
Share:
Tags
Cite this document
(“Management in context Essay Example | Topics and Well Written Essays - 250 words”, n.d.)
Management in context Essay Example | Topics and Well Written Essays - 250 words. Retrieved from https://studentshare.org/management/1629084-management-in-context

CHECK THESE SAMPLES OF Management in context

...to the authors of this article, in order to avoid the negative connotation that have become associated with the title ‘manager,’ they have resorted to titles like professional, entrepreneur or project leader. The author not only expresses strong feelings about the behavior of managers but also condemns it, thereby calling for changes to be made on the responsibilities that go with this title. The way every context that the authors looks at the title is simple spellbinding, which therefore calls for serious research and analysis on management as a discipline in order to correct the situation (Brocklehurst, Grey and Sturdy, 2010). Surprises in JA2 Academicians and...
4 Pages(1000 words)Assignment

...? Management in Context: The Impact of E-Business on Pizza Hut The research is undertaken to analyze the key implications of e-business on some aspects or function of Pizza Hut and evaluate how this has impacted on the way it is managed. Specifically, the following concerns would be addressed: (1) a presentation of a critical analysis of e-business on Pizza Hut’s operations and the potential challenges and opportunities it creates for modern business; (2) a discussion of the background of Pizza Hut with the rationale for choosing e-business as influencing current operations; (3) a critical evaluation on how this issue is being addressed within Pizza Hut and how this impacts on the way it...
8 Pages(2000 words)Essay

...in exhibitions, and increased focus on marketing especially the online channels. These activities again led to a loss of 3581 pounds which resulted in salary cuts and database management. The next significant phase included an overhaul of the distribution strategy as well as giving advertisements on television. The firm also entered into a strategic tie up with RAD. This coupled with contracting of orders and increasing the upscale selling activities led to a jump in the overall cumulative profit margins to 51799 pounds. The company’s strategies of dealing with the suppliers as well as promotional activities helped in generating good orders for the firm. This was significant as it was largely realised that long term...
6 Pages(1500 words)Essay

...?Surprises in JA1 This article demonstrates Ghoshal’s train of thought, which directs me to the management theories that business schools have taughtstudents over the years. I understood that the managers who graduate from business schools have been given the wrong education, which goes against many business ethics. Business schools seem to derive instruction from scientific theories, which then meet pessimistic ideologies that when implemented, turn into negative management practices. The article brought into scope two developments namely the pretense of knowledge and the ideology-based gloomy vision. These damaging theories have made students to believe that managers...
5 Pages(1250 words)Essay

...Running Head: CRITICAL EXPOSITION OF KNOWLEDGE Critical Exposition of Knowledge [The [The of the Critical Exposition of Knowledge Introduction According to the expert analysis bureaucratic management materialized from the work of Max Weber, who residential an "ideal replica" organisation, hierarchical in configuration, administers by a set of unfriendly, proper rules and policies. Weber supposed this was the most competent way to organise and administrate a project. Public administration has a extended history. There are mostly three stages in the development of public administration development, namely the early on administration, the customary model of administration and the original public management....
14 Pages(3500 words)Essay

...What is 'globalisation' and what could be its impact on the manager's job Discuss critically, drawing on a range of theories of globalisation. "Globalization can be a powerful and dynamic force for growth and development. If it is properly managed, the foundations for enduring and equitable growth at the international level can be laid. For that, it is essential to persevere in the search for consensual solutions through open and direct dialogue that takes account of the fundamental interests of all" (UNCTAD, 2000) This question involves the discussion of 'globalisation' in the context of management and its implications and impact upon a manager's job...
17 Pages(4250 words)Essay

...Table of Contents What can an understanding of power tell us about the context in which managers work? Power is a strong motivator in management. In fact it is the presence of power that creates the hierarchy between the manager and the managed. This hierarchy is required in order for the manager to implement the objectives of the company in a manner that is beneficial to the overall interests of the company. While there are different schools of thought on the use and explicit display of power in business organisations, almost all management schools accept the fact that the gradation of power between responsible positions...
14 Pages(3500 words)Essay

...Management in Context - Impact of Globalization on Manager’s Profession - Total Number of Words: 3,466 Table of Contents I. Introduction ……………………………………………………………… 3 II. Impact of Globalization on Managers’ Role and Responsibilities … 4 a. The Need to Implement and Promote Cultural Diversity within the Work Environment …………………. 5 b. The Shift from a Traditional Management Style to the Promotion of Self-efficient Employees ………………….. 7 c. The Need to Continuously Update One’s Own Learning and Promote Organizational Learning ………. 9 d. Shift from Authoritative or Transactional Leadership Style to Transformational Leadership...
14 Pages(3500 words)Essay

1 Pages(250 words)Essay
sponsored ads
Save Your Time for More Important Things
Let us write or edit the essay on your topic "Management in context" with a personal 20% discount.
GRAB THE BEST PAPER

Let us find you another Essay on topic Management in context for FREE!