Comments (0)
Add to wishlistDelete from wishlist
Cite this document
Summary
The main intention behind the creation of Mecca-Cola is the penetration of Muslim market. By considering the developments around Mecca-Cola, a…
Download full paperFile format: .doc, available for editing
HIDE THIS PAPERGRAB THE BEST PAPER95.2% of users find it useful 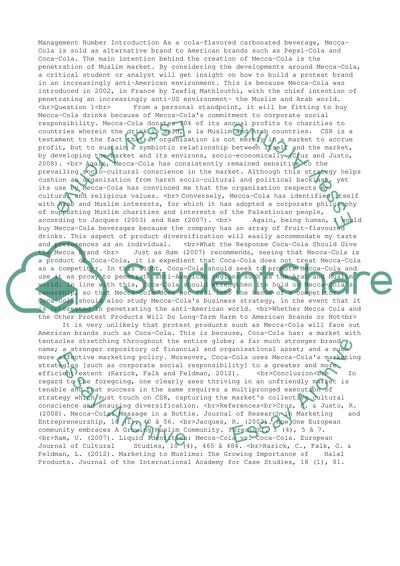 Management Number Introduction As a cola-flavored carbonated beverage, Mecca-Cola is sold as alternative brand to American brands such as Pepsi-Cola and Coca-Cola. The main intention behind the creation of Mecca-Cola is the penetration of Muslim market. By considering the developments around Mecca-Cola, a critical student or analyst will get insight on how to build a protest brand in an increasingly anti-American environment. This is because Mecca-Cola was introduced in 2002, in France by Tawfiq Mathlouthi, with the chief intention of penetrating an increasingly anti-US environment- the Muslim and Arab world.
Question 1
From a personal standpoint, it will be fitting to buy Mecca-Cola drinks because of Mecca-Cola’s commitment to corporate social responsibility. Mecca-Cola donates 10% of its annual profits to charities to countries wherein the drink is sold, a la Muslim and Arab countries. CSR is a testament to the fact that an organization is not merely in a market to accrue profit, but to sustain a symbiotic relationship between itself and the market, by developing the market and its environs, socio-economically (Cruz and Justo, 2008).
Again, Mecca-Cola has consistently remained sensitive to the prevailing socio-cultural conscience in the market. Although this strategy helps cushion an organization from harsh socio-cultural and political backlash, yet its use by Mecca-Cola has convinced me that the organization respects my cultural and religious values.
Conversely, Mecca-Cola has identified itself with Arab and Muslim interests, for which it has adopted a corporate philosophy of supporting Muslim charities and interests of the Palestinian people, according to Jacques (2003) and Ram (2007).
Again, being human, I would buy Mecca-Cola beverages because the company has an array of fruit-flavoured drinks. This aspect of product diversification will easily accommodate my taste and preferences as an individual.
What the Response Coca-Cola Should Give the Mecca Brand
Just as Ram (2007) recommends, seeing that Mecca-Cola is a product of Coca-Cola, it is expedient that Coca-Cola does not treat Mecca-Cola as a competitor. In this light, Coca-Cola should seek to promote Mecca-Cola and use it as proxy to penetrate anti-American regions such as the Arab and Muslim world. In line with this, Coca-Cola should strengthen its hold on Mecca-Cola’s ownership, so that Mecca-Cola does not fall into the hands of a competitor. Coca-Cola should also study Mecca-Cola’s business strategy, in the event that it is interested in penetrating the anti-American world.
Whether Mecca Cola and the Other Protest Products Will Do Long-Term Harm to American Brands or Not
It is very unlikely that protest products such as Mecca-Cola will face out American brands such as Coca-Cola. This is because, Coca-Cola has: a market with tentacles stretching throughout the entire globe; a far much stronger brand name; a stronger repository of financial and organisational asset; and a much more effective marketing policy. Moreover, Coca-Cola uses Mecca-Cola’s marketing strategies [such as corporate social responsibility] to a greater and more efficient extent (Rarick, Falk and Feldman, 2012).
Conclusion
In regard to the foregoing, one clearly sees thriving in an unfriendly market is tenable and that success in the same requires a multipronged execution of strategy which must touch on CSR, capturing the market’s collective cultural conscience and ensuring diversification.
References
Cruz, C. & Justo, R. (2008). Mecca-Cola: Message in a Bottle. Journal of Research in Marketing and Entrepreneurship, 10 (1), 40 – 56.
Jacques, R. (2003). How One European community embraces A Growing Muslim Community. Foresight, 5 (4), 5 – 7.
Ram, U. (2007). Liquid Identities: Mecca-Cola vs. Coca-Cola. European Journal of Cultural Studies, 10 (4), 465 – 484.
Rarick, C., Falk, G. & Feldman, L. (2012). Marketing to Muslims: The Growing Importance of Halal Products. Journal of the International Academy for Case Studies, 18 (1), 81. Read More
Share:
Tags
Cite this document
(“Mecca Cola: Building a Protest Brand in an Increasingly Anti-American Case Study”, n.d.)
Mecca Cola: Building a Protest Brand in an Increasingly Anti-American Case Study. Retrieved from https://studentshare.org/management/1625217-mecca-cola-building-a-protest-brand-in-an-increasingly-anti-american-environment

CHECK THESE SAMPLES OF Mecca Cola: Building a Protest Brand in an Increasingly Anti-American Environment

...?Ramakrishna Surampudi 06 August Building a Services Brand Introduction: A study points out that in 1989, 62.6% of the workforce in India was engaged in agriculture, 10.8% in industry and 15% in services. In stark contrast, in the same year, in the United States, 2.8% of the labor force was absorbed in agriculture, 18.4% in industry and 78.8% in services (Dash 109). This shows the extent to which the services sector dominates developed economies. Success of a services brand is driven principally, on the one hand, by the quality of services and, on the other, by customers’ service experiences. The former is an internal factor and the latter an external one. Striking a balance between the customer-centered approach and the internal... ...
5 Pages(1250 words)Essay

...easily available to consumers across the globe. Coca Cola, the most recognized soft drink brand in the world, is undoubtedly the firm’s most significant source of brand equity. Earlier, the brand focused on three major aspects such as affordability, availability, and acceptability. However, customer needs and business trends have dramatically changed over the last few decades and therefore Coke has transferred its focus to price value, preference, and pervasive penetration. As part of building brand identity, Coke tests nearly 20 brand attributes every month involving over 4000 customers. This strategy greatly aids the...
6 Pages(1500 words)Essay

...? Brand Building Brand Building The management of a company’s brand is one of the pivotal roles played by the marketing department. A brand defines the term, symbol, name or design, as well as any other characteristic that identifies a company’s products as distinctive from other companies’ products. Maintaining a strong brand image enables an organisation maintain its place within the market while also sustaining its profitability. Brand image refers to the impression in customers’ minds of the total personality, both real and perceived qualities, of a brand. Brand image...
4 Pages(1000 words)Essay

...companies appear to be moving away from the masterbrand strategy preferring to spend their effort on building the character of individual brands within the portfolio. Company names, where used, are being applied more as a brand endorsement rather than being promoted as the master brand. (Kumar, 1998) Brand relationships Consumers are most likely to buy Nestle products in categories where there is a strong brand leader, supported by highly visible advertising campaigns. The purchase of Nestle products across food categories is closely linked to the profile of the category consumers. Taste, trust and quality are the key reasons for...
16 Pages(4000 words)Case Study

...Up, or the promised Halal Fried Chicken. Indeed, many iconic American products could be given the Mecca make-over, by which Mecca, the name of the holiest city in Islam, is being appropriated as a commercial brand. Mathlouthi conceives his brand as entirely political in inspiration, claiming it is about combating 'America's imperialism and Zionism by providing a substitute for American goods and increasing the blockade of countries boycotting American goods'. Coca-Cola accuse him of exploiting the sensitivities of the Middle East for commercial ends. He blames the US government: 'It is not my problem; it...
9 Pages(2250 words)Essay

... American Music and Protest For Americans more than any other nation, Music has been an artistic medium for generating awareness and responding to political situations more than any other art form. What the British were able to do with poetry such as Charge of the Light Brigage, American artists did with songs such as The Green Beret. However, American music has not only supported the protestors and given the artists opinion about the wars the American governments have engaged in, the music has also been used to support wars and even poke fun at the protestors who do not agree with the concept of war. In essence, artists such as Haggard, Sandler, Dylan and Lennon used music to express what they were going through as a reaction... Okie from...
4 Pages(1000 words)Essay

...Brand Building Strategies: The Building Blocks Brand building strategies, also known as brand hierarchy structures, are used to group brands into families and to build relationships between a business and its brand. There are four main types of brand building strategies. One of these is a corporate branding strategy, where a corporate name is used on all products and services offered by the company. Proctor and Gamble uses the corporate branding strategy to promote its products. Products such as Crest, CoverGirl,...
2 Pages(500 words)Essay

...Marketing of a Coca-Cola Brand submitted Marketing of a Coca Cola Brand The goal of Coca-Cola is to re launch its sports drinks. Sports drinks of Coca-cola are the PowerAde and Aquarius brand.(Sami Ullah Khan, n.d.) It is a special product that needs a segmented market and different approach. a. Customer snapshot. Potential customers are young and old trendy people who work actively both in sports and in everyday living. They are the long distance travelers, drivers or night time workers, top sportsmen, athletes, racers, triathlon runners, pupils or students. They could be found anywhere around the world, but mostly in...
1 Pages(250 words)Essay

...In the Muslim tradition, the importance of Mecca cannot be underestimated. Ultimately, Mecca is the towards which all Muslims are directed to pray during their 5 daily prayers. Moreover, it is believed by Muslims that Mecca, and specifically Ka’ba (the first piece of earth every created according to Muslims) was also the site in which Abraham supposedly built the first mosque. However, if this is not enough, Mecca is also the site of the Hajj; a yearly trek that leads hundreds of thousands of Muslims to Mecca as a ritual that all Muslims are obliged to perform at least once. As the second most widely practiced religion in the world, hundreds of...
2 Pages(500 words)Essay
sponsored ads
Save Your Time for More Important Things
Let us write or edit the case study on your topic "Mecca Cola: Building a Protest Brand in an Increasingly Anti-American Environment" with a personal 20% discount.
GRAB THE BEST PAPER

Let us find you another Case Study on topic Mecca Cola: Building a Protest Brand in an Increasingly Anti-American Environment for FREE!