Comments (0)
Add to wishlistDelete from wishlist
Cite this document
Summary
There are five major dimensions of EQ testing. Firstly, knowing and managing your emotions is a key criterion for a strong emotional quotient. Apparently, Carver and Mia both are strong in this area as they are well-versed with their current emotional state with reference to issues and conditions faced by them…
Download full paperFile format: .doc, available for editing
HIDE THIS PAPERGRAB THE BEST PAPER97.4% of users find it useful 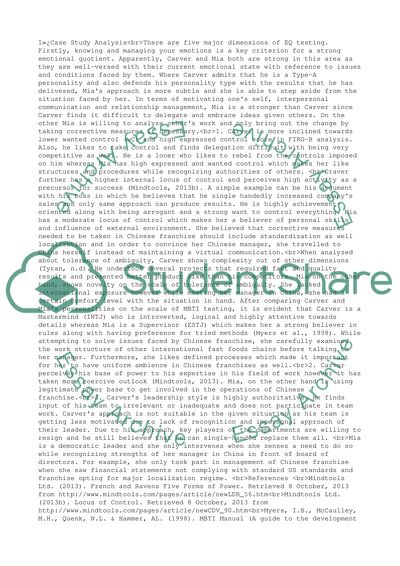 Extract of sample "Managment Class and Self-Awareness for Team Membership"

﻿Case Study Analysis
There are five major dimensions of EQ testing. Firstly, knowing and managing your emotions is a key criterion for a strong emotional quotient. Apparently, Carver and Mia both are strong in this area as they are well-versed with their current emotional state with reference to issues and conditions faced by them. Where Carver admits that he is a Type-A personality and also defends his personality type with the results that he has delivered, Mia’s approach is more subtle and she is able to step aside from the situation faced by her. In terms of motivating one’s self, interpersonal communication and relationship management, Mia is a stronger than Carver since Carver finds it difficult to delegate and embrace ideas given others. On the other Mia is willing to analyze other’s work and only bring out the change by taking corrective measures if necessary.
1. Carver is more inclined towards lower wanted control (wC) and high expressed control score in FIRO-B analysis. Also, he likes to take control and finds delegation difficult with being very competitive as well. He is a loner who likes to rebel from the controls imposed on him whereas Mia has high expressed and wanted control which makes her like structures and procedures while recognizing authorities of others.
Craver further has a higher internal locus of control and perceives high activity as a precursor for success (Mindtools, 2013b). A simple example can be his argument with his boss in which he believes that he single handedly increased company’s sales and only same approach can produce results. He is highly achievement-oriented along with being arrogant and a strong want to control everything. Mia has a moderate locus of control which makes her a believer of personal skills and influence of external environment. She believed that corrective measures needed to be taken in Chinese franchise should include standardization as well localization and in order to convince her Chinese manager, she travelled to China herself instead of maintaining a virtual communication.
When analyzed about tolerance of ambiguity, Carver shows complexity out of other dimensions (Tyran, n.d). He undertook several projects that required fast and quality results and presented better product like than his competitors. Mia on the other hand, shows novelty on the scale of tolerance of ambiguity. She lacked international exposure however while meeting her manager in China, she had a certain comfort level with the situation in hand. After comparing Carver and Mia’s personalities on the scale of MBTI testing, it is evident that Carver is a Mastermind (INTJ) who is introverted, logical and highly attentive towards details whereas Mia is a Supervisor (ESTJ) which makes her a strong believer in rules along with having preference for tried methods (Myers et al., 1998). While attempting to solve issues faced by Chinese franchise, she carefully examined the work structure of other international fast foods chains before talking to her manager. Furthermore, she likes defined processes which made it important for her to have uniform ambience in Chinese franchises as well.
2. Carver perceives his base of power to his expertise in his field of work however it has taken more coercive outlook (Mindtools, 2013). Mia, on the other hand is using legitimate power base to get involved in the operations of Chinese franchise.
3. Carver’s leadership style is highly authoritative. He finds input of his team to irrelevant or inadequate and does not participate in team work. Carver’s approach is not suitable in the given situation as his team is getting less motivated due to lack of recognition and impersonal approach of their leader. Due to his approach, key players of the departments are willing to resign and he still believes that he can single-handed replace them all.
Mia is a democratic leader and she only intervenes when she senses a need to do so while recognizing strengths of her manager in China in front of board of directors. For example, she only took part in management of Chinese franchise when she saw financial statements not complying with standard US standards and franchise opting for major localization regime.
References
Mindtools Ltd. (2013). French and Ravens Five Forms of Power. Retrieved 8 October, 2013 from http://www.mindtools.com/pages/article/newLDR_56.htm
Mindtools Ltd. (2013b). Locus of Control. Retrieved 8 October, 2013 from http://www.mindtools.com/pages/article/newCDV_90.htm
Myers, I.B., McCaulley, M.H., Quenk, N.L. & Hammer, AL. (1998). MBTI Manual (A guide to the development and use of the Myers Briggs type indicator). Consulting Psychologists Press.
Tyran, K.L. (n.d). Self-Awareness for Team Membership. Retrieved 8 October, 2013 from http://faculty.wwu.edu/tyrank/MGMT313/SAS2013.pdf Read More
Share:
Tags
Cite this document
(“Managment Class and Self-Awareness for Team Membership Case Study”, n.d.)
Managment Class and Self-Awareness for Team Membership Case Study. Retrieved from https://studentshare.org/management/1623377-case-study-analysis-for-managment-class

...responsible choices in their lives and take full consequences for their actions. Although some issues like abortion are controversial it is good to have a definite stance on them from a morality standpoint. The world is a harsh place to live in and no one gets away with wrongs committed to others, which is pretty much the reality we all have to face one time or another. Counselling requires a professional to engage in intimate work with their clients. As such a professional is supposed to be fully self-aware. A counsellor is not supposed to have emotional attachment with the relationship they share with the client. In detaching themselves emotionally counsellors are able to cope with personal challenges...
6 Pages(1500 words)Personal Statement

...that managers face while in their duty. Importantly, strategies that can help us attain self-awareness and development exists. As such, while in my managerial post, I will prioritize the idea of self-reflection and encourage my team to adopt the scheme in order to develop my productivity. References Armstrong, M. (2011). How to be an even better manager: A complete A-Z of proven techniques and essential skills. London: Kogan Page. Bishop, S. (2010). Develop your assertiveness. London: Kogan Page. Cohen, A. R., & Bradford, D. L. (2005). Influence without authority. Hoboken, N.J: Wiley. Euberger, J. (2007)....
5 Pages(1250 words)Essay

... Self Awareness Assignment Step one Self esteem is the overall reflection of a person’s emotional worth. I will improve my self esteem by dressing well in public for the next two years before completing my education. This is the importance I attach to dressing. I will double my expenditure in clothing to the tunes of at least three times the initial amount after every three months to achieve self esteem. This is the most essential opportunities applicable to my scenario despite the other avenues being in place. Other opportunities include associating with popular members of the society. Dressing codes have been used to denote not only culture, but ascribed status as well. Therefore, dressing will denote higher self esteem... . This will be...
5 Pages(1250 words)Essay

...?Self-Awareness Introduction Henry Fayol, and Mary Parker among other scholars in the field of management have described leadership as the act of getting thing done through others. This definition is consistent with the definition given by James who described leadership as the process of attaining organizational goals, of which these organizational goals are attained effectively and efficiently through the performance of certain leadership tasks such as directing, controlling, organizing, staffing, and planning (13-14). This self-awareness paper is based on leadership development from a personal perspective. This means that through this paper I aim at...
8 Pages(2000 words)Essay

...for assignments. I shall allocate all the assignments a given number of hours within the six hours in a week. In addition, I have requested my friend Tom that we keep each other on check especially on the issue of doing assignments. We have pledged to always share or struggles and points of weakness while helping one another to cope. References Ashley, G. C., & Reiter-Palmon, R. (2012). Self-awareness and the evolution of leaders: The need for a better measure of self-awareness. Journal of Behavioral and Applied Management, 14(1), 2-17. Retrieved on 1 February 2014 from http://search.proquest.com/docview/1082324501?accountid=45049 Jayashree, V. (2011)....
7 Pages(1750 words)Research Paper

...Running head: Personal Evaluation A Self-awareness report Lecturer Introduction For a person to develop a strong sense of self-mastery, he/she has to look at his own behaviour from different dimensions. The dimensions are summarized by two important aspects, namely, the self and the environment. The self is comprised of a consciousness of what happens within an individual through reflection and attentiveness of the body processes. Environment on the other hand is made of the physical and social interactions with other people as well as with the physical objects around the person. Striking a balance is only achieved by listening to “what,” “why,” and “how” one communicates with others. At the same time, continuous self-examination... of...
6 Pages(1500 words)Essay

...Team Case Study How did the two leaders negotiating style change/evolve as the film progressed? Two leaders, the colonel Saito and colonel Nicholsonwere changing their negotiation styles during the whole story. Their styles illustrated the evolution of the conflict in the context of the Stage III intentions, whereas “intentions intervene people’s perceptions and emotions and their overt behavior” (218). The stages of this evolution could be viewed from the perspective of Intentions and describes as following: Competing stage This was the initial stage of the two leaders at the beginning of the story, where both colonels were seeking “to satisfy their own interests regardless of the impact on their parties in the conflict”...
2 Pages(500 words)Essay

...SELF AWARENESS Key Strengths A strong interpersonal skill is critical in making one enjoy effective interaction in any social setting. In this regard, I believe I possess an added advantage as far as socialization with people of diverse social standing is concerned. This makes me fit to the uniform requirement in various employment opportunities in different organizations. My outstanding written and oral communication ability is a boost in respect of my career prospect in the organization of my interest. As an aspiring supervisor in a manufacturing company, this expertise is instrumental for the firm and my future career development. In the modern society, being an effective team player...
4 Pages(1000 words)Essay

Affect of oil on our economy

2 Pages(500 words)Essay
sponsored ads
Save Your Time for More Important Things
Let us write or edit the case study on your topic "Managment Class and Self-Awareness for Team Membership" with a personal 20% discount.
GRAB THE BEST PAPER

Let us find you another Case Study on topic Managment Class and Self-Awareness for Team Membership for FREE!