Comments (0)
Add to wishlistDelete from wishlist
Cite this document
Summary
Certain theorists assert that there is no difference between a leader and a manger, others are of the idea that both of the positions are two different ends of a paradigm and then there are those who believe that there are certain elements that overlap in both the position…
Download full paperFile format: .doc, available for editing
HIDE THIS PAPERGRAB THE BEST PAPER98.3% of users find it useful 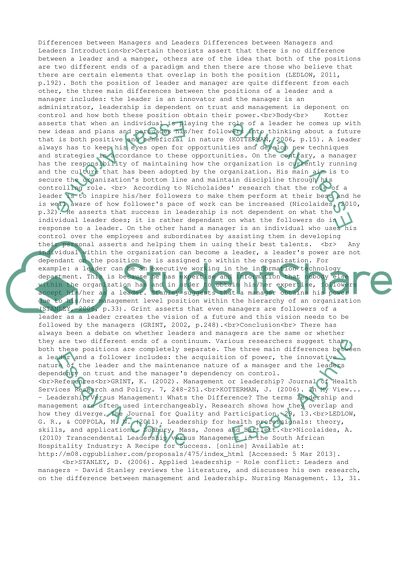 Extract of sample "3 key differences between managers and leaders"

Differences between Managers and Leaders Differences between Managers and Leaders Introduction
Certain theorists assert that there is no difference between a leader and a manger, others are of the idea that both of the positions are two different ends of a paradigm and then there are those who believe that there are certain elements that overlap in both the position (LEDLOW, 2011, p.192). Both the position of leader and manager are quite different from each other, the three main differences between the positions of a leader and a manager includes: the leader is an innovator and the manager is an administrator, leadership is dependent on trust and management is deponent on control and how both these position obtain their power.
Body
Kotter asserts that when an individual is playing the role of a leader he comes up with new ideas and plans and persuades his/her followers into thinking about a future that is both positive and beneficial in nature (KOTTERMAN, 2006, p.15). A leader always has to keep his eyes open for opportunities and develop new techniques and strategies in accordance to these opportunities. On the contrary, a manager has the responsibility of maintaining how the organization is currently running and the culture that has been adopted by the organization. His main aim is to secure the organization’s bottom line and maintain discipline through his controlling role.
According to Nicholaides’ research that the role of a leader is to inspire his/her followers to make them perform at their best and he is well aware of how follower’s pace of work can be increased (Nicolaides, 2010, p.32). He asserts that success in leadership is not dependent on what the individual leader does; it is rather dependant on what the followers do in response to a leader. On the other hand a manager is an individual who uses his control over the employees and subordinates by assisting them in developing their personal asserts and helping them in using their best talents.
Any individual within the organization can become a leader, a leader’s power are not dependant on the position he is assigned to within the organization. For example: a leader can be an executive working in the information technology department. This is because he has expertise and information that nobody else within the organization has and in order to obtain his/her expertise, followers accept him/her as a leader. Stanley suggests that a manager obtains his power due to his/her management level position within the hierarchy of an organization (STANLEY, 2006, p.33). Grint asserts that even managers are followers of a leader as a leader creates the vision of a future and this vision needs to be followed by the managers (GRINT, 2002, p.248).
Conclusion
There has always been a debate on whether leaders and managers are the same or whether they are two different ends of a continuum. Various researchers suggest that both these positions are completely separate. The three main differences between a leader and a follower includes: the acquisition of power, the innovative nature of the leader and the maintenance nature of a manager and the leaders dependency on trust and the manager’s dependency on control.
References
GRINT, K. (2002). Management or leadership? Journal of Health Services Research and Policy. 7, 248-251.
KOTTERMAN, J. (2006). In My View... - Leadership Versus Management: Whats the Difference? The terms leadership and management are often used interchangeably. Research shows how they overlap and how they diverge. The Journal for Quality and Participation. 29, 13.
LEDLOW, G. R., & COPPOLA, M. N. (2011). Leadership for health professionals: theory, skills, and applications. Sudbury, Mass, Jones and Bartlett.
Nicolaides, A. (2010) Transcendental Leadership versus Management in the South African Hospitality Industry: A Recipe for Success. [online] Available at: http://m08.cgpublisher.com/proposals/475/index_html [Accessed: 5 Mar 2013].
STANLEY, D. (2006). Applied leadership - Role conflict: Leaders and managers - David Stanley reviews the literature, and discusses his own research, on the difference between management and leadership. Nursing Management. 13, 31. Read More
Share:
Tags
Cite this document
(“3 key differences between managers and leaders Essay”, n.d.)
Retrieved from https://studentshare.org/management/1617097-3-key-differences-between-managers-and-leaders

“3 Key Differences Between Managers and Leaders Essay”, n.d. https://studentshare.org/management/1617097-3-key-differences-between-managers-and-leaders.
Comments (0)
Click to create a comment or rate a document

CHECK THESE SAMPLES OF 3 key differences between managers and leaders

...﻿Leaders and ManagersLeaders and managers within an organization are responsible for its success. By understanding the similarities and the distinct differences between the two processes helps to clarify their respective roles in the organization and how the roles influence an organization’s ability to accomplish its strategic goals and objectives. The purpose of this paper is to identify some of the overlapping characteristics and provide clarity to what distinguishes leaders from managers. In conclusion the paper will present and propose evidence to support the argument that managers in their capacity within the organization can be and do perform as leaders in the organizational hierarchy as well. The Role of Leaders... And...
6 Pages(1500 words)Term Paper

The role of managers and clinical leaders

...to employees. The interaction between the staff and patients should also be encouraged so that employees feel related to their jobs. The management could also improve motivation and staff morale by introducing flexible working schedules so that the staff does not feel over burdened and is actually satisfied with their jobs. Overall, the task of the management and other clinical leaders is to keep their staff employees motivated by introducing certain changes within the framework of the health organization. This would help improve the overall working of the organization as well (Factors affecting staff morale.., Web). Works Cited: "Performance...
3 Pages(750 words)Essay

...? Key Differences between Civil law and Criminal law In administration of justice, people depend on differentissues that surround the cases of involved according to the evidence given. Judgment is given according to the different sources of evidence that are availed in cases that presented to the judges or magistrates in a court of law. In this respect, people are likely to be convicted of the crime they committed or to be set free on the bases of lack of substantial evidence to charge them with the crimes they could have committed. According to different issues in administration of justice between two or more people or concerning...
4 Pages(1000 words)Essay

Development and Training Leaders and Managers

.... But the best way is to incorporate these training programs in college education curricula and in masteral studies in teaching education. The key to the development of the ideal manager and leader in education is the formulation of the right educational training programs and in the academe, the development of "priorities for faculty development that can strengthen the role of teacher education" ( Brittingham 1986). The hereinabove undertaking is facilitated by the Education Reform Act of 1988, whereby the set provisions are influenced by suggestions, advice and comments from respected academicians and other erudite personalities such as politicians, education officials and others...
13 Pages(3250 words)Essay

...What is Leadership? Introduction Gonzalez suggests that leadership is a social order condition where one person is in charge of another or a group of individuals. A leader however is more than only someone who has influence over others. A leader is also ascribed to be a risk taker and of imaginative personality. He or she is never fearful to venture out into new area. Such a person is inventive and daring, and strikes a unique character within his or her subjects. For instance, police workforce indicates self-sacrifice to people they view as leaders. There is quite a big difference between a leader and a boss. Most people who call...
2 Pages(500 words)Essay

... Your Teacher’s Condoms in Schools: The Battle Between Morality and Common Sense Condoms vs. Abstinence: The Role of Public Schools in Sex Education The issue surrounding the distribution of condoms in public schools has long been considered a topic of interest for more than a decade now. Articulate commentators from two opposing views often come up with sensible ideas and strong points that would further spice up their heated debates. In an essay written by Anna Quindlen, “Public & Private; A Pyrrhic Victory,” it is noted how the writer fervently defends the distribution of condoms in public schools. She emphasizes her standpoint by quoting statistics such as “in 1992 [Dr. Cohall’s] three high school clinics saw around 150 cases... of...
2 Pages(500 words)Essay

Difference between Leaders and Managers

...﻿Difference between Leaders and Managers In reference with the behavioral theories in leadership, the behavior of a leader is dependent to one’s leadership influences. This is easily reflected in the success of the group under the leader in question. China being a fast growing economy; therefore, we expect leaders in the nation to go by the demands of the economy, which entails high demand of products, as well as strikes and boycotts resulting from employees demanding revision of their salaries. This is normal, as leaders do not expect workers to go with the same wage despite the increase in the cost of...
1 Pages(250 words)Assignment

...﻿Leaders and Managers agree There exists a difference between nurse leaders and nurse managers despite the fact that many people fail to identify the same indeed. Whereas nursing management has the fundamental role in determining the operations of a nursing institution such as recruitment of new nurses, their retention, and well-being (Wesstphal, 2012). Ideally, such a role involves the management of the whole organization. A nursing leader on his part has the role of influencing changes in an organization, especially in a particular unit or area of specialization, towards obtaining the...
1 Pages(250 words)Essay

...﻿GOOD LEADERS, GOOD MANAGERS Introduction Good Management and leadership confuses many to be going hand in hand. The debate of whether good leaders means ability to manage effectively or if good managers make better automatically effectively has been traded to a varied opinions. The difference between the two can be well explained by the approach of achieve their respective targets. Leadership calls for provoking actions out of employees. In a firm’s scenario it involves making employees to understand and believes in a firm’s and the leaders vision and work with him in realizing the...
2 Pages(500 words)Admission/Application Essay

...and social care. Leadership development makes the executive level shift the pervasive culture to a new collaborative way of thinking. The drivers of this collaboration are leaders and the managers of health and social care, and it ensures that the patients receive high-quality care (Maura, Chang, Havaei & Chou, 2014). In addition, there is need to develop collaboration between the unit managers and their staff (White, Jackson, Besner, & Norris, 2013). Conclusion The NHS Leadership Framework has shown that leadership and management are only needed in healthcare if it focuses on shared responsibility in offering the care. Leadership, especially in health...
7 Pages(1750 words)Essay
sponsored ads
Save Your Time for More Important Things
Let us write or edit the essay on your topic "3 key differences between managers and leaders" with a personal 20% discount.
GRAB THE BEST PAPER

Let us find you another Essay on topic 3 key differences between managers and leaders for FREE!