Comments (0)
Add to wishlistDelete from wishlist
Cite this document
Summary
Human resource departments try to make sure that their employees’ rights are respected, and they are paid in the best standards possible…
Download full paperFile format: .doc, available for editing
HIDE THIS PAPERGRAB THE BEST PAPER92.5% of users find it useful 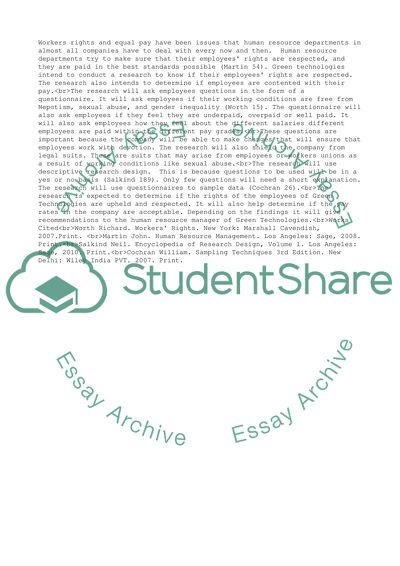 Workers rights and equal pay have been issues that human resource departments in almost all companies have to deal with every now and then. Human resource departments try to make sure that their employees’ rights are respected, and they are paid in the best standards possible (Martin 54). Green technologies intend to conduct a research to know if their employees’ rights are respected. The research also intends to determine if employees are contented with their pay.
The research will ask employees questions in the form of a questionnaire. It will ask employees if their working conditions are free from Nepotism, sexual abuse, and gender inequality (Worth 15). The questionnaire will also ask employees if they feel they are underpaid, overpaid or well paid. It will also ask employees how they feel about the different salaries different employees are paid within the different pay grades.
These questions are important because the company will be able to make changes that will ensure that employees work with devotion. The research will also shield the company from legal suits. These are suits that may arise from employees or workers unions as a result of working conditions like sexual abuse.
The research will use descriptive research design. This is because questions to be used will be in a yes or no basis (Salkind 189). Only few questions will need a short explanation. The research will use questionnaires to sample data (Cochran 26).
The research is expected to determine if the rights of the employees of Green Technologies are upheld and respected. It will also help determine if the pay rates in the company are acceptable. Depending on the findings it will give recommendations to the human resource manager of Green Technologies.
Works Cited
Worth Richard. Workers’ Rights. New York: Marshall Cavendish, 2007.Print.
Martin John. Human Resource Management. Los Angeles: Sage, 2008. Print.
Salkind Neil. Encyclopedia of Research Design, Volume 1. Los Angeles: Sage, 2010. Print.
Cochran William. Sampling Techniques 3rd Edition. New Delhi: Wiley India PVT. 2007. Print. Read More
Share:
Tags
Cite this document
(“Equal pay and work rights Research Proposal Example | Topics and Well Written Essays - 250 words”, n.d.)
Equal pay and work rights Research Proposal Example | Topics and Well Written Essays - 250 words. Retrieved from https://studentshare.org/management/1615823-equal-pay-and-work-rights

CHECK THESE SAMPLES OF Equal pay and work rights

...), prohibits employers from paying unequal wages, based on gender”. The Equal Pay Act was passed by the congress in 1963 in which it was declared that men and women should receive equal pays for the same level of jobs. The act was passed in order to protect women right to get equal pays. The sole purpose of this act was to eradicate the element of gender-based discrimination from the work environment of American companies. Under this act, a female employee can make a claim by providing the evidence of not getting equal pay for working in...
12 Pages(3000 words)Research Paper

All Animal Rights Are Equal

...?All Animals are Equal Peter Singer’s article argues that animals are equal to humans and should be treated as such. He compares the animal liberation movement to the gender and racial equality movements. Referencing a work of satire by philosopher Thomas Taylor, Singer argues that, like past movements for equal rights for women and equal rights for African-Americans, animals should be given similar equal rights as well because the arguments for the rights of animals and the arguments for the rights of gender & race are the virtually the...
3 Pages(750 words)Essay

...Running Head: EQUAL PAY ACT Background of the Act According to Meiners and others, the 1963’s Equal Pay Act was established as the first of its kind of law and its focus was on discrimination in the context of employment. The Act prohibits the discrimination of wages on sex basis. In the Act it is held that it is against the Federal law to pay women and men workers different wages in a situation where a job calls for equal effort, skill, responsibility as well as same conditions of work. Under this Act, Job totles stand irrelevant; the content of the Job is reviewed. However, the Act on Equal...
4 Pages(1000 words)Essay

Equal Rights for All

.... They have to get attached to men who will look after their affairs. Women, no doubt, are weaker sex but only physically. They have been surrendered for psychological weakness also. They never think of dominating the males due to subdued behavior. ‘Equal rights for all’ is very important for me personally because I strongly favor the rights for women which they deserve. They must have opportunities as decision makers in important niches of the society. They must be able to direct their lives independently from men. Their prime roles as mothers of the generation shouldn’t be negated either. There must be a proper work-life balance for leading an ideal life as woman....
4 Pages(1000 words)Essay

... Teacher The cases cited that women could not own a property, had no legal rights to their wages, discouraged to work under the pain of being fired or forced resignation, working while doing domestic work may be an exaggeration today in the United States because it is no longer the case of most women but this illustrates the inequality that women had to bear and to some extent, are still facing today. There are some advocates on how to address this inequality such as Goldman’s contraception and economic independence and Kollontai’s suggestion that the state should provide childcare support to the women to alleviate their hardship and allow them to pursue their professional careers. I particularly agree with Kollontai’s assertion... . For...
1 Pages(250 words)Assignment

..., it was essential for the government to take steps to ensure that the continued pay discrimination against one half of the labor force was brought to an end; hence the passing of the Equal Pay Act by Congress. Purpose The Equal Pay Act was enacted to ensure that all men and women win the workforce would be guaranteed equal pay for equal work. It was further enacted to make sure that individuals in the workplace, especially women, were not discriminated against as a result of their sex when being paid and this ensured that the government recognized the value of women in the labor market....
18 Pages(4500 words)Thesis

...environments limit themselves to specifics within the act. The act tends to force cultures of disparities and create a level ground in the working spaces. The current ignore the essence of equal pay and embark in personal philosophies. The social spaces need to embrace cultures of tolerance and embark in activities that portray equity. The Equal Pay Act has been operational for many years but societies and institution tend to improvise models that jeopardize the provisions of the Equal Pay rights. Literature Review The private sector and the government need to apply the full provisions of the...
10 Pages(2500 words)Research Paper
sponsored ads
Save Your Time for More Important Things
Let us write or edit the research proposal on your topic "Equal pay and work rights" with a personal 20% discount.
GRAB THE BEST PAPER

Let us find you another Research Proposal on topic Equal pay and work rights for FREE!