Comments (0)
Add to wishlistDelete from wishlist
Cite this document
Summary
Herbert et al (2011) implies that the board should not only look for internal successor but also it should look for external individuals who are qualified. Based on his wide experience as senior vice president of operations, Bob Bowers should replace Ritter…
Download full paperFile format: .doc, available for editing
HIDE THIS PAPERGRAB THE BEST PAPER94.6% of users find it useful 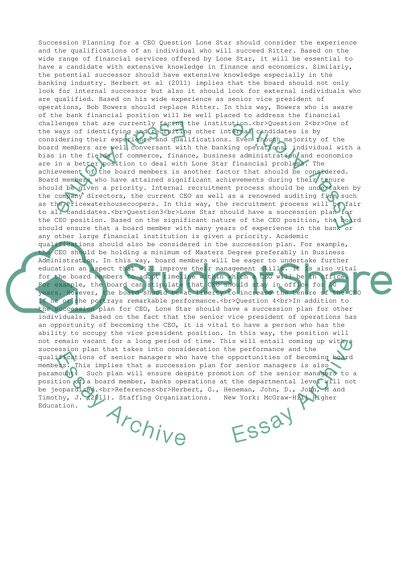 Extract of sample "Succession Planning for a CEO"

Succession Planning for a CEO Question Lone Star should consider the experience and the qualifications of an individual who will succeed Ritter. Based on the wide range of financial services offered by Lone Star, it will be essential to have a candidate with extensive knowledge in finance and economics. Similarly, the potential successor should have extensive knowledge especially in the banking industry. Herbert et al (2011) implies that the board should not only look for internal successor but also it should look for external individuals who are qualified. Based on his wide experience as senior vice president of operations, Bob Bowers should replace Ritter. In this way, Bowers who is aware of the bank financial position will be well placed to address the financial challenges that are currently facing the institution.
Question 2
One of the ways of identifying and recruiting other internal candidates is by considering their experience and qualifications. Even though majority of the board members are well conversant with the banking operations, individual with a bias in the fields of commerce, finance, business administration and economics are in a better position to deal with Lone Star financial problems. The achievement of the board members is another factor that should be considered. Board members who have attained significant achievements during their tenure should be given a priority. Internal recruitment process should be undertaken by the company directors, the current CEO as well as a renowned auditing firm such as the Pricewaterhousecoopers. In this way, the recruitment process will be fair to all candidates.
Question3
Lone Star should have a succession plan for the CEO position. Based on the significant nature of the CEO position, the board should ensure that a board member with many years of experience in the bank or any other large financial institution is given a priority. Academic qualifications should also be considered in the succession plan. For example, the CEO should be holding a minimum of Masters Degree preferably in Business Administration. In this way, board members will be eager to undertake further education an aspect that will improve their management skills. It is also vital for the board members to adopt timeline within which a CEO will be in office. For example, the board can stipulate that CEO should stay in office for 10 years. However, the board should be at liberty to increase the tenure of the CEO if he or she portrays remarkable performance.
Question 4
In addition to the succession plan for CEO, Lone Star should have a succession plan for other individuals. Based on the fact that the senior vice president of operations has an opportunity of becoming the CEO, it is vital to have a person who has the ability to occupy the vice president position. In this way, the position will not remain vacant for a long period of time. This will entail coming up with a succession plan that takes into consideration the performance and the qualifications of senior managers who have the opportunities of becoming board members. This implies that a succession plan for senior managers is also paramount. Such plan will ensure despite promotion of the senior managers to a position of a board member, banks operations at the departmental level will not be jeopardized.
References
Herbert, G., Heneman, John, D., John, M and Timothy, J. (2011). Staffing Organizations. New York: McGraw-Hill Higher Education. Read More
Share:
Tags
Cite this document
(“Succession Planning for a CEO Essay Example | Topics and Well Written Essays - 500 words”, n.d.)
Succession Planning for a CEO Essay Example | Topics and Well Written Essays - 500 words. Retrieved from https://studentshare.org/management/1615385-succession-planning-for-a-ceo

CHECK THESE SAMPLES OF Succession Planning for a CEO

The Concept of the Perfect Lady Created by Gallimard in Butterfly

Chanel and the Little Black Dress

...Succession Planning Table of Contents Introduction Succession is an important activity in any company. With the average age of the employees going up, it is quite normal to find a larger percentage of people nearing the retirement age. The succession and succession planning is different from the way replacement plan is done normally. While the replacement plan is to ensure that there is only one vacancy which needs to be filled up, in case of a succession it is a planned movement of the entire set of people below the level where vacancy is found albeit only one person is moved. Succession planning is not only planning for a replacement but also for overall talent management strategy. While aging of the staff is major contributor... to the...
21 Pages(5250 words)Research Paper

Succession Planning in the Peri-Operative Setting

...Succession Planning in perioperative Setting This proposal is aimed at implementing a succession plan for the retiring nurses by identifying and preparing appropriate individuals via training, coaching and mentoring to replace main organizational leaders. The objective is to develop training programs that identify, develop, motivate and transition trained nurses to fill up the available positions left by the retiring nurses. This objective is informed by the fact that, the future of nursing depends on the training that enables nurses to be leaders of change in advancing health. 2) The type of study to be done The type of study is an evaluation study into the...
2 Pages(500 words)Thesis Proposal

...1. How would a competency-based approach help the situation? This is a large company with over 15,000 employees spread all over the globe. This implies that employees come from different cultural background and values and hence their perceptions of a situation would differ. Because of global presence, complexities vary across nations. Thus replacement charts for succession planning is no solution for an organization of this size because this is not future-oriented. What is required is a broader focus and the objectives be aligned with business goals. Thus it is essential to differentiate successful employees from those who are not and this can be done through a competency-based approach....
4 Pages(1000 words)Essay

Changes in Leadership and CEO Succession

...Succession Planning In A.C Milan Introduction This paper opens with a background of the at A.C Milan soccer team. The essay will indicate the major milestones and the franchise roles. The paper presents a discussion about the successes and failures and the role of major sports soccer teams in succession planning. This will be followed by a description of the methods engaged in SP. The paper concludes with an evaluation of the effectiveness of succession planning methods and a conclusion of their impact to soccer team The Background Associazione Calcio Milan is popular as A.C. Milan. The soccer club is a professional Italian football soccer team with roots in Milan, Lombardy. The soccer team plays in Series A league. A.C. Milan... player,...
12 Pages(3000 words)Research Paper

...of succession policy within the organization. In addition, to accepting the extension of his tenure, the CEO and the other management staff came up with emergency back up for their positions. This article discusses major benefits of succession planning. First, it creates readiness of nonprofits organizations during the time of leadership transition. In this way, the services of the organizations are not disrupted and value for customers is not jeopardized. Secondly, Succession Planning ensures that management has a good picture of the competencies possessed by their leaders. Thirdly, it ensures managers are retained and acts as a...
4 Pages(1000 words)Coursework
sponsored ads
Save Your Time for More Important Things
Let us write or edit the essay on your topic "Succession Planning for a CEO" with a personal 20% discount.
GRAB THE BEST PAPER

Let us find you another Essay on topic Succession Planning for a CEO for FREE!