The impact of social media on arab spring - Essay Example

Comments (0)
Add to wishlistDelete from wishlist
Cite this document
Summary
Dejoe (2009) describes that the introduction of social networks improved better ways of interacting with one another and, therefore, taking people to another level that no one…
Download full paperFile format: .doc, available for editing
HIDE THIS PAPERGRAB THE BEST PAPER92.6% of users find it useful 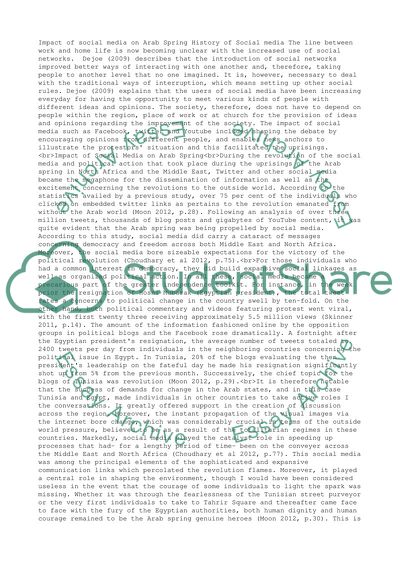 Extract of sample "The impact of social media on arab spring"

...because they knew that their messages and videos, uploaded to YouTube, which could be seen abroad and the worldwide media among others (Till, 2011). Consequently, the elements of globalization turned out to be decisive in inflicting a final blow to the cruel political systems prevailing in the Arab world. Social media, Mayfield (2008) asserts, could be stated as a group of new kinds of online media, which share the characteristics including participation, openness, conversation, community and connectedness, and brings the like-minded people closer to one another through its platform. Before embarking upon the topic under analysis, it would be advisable...
7 Pages(1750 words)Research Paper

...Arab Spring Arab spring Introduction The Arab spring being witnessed in Middle East is changing the political strategy or plan of the region as it is said to persist for decades to come. Not taking into consideration domestic developments, the Arab spring is unearthing long standing anarchism and authoritarian regimes, protagonist and antagonists to the west similarly and establishing a vacuum that regional powers will want to fill. The regional powers in Middle East such as Saudi Arabia, Iran, Israel, Egypt, Libya and Syria are poised to manipulate the uprising for their own good. This paper attempts to explain the Arab spring in relation to politics, religion, culture and business. Political and Arab spring Political Islamism... is...
2 Pages(500 words)Essay

The effect of social media on Arab spring

...The Effect of Social Media on Arab Spring Social media tools have revolutionized the world to the extent that nothing can exist in isolation. This paper sets out to portray the immense impact and effects that social media bear in the global society. In a special way, the discussion highlights the Egyptian and Tunisian episodes of the Arab Spring. Introduction Social media such as Facebook, Twitter, YouTube, Flickr, and MySpace have a profound effect on culture and community. Social...
6 Pages(1500 words)Research Proposal

... Section/# Arab Spring: Egypt The regime of Hosni Mubarak was one that had lasted for nearly 30 years. Accordingly,the power structure within Egypt at the time that the Arab Spring took place was one in which one individual and his security forces directed nearly every action that the state took. Such an undemocratic process had defined Egyptian politics long before even Mubarak had come to power however. As a result of the corruption and the knowledge that Mubarak was likely to hand his power to his son, thereby creating a type of dynasty, the unease and dissatisfaction among those living in Egypt reached a boiling point and instigated what has become to be known as the Arab Spring. This brief analysis essay will compare some... of the...
2 Pages(500 words)Essay

...Did social media have a big impact in the Bahraini uprising during the Arab spring? Hassan AL Khalifa ENG12 Lisa Erickson Date: 2/9/2014 Introduction The Bahraini uprising is a subject close to me in different ways with the first one being my origins in the Saudi Arabia, which is in the Middle East. The Middle East has been the center of democratic revolts in the recent past with citizens rising against oppressive regimes in the region. Although, I did not and have not participated in any of the uprisings witnessed in the Middle East, the Bahraini uprising has been involving owing to the friends and relatives who live in the country. Remarkably, I have...
4 Pages(1000 words)Essay

...Annotated Bibliography Arab Spring Summary: In this article “Arab Spring Uprising” the Manfreda mentioned some facts about what happened in the Middle East. First he started with Tunisia and the story of Mohammed Bouazizi. The writer believes that the most important reasons for the protest were the death of Bouazizi. He also said the Arab Spring impact on the Middle East. He divided his topic for eight sections; he said each country in one separate paragraph. Starting with what happened in Tunisia, ending by Jordan. Evaluation: This source was useful because it provided insight of what happened in the Middle...
2 Pages(500 words)Annotated Bibliography

...that the local convention media was muzzled. It is however not adequate on its own. Manuel Castel emphasized the role of BBC, Al Jazeera, Al Hiwar, France 24 and other television stations in presenting Arab Spring news. He states that Al Jazeera had conducted information collection disseminated in the cyber space, organized it and retransmitted it as free news to numerous mobile phones owners. Thus, a new system was born that incorporated an interactive mobile, television, internet and radio communication systems for mass communication. Obviously, the insurgery was not conceived by the communication communications. The rebellion came to be due to social exclusion and...
7 Pages(1750 words)Research Paper

...provided the spark that prompted the revolution in the Middle East and Northern Africa. Some, however, have argued that social media played a major role in causing and making the Arab Spring a successful revolution. Those who argue on this basis note that revolutions had exhibited similarities in social media in these countries as a strategy before the revolt erupted and even during the revolution. They further argued that the activists across these uprisings used social media sites such as Twitter and Facebook to spread calls for protests in public squares. To an extent, these claims can be considered...
6 Pages(1500 words)Essay

... where it took place in North Africa and the Middle East (Botelho). However, this has not been the case four years on. Each country has seemingly chosen to write it’s on narrative or history (Lesch & Haas 10). Some countries such as Jordan where it took place have managed to institute political, social, and economic reforms while others such as Syria, Lybia, and Yemen, have endeared themselves to an endless state of violence, unrest, and even civil wars (BBC). A look at how the ‘Arab spring’ affected each of the countries it took place reveals the differing political, social, and economic impacts it has had on them (Dabashi 34). Works Cited BBC. How the Arab Spring began. 16 December 2011. 20 April 2015
1 Pages(250 words)Essay
sponsored ads
Save Your Time for More Important Things
Let us write or edit the essay on your topic "The impact of social media on arab spring" with a personal 20% discount.
GRAB THE BEST PAPER

Let us find you another Essay on topic The impact of social media on arab spring for FREE!