Comments (0)
Add to wishlistDelete from wishlist
Cite this document
Summary
It achieves this by exploring relationships between variables to a situation with the aim of developing a contributing theory. This paper explores research articles on application of virtual…
Download full paperFile format: .doc, available for editing
HIDE THIS PAPERGRAB THE BEST PAPER98.8% of users find it useful 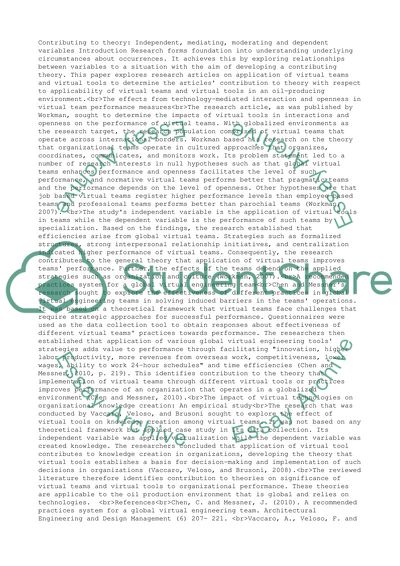 Contributing to theory: Independent, mediating, moderating and dependent variables Introduction Research forms foundation into understanding underlying circumstances about occurrences. It achieves this by exploring relationships between variables to a situation with the aim of developing a contributing theory. This paper explores research articles on application of virtual teams and virtual tools to determine the articles’ contribution to theory with respect to applicability of virtual teams and virtual tools in an oil-producing environment.
The effects from technology-mediated interaction and openness in virtual team performance measures
The research article, as was published by Workman, sought to determine the impacts of virtual tools in interactions and openness on the performance of virtual teams. With globalized environments as the research target, the research population comprised of virtual teams that operate across international borders. Workman based his research on the theory that organizational teams operate in cultured approaches that organizes, coordinates, communicates, and monitors work. Its problem statement led to a number of research interests in null hypotheses such as that global virtual teams enhances performance and openness facilitates the level of such performance, and normative virtual teams performs better that pragmatic teams and the performance depends on the level of openness. Other hypotheses are that job based virtual teams register higher performance levels than employee-based teams and professional teams performs better than parochial teams (Workman, 2007).
The study’s independent variable is the application of virtual tools in teams while the dependent variable is the performance of such teams by specialization. Based on the findings, the research established that efficiencies arise from global virtual teams. Strategies such as formalized structures, strong interpersonal relationship initiatives, and centralization indicated higher performance of virtual teams. Consequently, the research contributes to the general theory that application of virtual teams improves teams’ performance. Further, the effects of the teams depend on the applied strategies such as organization and culture (Workman, 2007).
A recommended practices system for a global virtual engineering team
Chen and Messner’s research sought to explore the effectiveness of different practices in global virtual engineering teams in solving induced barriers in the teams’ operations. It was based on a theoretical framework that virtual teams face challenges that require strategic approaches for successful performance. Questionnaires were used as the data collection tool to obtain responses about effectiveness of different virtual teams’ practices towards performance. The researchers then established that application of various global virtual engineering tools’ strategies adds value to performance through facilitating “innovation, higher labor productivity, more revenues from overseas work, competitiveness, lower wages, ability to work 24-hour schedules” and time efficiencies (Chen and Messner, 2010, p. 219). This identifies contribution to the theory that implementation of virtual teams through different virtual tools or practices improves performance of an organization that operates in a globalized environment (Chen and Messner, 2010).
The impact of virtual technologies on organizational knowledge creation: An empirical study
The research that was conducted by Vaccaro, Veloso, and Brusoni sought to explore the effect of virtual tools on knowledge creation among virtual teams. It was not based on any theoretical framework but applied case study in its data collection. Its independent variable was applied virtualization while the dependent variable was created knowledge. The researchers concluded that application of virtual tool contributes to knowledge creation in organizations, developing the theory that virtual tools establishes a basis for decision-making and implementation of such decisions in organizations (Vaccaro, Veloso, and Brusoni, 2008).
The reviewed literature therefore identifies contribution to theories on significance of virtual teams and virtual tools to organizational performance. These theories are applicable to the oil production environment that is global and relies on technologies.
References
Chen, C. and Messner, J. (2010). A recommended practices system for a global virtual engineering team. Architectural Engineering and Design Management (6) 207- 221.
Vaccaro, A., Veloso, F. and Brusoni, S. (2008). The impact of virtual technologies on organizational knowledge creation: An empirical study. Proceedings of the 41st Hawaii International Conference on System Science
Workman, M. (2007). The effects from technology-mediated interaction and openness in virtual team performance measures. Behavior and information technology (26.5) 355- 365. Read More
Share:
Tags
Cite this document
(“Contributing to Theory: Independent, Mediating, Moderating, and Statistics Project”, n.d.)
Contributing to Theory: Independent, Mediating, Moderating, and Statistics Project. Retrieved from https://studentshare.org/management/1604149-contributing-to-theory-independent-mediating-moderating-and-dependent-variables

CHECK THESE SAMPLES OF Contributing to Theory: Independent, Mediating, Moderating, and Dependent Variables

...?Moderating and Minimizing Conflict Conflict is a situation in which two or more people realize that they have incompatible objectives due to which they think that they are unable to go along with one another (Himes, 2008). Some conflicts are little that are resolved in no time with a little communication (Cahn & Abigail, 2007); while, some are big enough that a mediation plan is needed to resolve them. Strasser and Randolph (2004, p.3) assert that “conflict is an intrinsic characteristic of the human species in every society, irrespective of geographic, ethnic or religious origin.” No matter how much man has made progress in understanding human behavior, yet he is unable to fully describe conflict and...
3 Pages(750 words)Essay

...? Contributing to Theory: Independent, Mediating, Moderating and Dependent Variables Crime in society is perpetrated by individuals who are under the influence of a myriad of factors both at an individual and societal level. Attributes of crime are varied depending on its nature and complexity. Either crime perpetrators carry out theses acts willingly and knowingly or are unaware they are committing crimes and breaking the law. The society that people live in creates situations where people are predisposed to criminal acts, but most crimes are instigated by the need for money. This because without money...
7 Pages(1750 words)Essay

...with illegal aspects that land people in jail. There are various independent (IV), dependent variables (DV), mediating and moderating variables that have been the subject of research studies regarding their influence on employment and crime (Fairchild & Mackinnon, 2009). A key construct in the journal article ‘Reentry and the Ties that Bind: An Examination of Social Ties, Employment and Recidivism’, are the social ties of an offender reentering society (Berg & Huebner, 2011). Researchers in this study found out that offenders who maintained social ties with their families and obtained steady work were less likely to recidivate (Berg &...
12 Pages(3000 words)Research Proposal

...Confounding Variables Scenario chosen: Scenario h An elementary school teacher wants to show that parents’ involvement helps their children learn. She randomly chooses one half of the boys and one half of the girls in her class and sends a note home with them. The note asks the parents to spend more time each day working with the child on his or her math homework. The other half of the children do not receive a note. At the end of the school year, the teacher finds that the children whose parents she sent notes to have significantly better final math grades. Why can’t the researcher conclude that parental involvement increased the students’ scores? Confounding variable that could be present: 1....
1 Pages(250 words)Essay

...-like in shape and also possess thick cell wall. 4. How do these lists of bacteria you identified in Question 3 compare with the list we compiled through culture dependent and culture independent identification techniques in Project 3? Why might our list of bacteria be different from theirs? It is evident that the above described bacteria are also found under the culture dependent bacteria techniques. The list might vary because the culture independent bacteria require the use of complicated media to copy the conditions found at the site of isolation or the employment of co-culture approaches (Snedden, 2000 p. 15). 5. Describe 2 advantages that 16s rRNA sequencing has...
2 Pages(500 words)Lab Report

...inches long. Such a relationship is a positive correlation because the two variables change in a similar direction. As the height of the individual increases, so does the height. A negative correlation manifests where the variables proceed in opposite directions. An example to this can involve the absence of a student from class and his/her performance. When a student misses classes, the performance or grades are likely to drop. The variables compared in a correlation are known as an independent and dependent variables. The change of the independent variable is beyond human control. An example to this is...
1 Pages(250 words)Essay

Influence on the dependent variables

...Control of Extraneous Variables Control of Extraneous Variables Any research conducted, normally focuses on two kinds of variables, the dependent and the independent. The central idea of the researcher is to manipulate the independent variable so as to induce some response measured by the dependent variable. However, in any given research there are other numerous variables that constantly change. Such variable are named as the extraneous variables, and it is the duty of the researcher to deal with these variable so that they cannot turn into confounding variables (Houser, 2014). If the extraneous variables turn into confounding variables, they can influence the validity of the research findings thus the researcher needs to come... up with...
1 Pages(250 words)Essay
sponsored ads
Save Your Time for More Important Things
Let us write or edit the statistics project on your topic "Contributing to Theory: Independent, Mediating, Moderating, and Dependent Variables" with a personal 20% discount.
GRAB THE BEST PAPER

Let us find you another Statistics Project on topic Contributing to Theory: Independent, Mediating, Moderating, and Dependent Variables for FREE!