Comments (0)
Add to wishlistDelete from wishlist
Cite this document
Summary
The author of this essay entitled "Facebook vs Twitter" touches upon analysis of Facebook with specific reference to the website’s mission statement. It is mentioned that a SWOT analysis will be performed to identify the potential threat facing Facebook…
Download full paperFile format: .doc, available for editing
HIDE THIS PAPERGRAB THE BEST PAPER93.2% of users find it useful 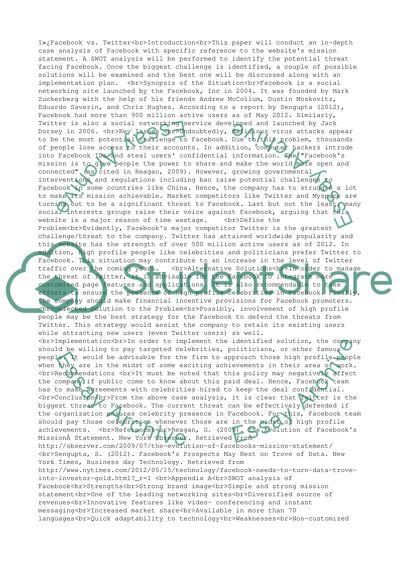 ﻿Facebook vs. Twitter
Introduction
This paper will conduct an in-depth case analysis of Facebook with specific reference to the website’s mission statement. A SWOT analysis will be performed to identify the potential threat facing Facebook. Once the biggest challenge is identified, a couple of possible solutions will be examined and the best one will be discussed along with an implementation plan.
Synopsis of the Situation
Facebook is a social networking site launched by the Facebook, Inc in 2004. It was founded by Mark Zuckerberg with the help of his friends Andrew McCollum, Dustin Moskovitz, Eduardo Saverin, and Chris Hughes. According to a report by Sengupta (2012), Facebook had more than 900 million active users as of May 2012. Similarly, Twitter is also a social networking service developed and launched by Jack Dorsey in 2006.
Key Issues
Undoubtedly, malicious virus attacks appear to be the most potential challenge to Facebook. Due to this problem, thousands of people lose access to their accounts. In addition, computer hackers intrude into Facebook IDs and steal users’ confidential information. The “Facebook’s mission is to give people the power to share and make the world more open and connected” (as cited in Reagan, 2009). However, growing governmental interventions and regulations including ban raise potential challenges to Facebook in some countries like China. Hence, the company has to struggle a lot to make its mission achievable. Market competitors like Twitter and Myspace are turning out to be a significant threat to Facebook. Last but not the least, many social interests groups raise their voice against Facebook, arguing that this website is a major reason of time wastage.
Define the Problem
Evidently, Facebook’s major competitor Twitter is the greatest challenge/threat to the company. Twitter has attained worldwide popularity and this website has the strength of over 500 million active users as of 2012. In addition, high profile people like celebrities and politicians prefer Twitter to Facebook. This situation may contribute to an increase in the level of Twitter traffic over the coming years.
Alternative Solutions
In order to manage the threat of Twitter, it is advisable for the Facebook to integrate more customized page features and applications. It is also recommendable to take efforts to ensure the presence of high profile celebrities in Facebook. Finally, the company should make financial incentive provisions for Facebook promoters.
Selected Solution to the Problem
Possibly, involvement of high profile people may be the best strategy for the Facebook to defend the threats from Twitter. This strategy would assist the company to retain its existing users while attracting new users (even Twitter users) as well.
Implementation
In order to implement the identified solution, the company should be willing to pay targeted celebrities, politicians, or other famous people. It would be advisable for the firm to approach those high profile people when they are in the midst of some exciting achievements in their area of work.
Recommendations
It must be noted that this policy may negatively affect the company if public come to know about this paid deal. Hence, Facebook team has to make agreements with celebrities hired to keep the deal confidential.
Conclusion
From the above case analysis, it is clear that Twitter is the biggest threat to Facebook. The current threat can be effectively defended if the organization ensures celebrity presence in Facebook. For this, Facebook team should pay those celebrities whenever those are in the midst of high profile achievements.
References
Reagan, G. (2009). The Evolution of Facebook’s Mission Statement. New York Observer. Retrieved from http://observer.com/2009/07/the-evolution-of-facebooks-mission-statement/
Sengupta, S. (2012). Facebook’s Prospects May Rest on Trove of Data. New York Times, Business day Technology. Retrieved from http://www.nytimes.com/2012/05/15/technology/facebook-needs-to-turn-data-trove-into-investor-gold.html?_r=1
Appendix A
SWOT analysis of Facebook
Strengths
Strong brand image
Simple and strong mission statement
One of the leading networking sites
Diversified source of revenues
Innovative features like video- conferencing and instant messaging
Increased market share
Available in more than 70 languages
Quick adaptability to technology
Weaknesses
Non-customized page features
FAQ’s are used instead of giving proper feedbacks
Major reason of time wastage
Irrelevant applications
Opportunities
Act as a potential platform for inexpensive sales promotion
Scope for inexpensive and easy surveys and polls
Applications become a major source of income
Infinite scope for international expansion
Threats
Increased threat of virus attacks
Competitors like Twitter, Hi5, and Myspace
Leakage of photos and other information
Government regulations
Hackers
Cultural disintegration
(Source: Facebook vs. Twitter: The Coming Facebook-Twitter Collision) Read More
Share:
Tags
Cite this document
(“Facebook vs Twitter Case Study Example | Topics and Well Written Essays - 500 words”, n.d.)
Facebook vs Twitter Case Study Example | Topics and Well Written Essays - 500 words. Retrieved from https://studentshare.org/management/1599926-case-analysis-of-the-mission-statement-facebook-vs-twitter

...? Facebook (Add (Add (Add Facebook Introduction Two of the most leading social networking sites, Facebook and Twitter have been chosen for this study. The purpose of Facebook is to assist people to keep in touch with their friends, share their thoughts, and publish pictures and videos. Facebook’s home screen displays the message “Facebook helps you connect and share with the people in your life”. The purpose of Twitter is almost similar to that of Facebook. The main purpose of twitter is simply to create and build relationships among people worldwide. Contents of...
4 Pages(1000 words)Essay

...? “How social media affects children today” Social media has emerged as the biggest prevailing technology in our society. It has transformed children’s lives by connecting each other through social media networks such as Facebook, twitter, Instagram, MySpace etc. (Clinton and Steyer n.p.). Statistical analysis shows that 7.5 million kids join Facebook before they are even 13 years old, which is a contradiction to the requirement for joining. This results in the presence of their online histories, pictures and personal information etc. on such social media websites at mere age of 5 or 7 (Clinton and Steyer n.p.). They also switch to using smartphones when they are only of age 2-4 years...
6 Pages(1500 words)Essay

... outlet. Oftentimes, Twitter and Facebook are used simultaneously and the end result is an individual that gains a certain level of utility from both of these services, their similarities, and their unique differences. References Matt, K., & USA, T. (n.d). Twitter and all things tech. USA Today. Romeo, P. (2011). Facebook social media 50. (cover story). Restaurant Business, 110(4), 23-36. Tagtmeier, C. (2010). Facebook vs. Twitter: battle of the social network stars. Computers In Libraries, 30(7), 6-10.... of how one of these sites is necessarily better than the other, the following analysis will engage the reader with a realization for the way in which both Facebook and Twitter differentiate from one...
4 Pages(1000 words)Essay

...Twitter The 21st century has witnessed an infusion of digital technology that has reshaped the cultural landscape. Within this spectrum of understanding one of the most pervasive developments have been in the realm of social networking. Websites such as Facebook have gained millions of followers and have changed the contemporary cultural landscape. Another prominent networking site that has gained widespread popularity in recent years is Twitter. After debuting in 2006 Twitter has grown rapidly and now enjoys nearly 200 million users. This essay examines Twitter in terms of early history, development, and modern development. Twitter...
2 Pages(500 words)Essay

...Evaluating Facebook’s and Twitter’s Mission ments Mission ments are terse ments that quickly explain to the reader why an organizationexists or the organisation’s overall purpose. In a way, they also provide a general view of what the organization is currently doing. This means that, by omission, one could also argue that the mission statement also states what the organisation does not do. In this paper we shall evaluate the mission statements of two popular social networking sites: Facebook and Twitter. The paper seeks to find out which of these two missions has greater potential to serve as an energy source and rallying point for the organization to the extent that it...
2 Pages(500 words)Essay

... Module Sample topic, Working Thesis and Source List Topic: Cyberbullying on Twitter Working Thesis: In the past, bullying was confined to the walls of educational institutions but with the advancement of technology and the rise of social media such as twitter, a new form of intimidation and domineering called cyberbullying has emerged in the society. Potential Sources: Aldridge, Gemma. "Beth Tweddle cyberbullied by Twitter trolls who called her Pig Ugly And Lord Voldermort in web chat." mirror. N.p., 11 Feb. 2014. Web. 10 Apr. 2014.
1 Pages(250 words)Research Proposal

.... It is not always easy to come up with a conclusion of which among the two is better than the other. The main determinant is the purpose. If you want to keep up with family and friends and ensure privacy, Facebook is your thing. On the other hand, if you are more interested with what is happening globally, Twitter should be your social network choice. Twitter in comparison to Facebook requires a lot of creativity from its uses. For someone to get more followers, you have to be creative, funny and informative. Contrary in Facebook, the number of friends depends on how many requests you approve and the people you request. Works Cited Brock, T....
4 Pages(1000 words)Essay

...they can constantly speak out anything they want and this would be read by someone. Another interesting aspect of Twitter usage in modern world was noted by Aviva Cuyler in the article “Social Networking: Leveraging Twitter, Linkedh, and Facebook”, the author claims that Twitter is one of those social media that make it easy not only freely communicate with other people, but also easily find right people for communication (20). Thus if a person wants to talk to somebody on any matter, one can go on Twitter and find thousands of tweets from other people on the topic one needs. Using such things as hashtags and retweets, it is very simple to find out what...
7 Pages(1750 words)Research Paper

...provides much more diverse functions which is why, its users are far more in number than those of Twitter. Both websites have unique approaches to social networking. While Facebook is more meant for common man without being restricted to common man alone, Twitter is much more of a political platform for well-known personalities, but again, without being limited to them. Twitter can diversify its functions and features in order to get closer to Facebook in terms of use and revenue. 6 References: Bennett, S 2013, Facebook Vs Twitter: Revenue, Users, Average Time Spent, Key Mobile Data [STATS], SocialTimes,...
4 Pages(1000 words)Essay
sponsored ads
Save Your Time for More Important Things
Let us write or edit the case study on your topic "Facebook vs Twitter" with a personal 20% discount.
GRAB THE BEST PAPER