The Assortment of Products in ACT II - Case Study Example

Comments (0)
Add to wishlistDelete from wishlist
Cite this document
Summary
This paper focuses on the assortment of products in ACT II, which is a company that mainly deals with producing edible products. According to the company’s outlined recipe, and standards it’s the best in the market given its wide range of flavors in handy…
Download full paperFile format: .doc, available for editing
HIDE THIS PAPERGRAB THE BEST PAPER94.5% of users find it useful 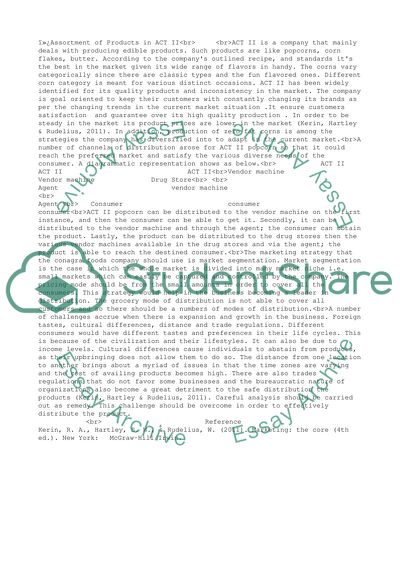 Extract of sample "The Assortment of Products in ACT II"

﻿Assortment of Products in ACT II

ACT II is a company that mainly deals with producing edible products. Such products are like popcorns, corn flakes, butter. According to the company’s outlined recipe, and standards it’s the best in the market given its wide range of flavors in handy. The corns vary categorically since there are classic types and the fun flavored ones. Different corn category is meant for various distinct occasions. ACT II has been widely identified for its quality products and inconsistency in the market. The company is goal oriented to keep their customers with constantly changing its brands as per the changing trends in the current market situation .It ensure customers satisfaction and guarantee over its high quality production . In order to be steady in the market its product prices are lower in the market (Kerin, Hartley & Rudelius, 2011). In addition, production of zero fat corns is among the strategies the company has diversified into to adapt in the current market.
A number of channels of distribution arose for ACT II popcorn so that it could reach the preferred market and satisfy the various diverse needs of the consumer. A diagrammatic representation shows as below.
ACT II ACT II ACT II
Vendor machine Vendor machine Drug Store

Agent vendor machine
Agent
Consumer consumer consumer
ACT II popcorn can be distributed to the vendor machine on the first instance, and then the consumer can be able to get it. Secondly, it can be distributed to the vendor machine and through the agent; the consumer can obtain the product. Lastly, the product can be distributed to the drug stores then the various vendor machines available in the drug stores and via the agent; the product is able to reach the destined consumer.
The marketing strategy that the conagra foods company should use is market segmentation. Market segmentation is the case in which the whole market is divided into many market niche i.e. small markets which can easily be captured and controlled by the company. The pricing mode should be from the small amounts in order to cover all the consumers. This strategy would help in the business becoming a leader in distribution. The grocery mode of distribution is not able to cover all customers and so there should be a numbers of modes of distribution.
A number of challenges accrue when there is expansion and growth in the business. Foreign tastes, cultural differences, distance and trade regulations. Different consumers would have different tastes and preferences in their life cycles. This is because of the civilization and their lifestyles. It can also be due to income levels. Cultural differences cause individuals to abstain from products, as their upbringing does not allow them to do so. The distance from one location to another brings about a myriad of issues in that the time zones are varying and the cost of availing products becomes high. There are also trades regulations that do not favor some businesses and the bureaucratic nature of organizations also become a great detriment to the safe distribution the products (Kerin, Hartley & Rudelius, 2011). Careful analysis should be carried out as remedy. This challenge should be overcome in order to effectively distribute the product.
Reference Kerin, R. A., Hartley, S. W., & Rudelius, W. (2011). Marketing: the core (4th ed.). New York: McGraw-Hill/Irwin. Read More
Share:
Tags
Cite this document
(“The Assortment of Products in ACT II Case Study Example | Topics and Well Written Essays - 500 words”, n.d.)
Retrieved from https://studentshare.org/management/1595741-case-study-act-ii

CHECK THESE SAMPLES OF The Assortment of Products in ACT II

...? The Patriot Act, Tittle II, Section 203 This paper looks into the Patriot Act in details. Over a decade ago, after the 9/11 attacks, Congress passed the U.S.A. Patriot Act with an aim of improving the effectiveness of the US investigatory tools. The passage of the Act by the congress was almost unanimous in order to arm the intelligence service with effective tools to detect and combat terrorism. Title II of the initial Patriot Act (“enhanced surveillance procedures”) has the essential amendments made on a number of laws in order to boost the effectiveness of investigative procedures. These improvements on the Title...
10 Pages(2500 words)Term Paper

...?American products vs foreign products Introduction: In the contemporary age, America stands first in the list of advanced and developed economies. This paper draws a comparison between cars and eatables made in America and in other parts of the world. Cars: About 63 million light trucks and cars were produced in 2005 all over the world. of these, 11524000 were produced by America, 5543000 were produced by Germany, and 10064000 were produced by Japan (Tarlo, 2006). It may come as a surprise to many but it is true that a lot of vehicles made in America are designated like “foreign” whereas a lot of vehicles produced in Canada or Mexico are considered “domestic”. This can fundamentally be attributed to the requirement of the federal...
2 Pages(500 words)Essay

...?Continuing Marketing Plan BERVET is a Company that mainly deals with manufacture of alcohol. Over a period the company has managed to expand itself in such a way that; it is able to serve more people from different markets. The company mainly aims at meeting the key needs of its customers through alcohol sale. Since the company faces a lot of competition from other companies, it is forced to market its products very effectively in order to capture the attention of its customers (Hartley & Hartley, 2008). Customers need to be given a reason for purchasing in a certain company and not in another one. On the other hand, the company also ensures that its product is of high quality in order for other consumers to purchase its products... as...
4 Pages(1000 words)Assignment

...? Marketing Products Product Discussion and Its Primary Characteristics Trendy Fashionista is a young and a fashion oriented company. It is primarily based in the United States. As the name suggests, the company favors fashion to a very large extent and strives to reflect the essence of fashion in almost every product that it manufactures. The company presently is looking forward to cater to the fast moving young individuals who are always in a hurry and ponder for special luggage bag that is light in weight, attractive yet comfortable to carry. The company intends for producing a luggage bags because it will be new concept for the company as the company will be producing it for the first time. The company will produce bags... that will be...
4 Pages(1000 words)Essay

..., and other in-store media that direct consumers to buy a particular product (Wells et al 37-38). These six promotional mix factors sometimes run independently yet concurrently, which is fine if that is the intention. In an ideal promotion marketing scenario, all six factors would operate together. Thus, critics admit that traditional ways to promote do not always work: innovation is needed. Consumers and people in general have never been able to discuss their own motivations, because they do not understand them. Nor do they think about them, which is why this part of the mind is referred to as the unconscious. But although consumers do not think about their motives, they do experience them and they do...
5 Pages(1250 words)Essay

...Othello Act 2 The scene is at a sea port in Cyprus, in an open place by the quay side. 2. The ship bearing Michael Cassio is the first to arrivefrom Venice. 3. The ship bearing Iago, Emilia, Roderigo and Desdemona is the second one to arrive from Venice. 4. Desdemona speaks up when Emilia is quiet, and answers back to Iago. They must be friends, since she takes the liberty of joking with Emilia’s husband Iago. Emilia seems tired of Iago’s clever talk, but Desdemona teases him and calls him a slanderer. The two women operate as a team in this conversation, countering Iago’s slanderous views on women. 5. Iago wants Roderigo to anger Cassio because Roderigo is not known to Cassio, and this is a way of meddling in the life...
2 Pages(500 words)Essay

...COUNTERFEIT PRODUCTS Introduction The world is growing every day with the demand of everyone also increasing. This demand has often created a lot of issues. The world of business has often woken up to some saddening news bulletin that many a times have left the mouths of many wide open. There is the growing concern of every that many imitational products have fields the markets. This is therefore considered one of the greatest challenges of both local and international business. Counterfeit products and the health There is growth in the counterfeit products production with many second and third world countries becoming the main target of these illegal...
5 Pages(1250 words)Term Paper

...Marketing Services versus Products – Part II Total Number of Words: 444 Response to John Perez To market products and services, John mentioned that both service and product can be customized such that products are physically configured whereas services are customized in the form of service delivery (Perreault, Cannon, & McCarthy, 2014). A good example of product customization includes giving the customers the option to decide on what interior design and electronic gadget to include in their desired car model. A good example of service customization is the guided tour. Depending where the tourists would want to go, travel agencies can arrange for a guided tour that will satisfy the tourists’ expectations. Other similarities... and...
1 Pages(250 words)Assignment

...– products perceived variety. Such an assortment offer consumers four items: i. The consumer can enjoy most of the brands in that assortmentii. The consumer can get at least one option from that assortment that he/she likes iii. The assortment offers the consumer more ways to enjoy it iv. How much variety the consumer thinks there is in that assortment Another factor that a marketer should consider is ‘perceive complexity.’ The perceived variety at the assortment level may be positive, but it can become a liability if it results in confusion or decreased satisfaction due to choice overload....
14 Pages(3500 words)Essay
sponsored ads
Save Your Time for More Important Things
Let us write or edit the case study on your topic "The Assortment of Products in ACT II" with a personal 20% discount.
GRAB THE BEST PAPER

Let us find you another Case Study on topic The Assortment of Products in ACT II for FREE!