Comments (0)
Add to wishlistDelete from wishlist
Cite this document
Summary
The statistics reveal that San Antonio has exhibited robust growth in their municipality as evidenced from the positive outlook generated by the relevant factors, such as the property values, the employment base, the low cost of living, surplus operations and level of reserves…
Download full paperFile format: .doc, available for editing
HIDE THIS PAPERGRAB THE BEST PAPER97.3% of users find it useful 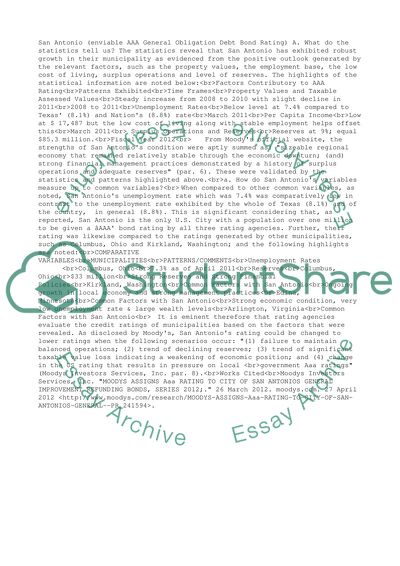 San Antonio (enviable AAA General Obligation Debt Bond Rating) A. What do the statistics tell us? The statistics reveal that San Antonio has exhibited robust growth in their municipality as evidenced from the positive outlook generated by the relevant factors, such as the property values, the employment base, the low cost of living, surplus operations and level of reserves. The highlights of the statistical information are noted below:
Factors Contributory to AAA Rating
Patterns Exhibited
Time Frames
Property Values and Taxable Assessed Values
Steady increase from 2008 to 2010 with slight decline in 2011
2008 to 2011
Unemployment Rates
Below level at 7.4% compared to Texas’ (8.1%) and Nation’s (8.8%) rate
March 2011
Per Capita Income
Low at $ 17,487 but the low cost of living along with stable employment helps offset this
March 2011
Surplus Operations and Reserves
Reserves at 9%; equal $85.3 million.
Fiscal Year 2012
From Moody’s official website, the strengths of San Antonio’s condition were aptly summed as: “sizeable regional economy that remained relatively stable through the economic downturn; (and) strong financial management practices demonstrated by a history of surplus operations and adequate reserves” (par. 6). These were validated by the statistics and patterns highlighted above.
a. How do San Antonio’s variables measure up to common variables?
When compared to other common variables, as noted, San Antonio’s unemployment rate which was 7.4% was comparatively low in contrast to the unemployment rate exhibited by the whole of Texas (8.1%) and of the country, in general (8.8%). This is significant considering that, as reported, San Antonio is the only U.S. City with a population over one million to be given a ‘AAA’ bond rating by all three rating agencies. Further, their rating was likewise compared to the ratings generated by other municipalities, such as Columbus, Ohio and Kirkland, Washington; and the following highlights are noted:
COMPARATIVE VARIABLES
MUNICIPALITIES
PATTERNS/COMMENTS
Unemployment Rates
Columbus, Ohio
7.3% as of April 2011
Reserves
Columbus, Ohio
$33 million
Strong Reserves and Strong Financial Policies
Kirkland, Washington
Common Factors with San Antonio
Ongoing growth in local economy and strong management practices
Edina, Minnesota
Common Factors with San Antonio
Strong economic condition, very low unemployment rate & large wealth levels
Arlington, Virginia
Common Factors with San Antonio
It is eminent therefore that rating agencies evaluate the credit ratings of municipalities based on the factors that were revealed. As disclosed by Moody’s, San Antonio’s rating could be changed to lower ratings when the following scenarios occur: “(1) failure to maintain balanced operations; (2) trend of declining reserves; (3) trend of significant taxable value loss indicating a weakening of economic position; and (4) change in the US rating that results in pressure on local
government Aaa ratings” (Moodys Investors Services, Inc. par. 8).
Works Cited
Moodys Investors Services, Inc. "MOODYS ASSIGNS Aaa RATING TO CITY OF SAN ANTONIOS GENERAL IMPROVEMENT REFUNDING BONDS, SERIES 2012;." 26 March 2012. moodys.com. 27 April 2012 . Read More
Share:
Tags
Cite this document
(“San Antonio (enviable AAA General Obligation Debt Bond Rating ) Case Study”, n.d.)
San Antonio (enviable AAA General Obligation Debt Bond Rating ) Case Study. Retrieved from https://studentshare.org/management/1595473-san-antonio-enviable-aaa-general-obligation-debt-bond-rating

Financial Administration in the City of San Antonio TX

...? Financial Administration Number Financial Administration Budgeting in the of San AntonioTX is done by the office of Management and Budgeting. It is meant to act as a financial guide, a policy paper and a financial plan (Maria, 2011). The city of San Antonio TX budget is well formulated and executed. The budget presents an adequate overview of the entity and its financial position. This is so because it provides a summary of all the budget components, its allocation and the role of these components in enhancing the objectives of the city. The budget summary covers the element of public safety, where the police and the fire department of the city are committed to respond to the safety needs of the city residents. The budget seeks... and...
10 Pages(2500 words)Essay

...The newscast I watched was fox 51 news at nine in the night.. The news was anchored by Kris Betts, the main anchor, scotChester, who presented the weather and Danny Elzner who presented the sports of the day. The date of the news was December, 12th, 2012. The news generally focused on the family, crime and sports. The first segment of the news focused on the family and then went on to crimes committed by certain people during the day. The sports focused on the NFL teams that were yet to play and were preparing for their matches. The news started with the marriages that were happening during the day, and it was a foregone conclusion that the day was unique in engaging in marriages. As it was a memorable day. Most of those...
4 Pages(1000 words)Research Paper

Effect of Debt Limit/Debate on Credit Rating of US

...’ confidence in all government held assets. The Federal default could be disruptive to global financial markets and this cause the municipal market to be swept in the wreckage. Interest rates for municipal bonds have historically been tied to treasury securities closely and if the Federal government defaults, the borrowers of municipal debts would be affected by higher borrowing costs and an access to credit that is limited. United States downgrade would prompt review of local and states credit. United States default would thus make the municipal debt to be more attractive as the investors will search for assets that are attractive to replace the treasuries assets....
8 Pages(2000 words)Research Paper

...Economic development in San Antonio TX Summary Management of Budget of San Antonio TX is the responsibility of the Office of Management and Budget. The prepared budget acts as a communication device and as an operations guide for this city. The budget is also applied as a financial plan and a policy document. It acts as a tool through which the city allocates its resources towards quality service delivery, investment and the city’s maintenance and improvement (Emily, 46). The city’s budget is prepared in such a way that it enhances the most crucial services of the public. Background Information The city of San Antonio’s economy is based...
4 Pages(1000 words)Case Study

...bond rated Baa will bear higher interest rate than a municipal bond rated Aa.This is because, according to Moody’s rating ,a bond rated Aa has shows that credit worthiness of the issuer is high hence the issuer will have to pay less interest on the debt being issued, as opposed to a municipal bond rated Baa which are judged to be of medium grade and subject to moderate credit risk, meaning that credit worthiness of the issuer is somewhat good, but not as good as that of the one rated Aa.Municipalities with lower bond...
1 Pages(250 words)Assignment

...San Antonio After having experienced several years of succeeding indigenous cultures, Payaya Indians had t coalesce as people. As such, they lived adjacent to the San Antonio River Valley. A Spanish explorer (Cabeza de Vaca) visited the area that was later named Texas in 1536. This led to the emergence of several expeditions on the Texas region by majority of the Spanish. These expeditions focused on the possibility of establishing settlements in this region. Fray Antonio was the most significant contributor towards these expeditions who encouraged authorities to focus on establishment of missions in San Antonio River....
1 Pages(250 words)Essay

Critically evaluates the process of global harmonisation of financial reporting

.... In addition, SAFB has an outreach program that is composed of 30 member outreach team. The outreach team conduct the role of aiding in the application for over six federal assistance programs present in the 16 county areas of operations. To this end, the general staff from SAFB process over 2,000 applications monthly. The San Antonio Food Bank has been credited with the most efficient leadership and management staff. Evidently, the organization’s charity policy ensures that 98 cents accruing from each donated dollar is directed into the programs. Fund Development Due to the fact that San Antonio Food Bank is a non for profit organization, most of its...
10 Pages(2500 words)Case Study
sponsored ads
Save Your Time for More Important Things
Let us write or edit the case study on your topic "San Antonio (enviable AAA General Obligation Debt Bond Rating )" with a personal 20% discount.
GRAB THE BEST PAPER