Comments (0)
Add to wishlistDelete from wishlist
Cite this document
Summary
When West Jet implemented the Sabre-Sonic and went live with this new system in October 2009, its potential customers were in a struggle to place reservations. Consequently, the West Jet Website crashed continuously. Its call centers were overwhelmed as well, and there were…
Download full paperFile format: .doc, available for editing
HIDE THIS PAPERGRAB THE BEST PAPER96.4% of users find it useful 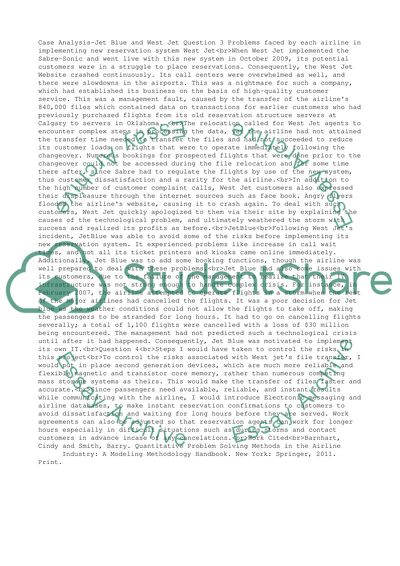 Case Analysis-Jet Blue and West Jet Question 3 Problems faced by each airline in implementing new reservation system West Jet
When West Jet implemented the Sabre-Sonic and went live with this new system in October 2009, its potential customers were in a struggle to place reservations. Consequently, the West Jet Website crashed continuously. Its call centers were overwhelmed as well, and there were slowdowns in the airports. This was a nightmare for such a company, which had established its business on the basis of high-quality customer service. This was a management fault, caused by the transfer of the airline’s 840,000 files which contained data on transactions for earlier customers who had previously purchased flights from its old reservation structure servers at Calgary to servers in Oklahoma.
The relocation called for West Jet agents to encounter complex steps in processing the data, yet the airline had not attained the transfer time needed to transfer the files and had not succeeded to reduce its customer loads on flights that were to operate immediately following the changeover. Numerous bookings for prospected flights that were done prior to the changeover could not be accessed during the file relocation and for some time there after, since Sabre had to regulate the flights by use of the new system, thus customer dissatisfaction and a rarity for the airline.
In addition to the high number of customer complaint calls, West Jet customers also expressed their displeasure through the internet sources such as face book. Angry flyers flooded the airline’s website, causing it to crash again. To deal with such customers, West Jet quickly apologized to them via their site by explaining the causes of the technological problem, and ultimately weathered the storm with success and realized its profits as before.
JetBlue
Following West Jet’s incident, JetBlue was able to avoid some of the risks before implementing its new reservation system. It experienced problems like increase in call wait times, and not all its ticket printers and kiosks came online immediately. Additionally, Jet Blue was to add some booking functions, though the airline was well prepared to deal with these problems.
Jet Blue had also some issues with its customers, due to the failure of the management to realize that their IT infrastructure was not strong enough to handle complex crisis. For instance, in February 2007, the airline attempted to operate flights in a storm when the rest of the major airlines had cancelled the flights. It was a poor decision for Jet blue as the weather conditions could not allow the flights to take off, making the passengers to be stranded for long hours. It had to go on cancelling flights severally; a total of 1,100 flights were cancelled with a loss of $30 million being encountered. The management had not predicted such a technological crisis until after it had happened. Consequently, Jet Blue was motivated to implement its own IT.
Question 4
Steps I would have taken to control the risks in this project
To control the risks associated with West jet’s file transfer, I would put in place second generation devices, which are much more reliable and flexible magnetic and transistor core memory, rather than numerous competing mass storage systems as theirs. This would make the transfer of files faster and accurate.
Since passengers need available, reliable, and instant results while communicating with the airline, I would introduce Electronic messaging and airline databases, to make instant reservation confirmations to customers to avoid dissatisfaction and waiting for long hours before they are served. Work agreements can also be adjusted so that reservation agents can work for longer hours especially in difficult situations such as during storms and contact customers in advance incase of any cancelations.
Work Cited
Barnhart, Cindy and Smith, Barry. Quantitative Problem Solving Methods in the Airline Industry: A Modeling Methodology Handbook. New York: Springer, 2011. Print. Read More
Share:
Tags
Cite this document
(“Case Analysis-Jet Blue and WestJet Essay Example | Topics and Well Written Essays - 500 words”, n.d.)
Case Analysis-Jet Blue and WestJet Essay Example | Topics and Well Written Essays - 500 words. Retrieved from https://studentshare.org/management/1595013-case-analysis-jet-blue-and-westjet

CHECK THESE SAMPLES OF Case Analysis-Jet Blue and WestJet

...﻿Jet Blue Airways In a competitive market, for a provider to be successful they would need to have an edge above competitors. This edge is acquired by either offering a good or a service that others do not offer; offering the same goods or services as they do but differently; or by offering value added services that competitors do not offer. In a volatile market however, flexibility to changing situations is even more important than all other competitive strategies as it ensures that the business in question will adapt more easily to market fluctuations without unnecessary and avoidable losses. Trends in the US airline industry and their impact to company strategies The US airline industry was undergoing many and varied changes... ...
4 Pages(1000 words)Case Study

Principal Powers available to the courts in England & Wales

...Summary of the case Ann Rhoades the executive vice president is thinking about the very exciting start up year. Jet Blues service from 9 departures per day had increased to 50 per day in 11months the fleet had grown from 2 planes to 10 new planes every year through the end of 2003 bringing the fleet count to a 40. The jet blue teams had grown from 10 to a 1000 and with the arrival of each new plane a 100 more recruitment were expected and so within 4 years the employment was to increase to 5000. Ann Rhoades had gained experience and skill to overcome new challenges while she was working with the south west airlines as a Human resource head .She recognized...
4 Pages(1000 words)Case Study

...Jet Blue Part One What is the most important problem facing Jet Blue The most important problem that Jet Blue is facing is their ability to sustain their enormous growth in the industry. Jet Blue started operations in 1999 following Southwest's low cost solution but with value added in-flight features. After the 9/11 attacks, Jet Blue was one of those few airlines that managed to remain profitable. Banking on the success of initial years, Jet Blue expanded its services, destinations and airplanes to provide its travelers more travelling...
4 Pages(1000 words)Assignment

...around America. JetBlue has also partnered with Blue’s Clues, Nickelodeon, The American Cancer Society and First Book to promote charity and awareness in JetBlue’s major cities. The JetBlue challenge is a program set up by JetBlue and Colana Sports Group to create golf tournaments for companies to generate revenue while promoting JetBlue. It’s a self-proclaimed “one-Stop shop” for companies looking to promote through golf tournaments. But it doesn’t stop there: the website outlines A cooperative strategy that seems incredibly diverse and also includes a CEO outreach program, a “Jetting to Green” program that creates a JetBlue and Carbonfund.org partnership, a “JetPaws” program that offers a pet...
5 Pages(1250 words)Essay

...Jet Blue History JetBlue Airways Corporation was formed in August 1998 as a low-fare, low-cost, but high service passenger airline serving select US markets. The company flew point to point service between destinations and serviced a combination of short and long haul markets. JetBlue was founded by David Neeleman, a veteran in the low-fare airline industry, who was backed by a group of private equity firms, led by Weston Presidio. The initial investors in JetBlue provided a total of $175 million in start-up equity capital. JetBlue began flying in February 2000, and in April 2002, the company completed its IPO raising an additional $158 million. The company’s shares performed well since the IPO due to...
5 Pages(1250 words)Essay

...Business February 16, Essay Analysis of an entrepreneur: JetBlue Airways Background Jet Blue Airways started operations in year 1999. From a small beginning, the airline has grown to become the nation’s sixth biggest airline by passenger capacity. The company championed over rivals as it revolutionized the budget fare concept of air travel. While it is a copied strategy, JetBlue added value and introduced new strategies in its operation. Where its major competitors failed, JetBlue remained profitable even during crisis time. It drives its success from its innovativeness, expertise of its management team and its financial strength. Although it is considered a budget fare airlines it...
2 Pages(500 words)Essay

...Blue jet Affiliation: Strengths JetBlue has and continues to have an innovative approach to business which means it is open minded to new ideas that will continue its unnamed motto of lower costs and good service. Cut down on unnecessary expenses which do not add any value to customers but end up increasing the budget such as serving food as opposed to providing only snacks which are cheaper in the long run and keep customers happy and full. More amenities have been offered increasing the services and outdoing even the premium airlines at less cost. Such amenities which have attracted more customers include personalized television with over 20 channels as well as leather seats which are wide and have more leg allowance. Reduced...
4 Pages(1000 words)Case Study

...JETBLUE CASE STUDY Low-cost airlines are one of the components of the U.S. tourism industry, which entered the market in 1978 and are now popular as no- frills, discount and budget carrier which typically offer low fares in exchange for eliminating all other traditional services (Baker, 2013). However, to remain competitive, these services should provide good quality to their customers through collaborative efforts of employees, management and all other stakeholders. In fact, customers’ satisfaction depends greatly on the interaction between them and employees; hence, it is worth mentioning about the vital role of employees within low-cost services. In this case, it is necessary to analyze human resource...
7 Pages(1750 words)Essay

...levels. The earnings are also correlated with fuel prices. Jet blue has diverse opportunities. The company has the potential of expanding into new and existing markets and the higher margin services have typically attracted travelers. Competition from other airlines and the risk of geographic situation are among the main threats that jet blue faces. While the risks and high prices of fuel are present, the positives seem to outweigh the negatives in the context of jet blue airlines. Given a bright outlook, price appreciation could be seen by investors. Due to the success of the expansion plan of the company, an appeal for long-term...
1 Pages(250 words)Essay
sponsored ads
Save Your Time for More Important Things
Let us write or edit the essay on your topic "Case Analysis-Jet Blue and WestJet" with a personal 20% discount.
GRAB THE BEST PAPER

Let us find you another Essay on topic Case Analysis-Jet Blue and WestJet for FREE!