Comments (0)
Add to wishlistDelete from wishlist
Cite this document
Summary
This paper under the headline "Aircraft Makers, Lessors Split on Market Outlook, by Robert Wall " focuses on the fact that in the past, overbooking of Airbus and Boeings were satisfied by used aircraft in circumstances where new aircraft were not available. …
Download full paperFile format: .doc, available for editing
HIDE THIS PAPERGRAB THE BEST PAPER94.4% of users find it useful 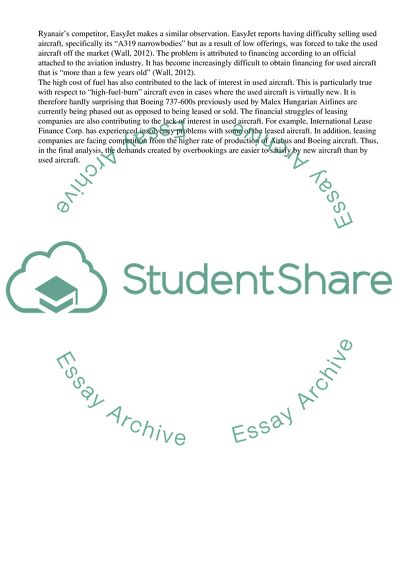 Ryanair’s competitor, EasyJet makes a similar observation. EasyJet reports having difficulty selling used aircraft, specifically its “A319 narrowbodies” but as a result of low offerings, was forced to take the used aircraft off the market (Wall, 2012). The problem is attributed to financing according to an official attached to the aviation industry. It has become increasingly difficult to obtain financing for used aircraft that is “more than a few years old” (Wall, 2012).
The high cost of fuel has also contributed to the lack of interest in used aircraft. This is particularly true with respect to “high-fuel-burn” aircraft even in cases where the used aircraft is virtually new. It is therefore hardly surprising that Boeing 737-600s previously used by Malex Hungarian Airlines are currently being phased out as opposed to being leased or sold. The financial struggles of leasing companies are also contributing to the lack of interest in used aircraft. For example, International Lease Finance Corp. has experienced insolvency problems with some of the leased aircraft. In addition, leasing companies are facing competition from the higher rate of production of Airbus and Boeing aircraft. Thus, in the final analysis, the demands created by overbookings are easier to satisfy by new aircraft than by used aircraft.
Read More
Share:
Tags
Cite this document
(Aircraft Makers, Lessors Split on Market Outlook, by Robert Wall Article, n.d.)
Aircraft Makers, Lessors Split on Market Outlook, by Robert Wall Article. Retrieved from https://studentshare.org/management/1594801-current-article-related-to-international-aviation-management-course

The True Legacy of Robert Mugabe

The rest of the essay is an attempt at making an objective assessment of the Mugabe regime in particular and post-colonial Zimbabwean history in general. In doing so, we shall understand the true legacy of Robert Mugabe.
It has to be stated in the outset that Mugabe’s image of a cruel dictator is not accepted everywhere. It is the Western media which portrays him in this fashion, for various reasons. But within the fraternity of African nations, he is held in high regard and at times even seen as an African hero. While condemning Mugabe’s regime for its blatant human rights violations, the Western media often overlooks the broader historical context, namely that of centuries-long British imperialism. To illustrate...
9 Pages(2250 words)Case Study

Toyota's Position on the Market

Finally, the paper will end with a conclusion based on the analysis of the above-mentioned sections as presented in this report.
Toyota Motors is a Japan-based automobile producer and assembler of top quality vehicles that have received wide worldwide consumer acceptance and popularity. Toyota has been operating in both developed / advance countries (the US and Europe) and emerging economies (including China, India, in African, Middle East, and Latin America) so that it could cater to a large pool of (willing and able) customers in these economies. The major products offered by Toyota are Camry, Lexus, Prado, Prius, and many others, etc. Toyota claims that its products are safe, secure, reliable, comfortable, durable and hass...
8 Pages(2000 words)Case Study

﻿Great Lakes
I. Major Facts
Great Lakes Carriers currently has a capacity issue for diversifying into bulk freight, which would require retrofitting of the bulk carriers to accommodate new container delivering, something not achievable under the current business model. GLC has also visited many ports on the Great Lakes and determined that demand has reduced for grain and iron freight shipments and is forecasted to continue this downward slide. Further, if the business were to select this diversification strategy, how to establish better competitive advantage is a legitimate concern as it relates to pricing and the operational model. Finally, there would be capacity issues imposed by seaway regulations associated with allowa...
2 Pages(500 words)Case Study
sponsored ads
Save Your Time for More Important Things
Let us write or edit the article on your topic "Aircraft Makers, Lessors Split on Market Outlook, by Robert Wall" with a personal 20% discount.
GRAB THE BEST PAPER

Let us find you another Article on topic Aircraft Makers, Lessors Split on Market Outlook, by Robert Wall for FREE!