Comments (0)
Add to wishlistDelete from wishlist
Cite this document
Summary
Conflicts can be between members of staff or even between members of staff and the management. There can also be individual conflicts and group conlicts.However, the most important thing is…
Download full paperFile format: .doc, available for editing
HIDE THIS PAPERGRAB THE BEST PAPER94.7% of users find it useful 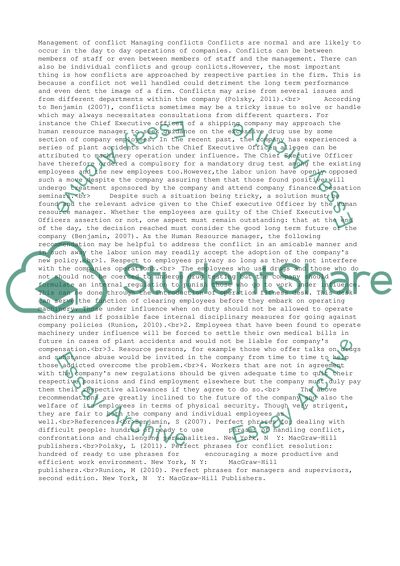 Management of conflict Managing conflicts Conflicts are normal and are likely to occur in the day to day operations of companies. Conflicts can be between members of staff or even between members of staff and the management. There can also be individual conflicts and group conlicts.However, the most important thing is how conflicts are approached by respective parties in the firm. This is because a conflict not well handled could detriment the long term performance and even dent the image of a firm. Conflicts may arise from several issues and from different departments within the company (Polsky, 2011).
According to Benjamin (2007), conflicts sometimes may be a tricky issue to solve or handle which may always necessitates consultations from different quarters. For instance the Chief Executive officer of a shipping company may approach the human resource manager to seek guidance on the excessive drug use by some section of company employees. In the recent past, the company has experienced a series of plant accidents which the Chief Executive Officer alleges can be attributed to machinery operation under influence. The Chief Executive Officer have therefore ordered a compulsory for a mandatory drug test among the existing employees and the new employees too.However,the labor union have openly opposed such a move despite the company assuring them that those found positive will undergo treatment sponsored by the company and attend company financed cessation seminars.
Despite such a situation being tricky, a solution must be found and the relevant advice given to the Chief executive Officer by the Human resource manager. Whether the employees are guilty of the Chief Executive Officers assertion or not, one aspect must remain outstanding: that at the end of the day, the decision reached must consider the good long term future of the company (Benjamin, 2007). As the Human Resource manager, the following recommendation may be helpful to address the conflict in an amicable manner and in such away the labor union may readily accept the adoption of the company’s new policy.
1. Respect to employees privacy so long as they do not interfere with the companies operations.
The employees who use drugs and those who do not should not be coerced to undergo drug testing but the company should formulate an internal regulation to punish those who go to work under influence. This can be done through the introduction of operation fitness desk. This desk can serve the function of clearing employees before they embark on operating machinery. Those under influence when on duty should not be allowed to operate machinery and if possible face internal disciplinary measures for going against company policies (Runion, 2010).
2. Employees that have been found to operate machinery under influence will be forced to settle their own medical bills in future in cases of plant accidents and would not be liable for company’s compensation.
3. Resource persons, for example those who offer talks on drugs and substance abuse would be invited in the company from time to time to help those addicted overcome the problem.
4. Workers that are not in agreement with the company’s new regulations should be given adequate time to quit their respective positions and find employment elsewhere but the company must duly pay them their respective allowances if they agree to do so.
The above recommendations are greatly inclined to the future of the company and also the welfare of its employees in terms of physical security. Though very strigent, they are fair to both the company and individual employees as well.
References.
Benjamin, S (2007). Perfect phrases for dealing with difficult people: hundred of ready to use phrases of handling conflict, confrontations and challenging personalities. New York, N Y: MacGraw-Hill publishers.
Polsky, L (2011). Perfect phrases for conflict resolution: hundred of ready to use phrases for encouraging a more productive and efficient work environment. New York, N Y: MacGraw-Hill publishers.
Runion, M (2010). Perfect phrases for managers and supervisors, second edition. New York, N Y: MacGraw-Hill Publishers. Read More
Share:
Tags
Cite this document
(“Managing Conflict Essay Example | Topics and Well Written Essays - 500 words”, n.d.)
Retrieved from https://studentshare.org/management/1593809-managing-conflict

CHECK THESE SAMPLES OF Managing Conflict

...?Role of Leader in Managing Conflict Introduction Conflict is inevitable in any organization but it can be solved amicably depending on the leader’s capability and interpersonal skills for conflict resolution. It is also important to explain the meaning of conflict as a way of gaining a clear understanding of the interpersonal skills that are considered to be important in solving conflicts. A conflict is an active disagreement between people with different opinions, values or interests (Kleynhans, 2007). Conflict can be on individual basis or group conflict where a group of people are...
8 Pages(2000 words)Essay

...? Managing Conflict in Interpersonal Communication Showing Grace Grace refers to granting forgiveness or putting aside our own needs when there is no standard that compels us to do so. It entails putting aside our desires or helping others save face in an event of a wrong doing. For example, a junior worker who messes up with office work and doesn’t want to acknowledge the mistake can be pardoned by the boss as a demonstration of showing grace. Grace is an important part of spiritual and philosophical reasoning about ethical dimensions of human communication. This may not be common to all individuals because of the differences in our beliefs but truly speaking, granting pardon to an individual can really...
3 Pages(750 words)Essay

Animals for testing the safety of products

...Managing Conflict & the Negotiation Process Conflicts may come in various nature and in differing levels and time. They may be big or small, intermittent, or chronic, or simply trivial. But conflicts are conflicts and each one is unique - just as are the approaches used to manage them. The most logical approach in managing conflicts is to frame it first, in order to understand what the conflict is all about and how it is going to be addressed. For example, is the conflict about interests, about needs, or about fairness Is it about trying to project a win-win solution...
4 Pages(1000 words)Assignment

...Presented by Presented to Lecturer LEARNING JOURNAL ON MANAGING CONFLICTS Conflicts result from disagreement between individuals or groups due to differences in their attitude, or modes of thinking. Interpersonal conflicts are very sensitive since they might lead to one of the party enduring a lot of sufferings because of the actions of the other person. According to Whetten and Cameron, an effective conflict management results when the prevailing disputes are resolved and not necessarily eliminating the problem (2010). Conflict management involves three steps, which include; problem diagnosis, selection...
2 Pages(500 words)Essay

...Conflict management affiliation Conflict management Departmental conflicts usually affect the overall performance of the company. Due to the diversity of employees in an organization, managers aim to uproot the conflicts in the departments (Mullins, 2005). In this scenario, the conflict arises from the difference in race and cultural beliefs. This kind of conflict usually needs caution when approaching it since the employees involved hold very strong religious and racial ties (Levine, 2005). In the upcoming departmental meetings, the issues of performance, freedom of speech and improving...
1 Pages(250 words)Essay

...Managing Conflict Managing Conflict The usual workplace consists of diversity. There are many people from different backgrounds and orientations functioning together to get the work done (Gountanis, n.d.). The diversity of individuals within a group is the catalyst for high growth, synergy of solutions and a variety of ideas. Thus conflict is inevitable in the workplace. Individuals as they come together in a working team bring with them their opinions, attitudes and values that differ from others. These are precursors of conflict but can be managed to not have a negative consequence resulting to disagreements...
1 Pages(250 words)Essay

Managing Conflict in the Workplace

...Managing Conflicts in the Workplace Managing Conflicts in the Workplace Introduction According to Brinkert , "Recognition ofconflict as normal makes it acceptable, arguably even obligatory, to directly address conflict and treat it as a significant matter" (p. 152). Each and every employee has his or her own diverse viewpoints or opinions when it comes to addressing issues in the workplace. As a result of this diversity therefore, conflicts are inevitable. It is important to assert that conflicts have the potential to negatively affect productivity in the workplace if not addressed properly. It is the obligation of the Nurse manager to deal with conflicts when they occur in an effective manner. This paper offers a brief overview... of a...
2 Pages(500 words)Term Paper

...Managing Conflict in Relationships Opening the conversation in more productively manner The onset of the conversation began by Ken speaking in an aggressive and a passive manner. Ken could have opened the conversation in a more productive way. The “you” language that Ken used assigned blame and seemed judgmental. He blamed her without giving her a chance to explain her side of the story (Wood, 2012). Before the conversation, Ken should have acknowledged to Jan that he feels her time is valuable. As he accused Jan of her actions, he also denied his wrong doings together with his feelings, in the conflict. He should have looked at a way to express his emotions before initiating the...
2 Pages(500 words)Assignment
sponsored ads
Save Your Time for More Important Things
Let us write or edit the essay on your topic "Managing Conflict" with a personal 20% discount.
GRAB THE BEST PAPER

Let us find you another Essay on topic Managing Conflict for FREE!