Comments (0)
Add to wishlistDelete from wishlist
Cite this document
Summary
The paper "Rolls-Royce Corporations Project Management Stakeholders" states that for the poor countries, creative financing schemes can be made available for them, like barter (part cash and part payment in kind, such as mining or agricultural commodities)…
Download full paperFile format: .doc, available for editing
HIDE THIS PAPERGRAB THE BEST PAPER97.4% of users find it useful 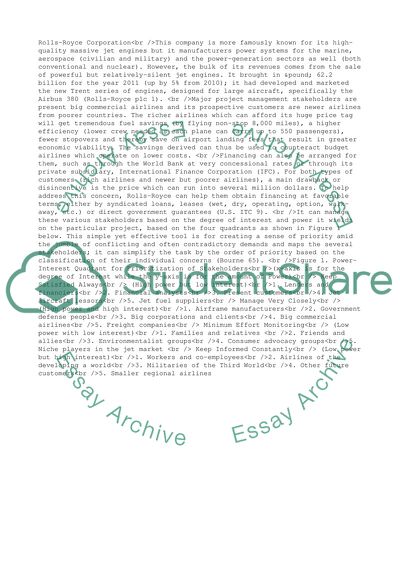 Rolls-Royce Corporation
This company is more famously known for its high-quality massive jet engines but it manufacturers power systems for the marine, aerospace (civilian and military) and the power-generation sectors as well (both conventional and nuclear). However, the bulk of its revenues comes from the sale of powerful but relatively-silent jet engines. It brought in £ 62.2 billion for the year 2011 (up by 5% from 2010); it had developed and marketed the new Trent series of engines, designed for large aircraft, specifically the Airbus 380 (Rolls-Royce plc 1).
Major project management stakeholders are present big commercial airlines and its prospective customers are newer airlines from poorer countries. The richer airlines which can afford its huge price tag will get tremendous fuel savings (by flying non-stop 8,000 miles), a higher efficiency (lower crew needed as each plane can carry up to 550 passengers), fewer stopovers and thereby save on airport landing fees that result in greater economic viability. The savings derived can thus be used to counteract budget airlines which operate on lower costs.
Financing can also be arranged for them, such as through the World Bank at very concessional rates or through its private subsidiary, International Finance Corporation (IFC). For both types of customers (rich airlines and newer but poorer airlines), a main drawback or disincentive is the price which can run into several million dollars. To help address this concern, Rolls-Royce can help them obtain financing at favorable terms, either by syndicated loans, leases (wet, dry, operating, option, walk-away, etc.) or direct government guarantees (U.S. ITC 9).
It can manage these various stakeholders based on the degree of interest and power it wields on the particular project, based on the four quadrants as shown in Figure 1 below. This simple yet effective tool is for creating a sense of priority amid the jumble of conflicting and often contradictory demands and maps the several stakeholders; it can simplify the task by the order of priority based on the classification of their individual concerns (Bourne 65).
Figure 1. Power-Interest Quadrant for Prioritization of Stakeholders
(x-axis is for the degree of Interest while the y-axis is for the amount of Power)
Keep Satisfied Always
(High power but low interest)
1. Lenders and financiers
2. Financial analysts
3. Present customers
4. Jet aircraft lessors
5. Jet fuel suppliers
Manage Very Closely
(High power and high interest)
1. Airframe manufacturers
2. Government defense people
3. Big corporations and clients
4. Big commercial airlines
5. Freight companies
Minimum Effort Monitoring
(Low power with low interest)
1. Families and relatives
2. Friends and allies
3. Environmentalist groups
4. Consumer advocacy groups
5. Niche players in the jet market
Keep Informed Constantly
(Low power but high interest)
1. Workers and co-employees
2. Airlines of the developing a world
3. Militaries of the Third World
4. Other future customers
5. Smaller regional airlines Read More
Share:
Tags
Cite this document
(Rolls-Royce Corporations Project Management Stakeholders Case Study, n.d.)
Rolls-Royce Corporations Project Management Stakeholders Case Study. Retrieved from https://studentshare.org/management/1591218-rolls-royce-corporation
(Rolls-Royce Corporations Project Management Stakeholders Case Study)
Rolls-Royce Corporations Project Management Stakeholders Case Study. https://studentshare.org/management/1591218-rolls-royce-corporation.
“Rolls-Royce Corporations Project Management Stakeholders Case Study”, n.d. https://studentshare.org/management/1591218-rolls-royce-corporation.
Comments (0)
Click to create a comment or rate a document

...reduced and would have affected the price. There can be some global reasons for the reduction in prices such as the global crises that the whole world is going through. The estimations applied in the calculation can also impact the results as estimations are expected to vary from the actual results and cause variances. Management’s under standard performances and low sales can also hit the share price of company (Rolls Royce 2010). Part 2 The global recession generally termed as Great Recession has created a strain in the markets worldwide. It had affected small companies heavily but large corporations like blue chip companies and wealthy businesspersons had the minimal...
12 Pages(3000 words)Essay

The financial ratios of Rolls Royce and its major competitors

.... Liquidity Ratios As far as liquidity ratios are concerned, three basic ratios are calculated namely as Current Ratio, Quick Ratio and Net Working Capital to Sales. In terms of Current ratio, Rolls Royce has outperformed among other industry participants by generating a Current Ratio of 1.37 which is the highest. Similar pattern can also be observed in terms of Quick Ratio where Rolls Royce is on a leading side with 1.03. Overall Net Working Capital to Sales Ratio of Rolls Royce is also far better than the other competitors with 23.87%. Thus it can be concluded that the Rolls Royce has effectively...
12 Pages(3000 words)Essay

...certifications and third party accreditations like ISO 14001 for its environmental management, its new facility at Seletar received the Green Mark (Platinum) award for having a reduced environmental footprint in construction, retains its Gold status with BitC Index for the extent to which corporate strategy is integrated into business practice and continues to be one of the leading companies in the Carbon Disclosure Project (CDP) Index. (ROLLS-ROYCE) People’s Development: Along with environmental and community support for sustainable development, RR has also maintained its focus internally by developing its people, promoting learning and training,...
10 Pages(2500 words)Essay

...to organizations. By virtue of their size, organizations have increased bargaining power to buyers and suppliers. GE uses corporate strategy to achieve this benefit. It can use its bargaining power to get competitive rates GE and Rolls Royce: Comparison Within a same industry, both GE and Rolls Royce cope with the same competitive pressures. Both the companies have to settle on as to how they would compete against each other and also against their competitors. In managing its portfolio of businesses, GE faces tactical issues that are less significant to Rolls Royce. Business strategy refers to the ways a...
10 Pages(2500 words)Essay

...of high power gas turbine engines which gained its prominence in the global cutthroat market due to its use of extremely advanced technologies. One of the main competitors of Rolls Royce PLC is GE Aviation. Other than GE Aviation, Aviation Industry Corporation of China, Siemens AG, Siemens Westinghouse Power Corporation, General Electric Power Systems among others are also close competitors of Rolls Royce PLC. Consequently, there is always an underlying risk of entry of new threats in the market of Rolls Royce. Thus, it can be stated that, it is highly challenging to sustain in the global competitive...
4 Pages(1000 words)Essay

Strengths and weaknesses of Rolls Royce

...payment is made for goods as well as its fixed expenses and other variables. This again has been stable for Rolls Royce with no sharp changes. This means that company understands its business very well and is very effective in managing it. The company has knows how to efficiently manage the various processes of its business (Pinson, 2008). Net Profit Margin Net Profit margin is the actual measure of a company’s financial success. Net profit margin indicates how profitable the company is. Therefore, higher the net profit margin more profitable the company is (Brigham & Houston, 2009). Rolls Royce’s performance with respect to net profit...
7 Pages(1750 words)Essay

...?Answer to Question No Rolls Royce is a company incorporated in the United Kingdom which was formed as a result of the partnership between CharlesStewart Rolls and Sir Frederick Henry Royce. The company is a renowned car manufacturing company, and since 1904 it started it’s another division of aero-engineering manufacturing. The aero-engineering is further divided between civil aerospace engineering and defense aero space engineering. In addition to these principal activities, the company also operates in marine and energy market. Answer to Question No. 2 The external independent auditors of the company, KPMG LLP, were appointed as auditor to give an opinion on the...
4 Pages(1000 words)Coursework

...authorities, suppliers, regulators. The project management has a responsibility to all these and must structure its objectives to give each a measure of satisfaction. Employees responsibilities, as internal stakeholders: "cut across many departments. Human resources focuses mainly on recruiting, pay and benefits, training programs, employee appraisal systems, and similar concerns affecting all jobholders" (Lamb, Mckee 2005 7) Once the stakeholder map has been constructed for the project, the competing agendas can be analyzed. If, for example, two highly influential stakeholders (i.e. in the high-high quadrant) agree on...
2 Pages(500 words)Essay

Rolls-Royce and the Stock Market

...engine were much higher than expected and led Rolls-Royce into bankruptcy in 1971 ("Rolls-Royce RB.211," 2005). Between changes in the Lockheed design and necessary redesign of the LB.211, cost became prohibitive, but Rolls-Royce was a company whose management philosophy was mainly based on engineering capabilities, not the marketplace, and this unfortunately led to failure (Lazonick and Principe, 2004). Rolls-Royce's bankruptcy was such an unexpected setback for Lockheed that it never really recovered. The engine that caused all the problems, renamed the Tri-Star, continued to be...
11 Pages(2750 words)Case Study

... become critical for the success, sustainability and profitability of the business in the current complex, dynamic and intensely competitive corporate world. The report is commenced discussing the background of the case company and by providing an overview of the company in the current scenario. This is followed by a review of the literary works prepared and published by scholars and academicians in the arena of operations management and operations strategy. The different theories and concepts related to operations strategy are then applied and related to the operations strategy and operations management done in Rolls Royce Plc. A section of the report is dedicated to the discussion of the strengths and weaknesses of the company... ...
10 Pages(2500 words)Coursework
sponsored ads
Save Your Time for More Important Things
Let us write or edit the case study on your topic "Rolls-Royce Corporations Project Management Stakeholders" with a personal 20% discount.
GRAB THE BEST PAPER

Let us find you another Case Study on topic Rolls-Royce Corporations Project Management Stakeholders for FREE!