Comments (0)
Add to wishlistDelete from wishlist
Cite this document
Summary
Collective bargaining “consists of negotiations between an employer and a group of employees so as to determine the conditions of employment”(Cornell University Law School, n.d.). The conditions of employment usually include among others, the wages, work hours and benefits…
Download full paperFile format: .doc, available for editing
HIDE THIS PAPERGRAB THE BEST PAPER96% of users find it useful 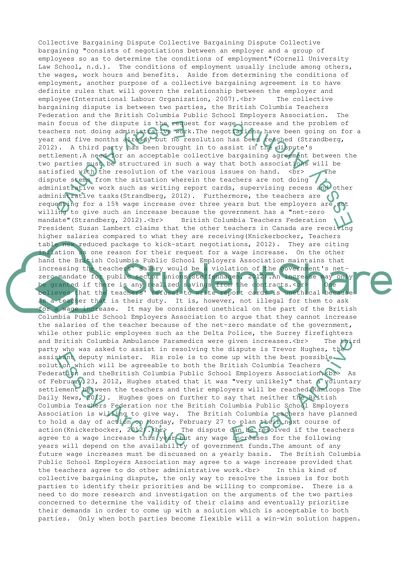 Collective Bargaining Dispute Collective Bargaining Dispute Collective bargaining “consists of negotiations between an employer and a group of employees so as to determine the conditions of employment”(Cornell University Law School, n.d.). The conditions of employment usually include among others, the wages, work hours and benefits. Aside from determining the conditions of employment, another purpose of a collective bargaining agreement is to have definite rules that will govern the relationship between the employer and employee(International Labour Organization, 2007).
The collective bargaining dispute is between two parties, the British Columbia Teachers Federation and the British Columbia Public School Employers Association. The main focus of the dispute is the request for wage increase and the problem of teachers not doing administrative work.The negotiations have been going on for a year and five months already but no resolution has been reached (Strandberg, 2012). A third party has been brought in to assist in the dispute’s settlement.A need for an acceptable collective bargaining agreement between the two parties must be structured in such a way that both associations will be satisfied with the resolution of the various issues on hand.
The dispute stems from the situation wherein the teachers are not doing administrative work such as writing report cards, supervising recess and other administrative tasks(Strandberg, 2012). Furthermore, the teachers are requesting for a 15% wage increase over three years but the employers are not willing to give such an increase because the government has a “net-zero mandate”(Strandberg, 2012).
British Columbia Teachers Federation President Susan Lambert claims that the other teachers in Canada are receiving higher salaries compared to what they are receiving(Knickerbocker, Teachers table new reduced package to kick-start negotiations, 2012). They are citing inflation as one reason for their request for a wage increase. On the other hand the British Columbia Public School Employers Association maintains that increasing the teachers’ salary would be a violation of the government’s net-zero mandate for public sector unions(Steffenhagen, 2012).An increase may only be granted if there is any realized savings from the contracts.
One believes that the teachers’ refusal to write report cards is unethical because as a teacher that is their duty. It is, however, not illegal for them to ask for a wage increase. It may be considered unethical on the part of the British Columbia Public School Employers Association to argue that they cannot increase the salaries of the teacher because of the net-zero mandate of the government, while other public employees such as the Delta Police, the Surrey firefighters and British Columbia Ambulance Paramedics were given increases.
The third party who was asked to assist in resolving the dispute is Trevor Hughes, the assistant deputy minister. His role is to come up with the best possible solution which will be agreeable to both the British Columbia Teachers Federation and theBritish Columbia Public School Employers Association.
As of February 23, 2012, Hughes stated that it was “very unlikely” that a voluntary settlement between the teachers and their employers will be reached(Kamloops The Daily News, 2012). Hughes goes on further to say that neither the British Columbia Teachers Federation nor the British Columbia Public School Employers Association is willing to give way. The British Columbia teachers have planned to hold a day of action on Monday, February 27 to plan their next course of action(Knickerbocker, 2012).
The dispute can be resolved if the teachers agree to a wage increase this year but any wage increases for the following years will depend on the availability of government funds.The amount of any future wage increases must be discussed on a yearly basis. The British Columbia Public School Employers Association may agree to a wage increase provided that the teachers agree to do other administrative work.
In this kind of collective bargaining dispute, the only way to resolve the issues is for both parties to identify their priorities and be willing to compromise. There is a need to do more research and investigation on the arguments of the two parties concerned to determine the validity of their claims and eventually prioritize their demands in order to come up with a solution which is acceptable to both parties. Only when both parties become flexible will a win-win solution happen.
References
Cornell University Law School. (n.d.). Collective bargaining. Retrieved February 26, 2012, from law.cornell.edu Web site: http://www.law.cornell.edu/wex/Collective_bargaining
International Labour Organization. (2007, February). Collective bargaining. Retrieved February 26, 2012, from ilo.org Web site: http://www.ilo.org/public/english/dialogue/themes/cb.htm
Kamloops The Daily News. (2012, February 23). Fact finders conclusion on teachers dispute not a surprise. Retrieved February 25, 2012, from kamloopsnews.ca: http://www.kamloopsnews.ca/article/20120223/KAMLOOPS0101/120229884/-1/kamloops01/fact-finders-conclusion-on-teachers-dispute-not-a-surprise
Knickerbocker, N. (2012, February 24). Teachers are determined to resolve labour dispute at the table. Retrieved February 26, 2012, from BC Teachers Federation Web site: http://bctf.ca/NewsReleases.aspx
Knickerbocker, N. (2012, January 17). Teachers table new reduced package to kick-start negotiations. Retrieved February 22, 2012, from BC Teachers Foundation: http://www.bctf.ca/NewsReleases.aspx?id=24886
Steffenhagen, J. (2012, January 17). B.C. teachers seeking 15 per cent pay hike over three years. The Vancouver Sun .
Strandberg, D. (2012, February 13). SD43 board of education reaffirms support for collective bargaining. The Tri-City News . Read More
Share:
Tags
Cite this document
(“Collective Bargaining Dispute Research Paper Example | Topics and Well Written Essays - 500 words”, n.d.)
Collective Bargaining Dispute Research Paper Example | Topics and Well Written Essays - 500 words. Retrieved from https://studentshare.org/management/1589701-collective-bargaining-dispute

...? Collective Bargaining MG420 DL Labor Relations Research Assignment 09/26 Collective Bargaining and American Law Introduction Collective bargaining is defined as a right of employees to join their forces, in order to raise voice for their legal and ethical rights. The main purpose of this privilege is to involve the workers in the decision making process of an organization, for which they are working; right to collectively bargain, changed lives of an ordinary worker, who was not even considered human during the ancient times. However, in the modern era of 21st century, he is well informed about his rights. Some researchers are of the view that, the legislation of collective bargaining has adversely affected the efficiency... of the...
12 Pages(3000 words)Term Paper

.... Trade disputes are therefore inevitable where unions are strong. Collective bargaining determines the relationship between employee and employer through an agreed employment contract (Torrington et al. 2011). This may limit workplace flexibility which is much needed in today’s economic conditions. Despite these shortcomings, strong role of unions is essential in helping the organization to implement new work practices. The unions are vital in ensuring that the management gets support from the members and also explains to workers on new working practices such as technical compensation procedures (Arvinen-Muondo & Perkins, 2010). Unions also negotiate productivity deals with employers so...
6 Pages(1500 words)Essay

...COLLECTIVE BARGAINING: The now popular term 'collective bargaining' was used for the first time by Sidney and Beatrice Webb in their works. It is a product of modern industrial society, and has no place in traditional agricultural society and it mirrors the economic change in the society. "The organization of wage earners into labor unions and the growth of management organization - in a word, the emergence of collective bargaining - is basically a facet of these structural changes in the economy over the past century," says Dunlop and Healy(1953, p. 8). It is a method employed by Unions, mainly while dealing with the management, to...
18 Pages(4500 words)Essay

...COLLECTIVE BARGAINING COLLECTIVE BARGAINING The term collective bargaining refers to a good-faith business mechanism people use to reach an agreement. Through basic negotiation and other techniques, the people involved find solutions to work-related issues such as vacation time, pay, work hazards, training and work hours that ultimately benefit everyone. People call these processes “collective” because the opinion and well-being of the whole group, or collective, is involved. The Universal Declaration of Human Rights formally recognizes the ability of people to use this strategy. (what is collective bargaining, 2013). Collective bargaining is the bargaining or negotiation taking place between an employer and a group of workers so... as to...
4 Pages(1000 words)Essay

...﻿Case Analysis with Reference to Collective Bargaining Introduction Collective bargaining is a right which employees of the company can use in order to form unions. The right is more ethical in nature than it is legal. However, legal systems of the world do not prevent workers from forming unions and they do not encourage them to do so either. At the end of the day, each organization has some kind of unions working in order to solve and resolve problems and disagreements with the management respectively. The lack of formal legislation in the field of unionization, the concept developed in the light of a few decisions which are taken by supreme courts of the countries....
8 Pages(2000 words)Essay

...Collective Bargaining Agreement al Affiliation September 26, In the signing of contracts it is important for the management to have a deeper knowledge of the workers civil rights which will help in establishing a healthy relationship as they work in the company. Collective Bargaining Agreements (CBA) is referred to as a commercial agreement that is signed between the management through a representative and the workers (National Education Association) Employees Civil rights According to Charles (1991), knowing the employees civil rights is critical in the collective bargaining agreement. The constitution safe guards the rights of the...
1 Pages(250 words)Coursework

...different (Colosie et al., 2006). This is to imply that, at times the issue at hand can be resolved between the two parties or if negotiations fail a third part is going to be considered. According to Hayter (2011) it is necessary to note that the employers are not at liberty to refuse or dispute the chance of getting into a collective agreement under the base that they are at a higher position. This is to say that employers and employees must in good faith still bargain. The main reason as to why such a bargain would occur is once one party feels uncomfortable. For example employees can feel that the company is experiencing a rapid increase in profits because of...
4 Pages(1000 words)Assignment
sponsored ads
Save Your Time for More Important Things
Let us write or edit the research paper on your topic "Collective Bargaining Dispute" with a personal 20% discount.
GRAB THE BEST PAPER

Let us find you another Research Paper on topic Collective Bargaining Dispute for FREE!