Comments (0)
Add to wishlistDelete from wishlist
Cite this document
Summary
The paper "Executive Compensation and Company Performance" states that evidence that executive pay is tied to company performance does not, however, deny that greedy executives have abused governance gaps to exploit conflicts. These exceptions, that cry out for managerial and governance reforms…
Download full paperFile format: .doc, available for editing
HIDE THIS PAPERGRAB THE BEST PAPER94.1% of users find it useful 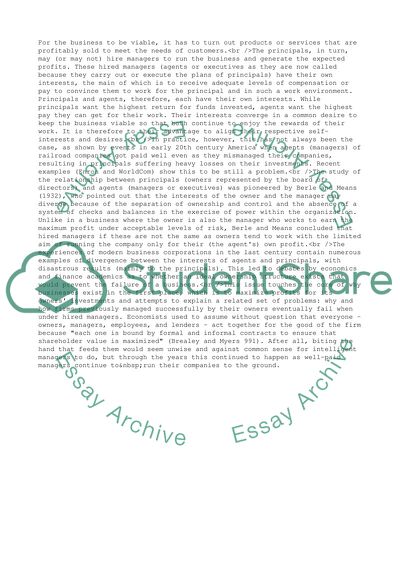 Download file to see previous pages For the business to be viable, it has to turn out products or services that are profitably sold to meet the needs of customers.
The principals, in turn, may (or may not) hire managers to run the business and generate the expected profits. These hired managers (agents or executives as they are now called because they carry out or execute the plans of principals) have their own interests, the main of which is to receive adequate levels of compensation or pay to convince them to work for the principal and in such a work environment. Principals and agents, therefore, each have their own interests. While principals want the highest return for funds invested, agents want the highest pay they can get for their work. Their interests converge in a common desire to keep the business viable so that both continue to enjoy the rewards of their work. It is therefore to their advantage to align their respective self-interests and desires.
In practice, however, this has not always been the case, as shown by events in early 20th century America when agents (managers) of railroad companies got paid well even as they mismanaged their companies, resulting in principals suffering heavy losses on their investments. Recent examples (Enron and WorldCom) show this to be still a problem.
The study of the relationship between principals (owners represented by the board of directors) and agents (managers or executives) was pioneered by Berle and Means (1932), who pointed out that the interests of the owner and the manager may diverge because of the separation of ownership and control and the absence of a system of checks and balances in the exercise of power within the organization. Unlike in a business where the owner is also the manager who works to earn the maximum profit under acceptable levels of risk, Berle and Means concluded that hired managers if these are not the same as owners tend to work with the limited aim of running the company only for their (the agent's) own profit.
The experiences of modern business corporations in the last century contain numerous examples of divergence between the interests of agents and principals, with disastrous results (mainly to the principals). This led to debates by economics and finance academics as to whether an ideal ownership structure exists that would prevent the failure of a business.
This issue touches the core of why businesses exist in the first place, which is to maximize profits for its owners' investments and attempts to explain a related set of problems: why and how firms previously managed successfully by their owners eventually fail when under hired managers. Economists used to assume without question that everyone - owners, managers, employees, and lenders - act together for the good of the firm because "each one is bound by formal and informal contracts to ensure that shareholder value is maximized" (Brealey and Myers 991). After all, biting the hand that feeds them would seem unwise and against common sense for intelligent managers to do, but through the years this continued to happen as well-paid managers continue to run their companies to the ground. ...Download file to see next pagesRead More
Share:
Tags
Cite this document
(Of all the lies out there, the one that corporate executives pay is Coursework, n.d.)
Of all the lies out there, the one that corporate executives pay is Coursework. https://studentshare.org/management/1503308-of-all-the-lies-out-there-the-one-that-corporate-executives-pay-is-linked-to-the-performance-of-their-companies-takes-the-prize-discuss-this-in-relation-to
(Of All the Lies Out There, the One That Corporate Executives Pay Is Coursework)
Of All the Lies Out There, the One That Corporate Executives Pay Is Coursework. https://studentshare.org/management/1503308-of-all-the-lies-out-there-the-one-that-corporate-executives-pay-is-linked-to-the-performance-of-their-companies-takes-the-prize-discuss-this-in-relation-to.
“Of All the Lies Out There, the One That Corporate Executives Pay Is Coursework”. https://studentshare.org/management/1503308-of-all-the-lies-out-there-the-one-that-corporate-executives-pay-is-linked-to-the-performance-of-their-companies-takes-the-prize-discuss-this-in-relation-to.
Comments (0)
Click to create a comment or rate a document

CHECK THESE SAMPLES OF Executive Compensation and Company Performance

It Takes All Kinds

6 Pages(1500 words)Essay
sponsored ads
Save Your Time for More Important Things
Let us write or edit the coursework on your topic "Executive Compensation and Company Performance" with a personal 20% discount.
GRAB THE BEST PAPER

Let us find you another Coursework on topic Executive Compensation and Company Performance for FREE!