Benefits of Going Green. Improving the Environmental and Ethical Image of a Restaurant - Essay Example

Comments (1)
Add to wishlistDelete from wishlist
Cite this document
Summary
In businesses however, adoption of green technologies had initially lagged with several big organizations having to be pressurized and petitioned to go green. Recent developments point to a scenario in which businesses have taken up the initiative of green strategies and technologies and are in fact leading the way on the issue. …
Download full paperFile format: .doc, available for editing
HIDE THIS PAPERGRAB THE BEST PAPER92.7% of users find it useful 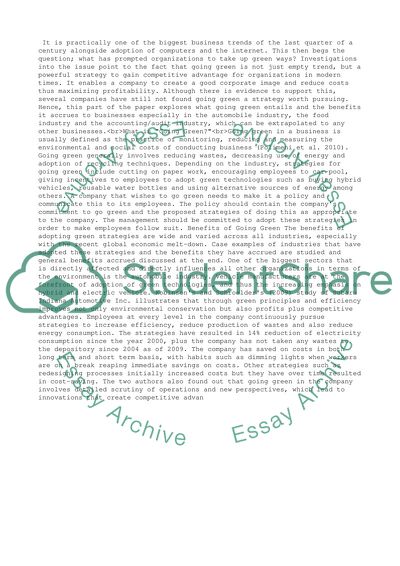 Extract of sample "Benefits of Going Green. Improving the Environmental and Ethical Image of a Restaurant"

Download file to see previous pages It is practically one of the biggest business trends of the last quarter of a century alongside adoption of computers and the internet. This then begs the question; what has prompted organizations to take up green ways? Investigations into the issue point to the fact that going green is not just empty trend, but a powerful strategy to gain competitive advantage for organizations in modern times. It enables a company to create a good corporate image and reduce costs thus maximizing profitability. Although there is evidence to support this, several companies have still not found going green a strategy worth pursuing. Hence, this part of the paper explores what going green entails and the benefits it accrues to businesses especially in the automobile industry, the food industry and the accounting/audit industry, which can be extrapolated to any other businesses.
What is “Going Green?”
Going green in a business is usually defined as the practice of monitoring, reducing and measuring the environmental and social costs of conducting business (Polimeni et al. 2010). Going green generally involves reducing wastes, decreasing use of energy and adoption of recycling techniques. Depending on the industry, strategies for going green include cutting on paper work, encouraging employees to car-pool, giving incentives to employees to adopt green technologies such as buying hybrid vehicles, reusable water bottles and using alternative sources of energy among others. A company that wishes to go green needs to make it a policy and communicate this to its employees. The policy should contain the company’s commitment to go green and the proposed strategies of doing this as appropriate to the company. The management should be committed to adopt these strategies in order to make employees follow suit. Benefits of Going Green The benefits of adopting green strategies are wide and varied across all industries, especially with the recent global economic melt-down. Case examples of industries that have adopted these strategies and the benefits they have accrued are studied and general benefits accrued discussed at the end. One of the biggest sectors that is directly affected and directly influences all other organizations in terms of the environment is the automobile industry. Vehicle manufacturers are at the forefront of adoption of green technologies, and thus the increasing emphasis on hybrid and electric vehicle. Robinson’s and Schroelder’s (2009) study of Subaru Indiana Automotive Inc. illustrates that through green principles and efficiency improves not only environmental conservation but also profits plus competitive advantages. Employees at every level in the company continuously pursue strategies to increase efficiency, reduce production of wastes and also reduce energy consumption. The strategies have resulted in 14% reduction of electricity consumption since the year 2000, plus the company has not taken any wastes to the depository since 2004 as of 2009. The company has saved on costs in both long term and short term basis, with habits such as dimming lights when workers are on a break reaping immediate savings on costs. Other strategies such as redesigning processes initially increased costs but they have over time resulted in cost-saving. The two authors also found out that going green in the company involves detailed scrutiny of operations and new perspectives, which lead to innovations that create competitive advan ...Download file to see next pagesRead More
Share:
Tags
Cite this document
(“Benefits of Going Green. Improving the Environmental and Ethical Image Essay”, n.d.)
Retrieved de https://studentshare.org/management/1390754-benefits-of-going-green-improving-the-environmental-and-ethical-image-of-a-restaurant

ma
madelynnthiel added comment 1 year ago
Student rated this paper as
This essay saved me today. I liked the content. It was very useful for my management course.

CHECK THESE SAMPLES OF Benefits of Going Green. Improving the Environmental and Ethical Image of a Restaurant

Emily's immediate supervisor deems her ‘over-enthusiasm’ as an impediment to her efficiency at work. Thus, she is recommended to lessen the time she spends for every patient.
Although she understands her supervisor’s recommendation from a business operation’s point-of-view, she is still adamant in her belief that gaining customer insights is crucial in aiding the pharmacy in better developing its line-up of medicinal offers. Carrying this burden, Emily consults her mentor in The Medical Nation, Dr Hussa Al Husine.
The mentoring session with Dr Husine happens twice a week for three weeks after Emily’s daily working period. Even without having a firm background in professional coaching, Emily thin...
10 Pages(2500 words)Coursework
sponsored ads
Save Your Time for More Important Things
Let us write or edit the essay on your topic "Benefits of Going Green. Improving the Environmental and Ethical Image of a Restaurant" with a personal 20% discount.
GRAB THE BEST PAPER

Let us find you another Essay on topic Benefits of Going Green. Improving the Environmental and Ethical Image of a Restaurant for FREE!