The U.S International Trade Statistics for Year 2014 and 2015 - Essay Example 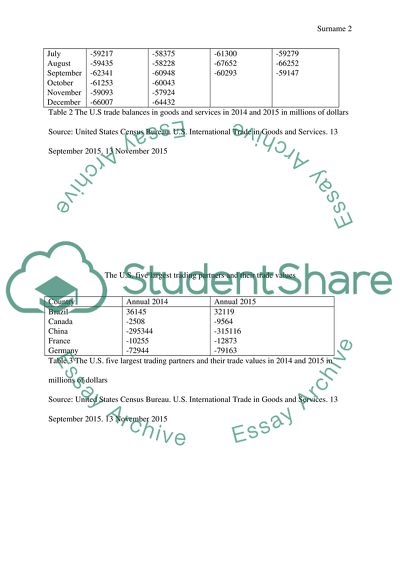 Extract of sample "The U.S International Trade Statistics for Year 2014 and 2015"

“The U.S International Trade Statistics for Year 2014 and 2015 Essay”, n.d. https://studentshare.org/macro-microeconomics/1701825-the-us-international-trade-statistics-for-year-2014-and-2015.
Comments (0)
Click to create a comment or rate a document

CHECK THESE SAMPLES OF The U.S International Trade Statistics for Year 2014 and 2015

...and they are part of GDP. Imports do not form a part of the GDP as they generate incomes abroad. For many years in US, imports exceed exports. That means domestic markets suffer in the goods that are imported. For example, steel import disrupts domestic steel industry resulting into a closure of many units and the loss of jobs. The government often imposes tariffs on certain products to make imports costlier safeguarding domestic industries. At times, the government resorts to quota system and restricts imports within predetermined quota for a given country. This is usually found in textiles and garments business where quotas are allotted to the countries beyond, which they cannot send material into US. Tariffs restrict...
3 Pages(750 words)Essay

The growth of the U. S. Military

...? The Growth of the U.S Military The Growth of the U.S Military The United s military has existed since 1775. During thefight for independence, the United States incepted the continental military in order to take responsibility of the revolutionary war of the time. In 1784, an official army came in to place to replace the continental army shortly after its disbandment. This gives the American army the longest existence in history. The first army won the war to independence although there was little professionalism. The American military has progressed from the unprofessional beginning to what it is today. In the 21st century, the American army has the largest defense budget in the world. The military makes use of advanced...
6 Pages(1500 words)Research Paper

...International Trade As reported by the World Trade Organisation in 2005, world trade in merchandise grew at an average of 7 percent per year between 1955 and 2004. Identify and critically discuss four factors that may have contributed to this over this period. 30% (600 WORDS) Much have been written about the factors contributing to the marked growth of trade between the years 1955 and 2004. Several factors have been mentioned and speculated to have contributed to such growth. However, I personally believe that the four factors that may have contributed to the growth in merchandise in world trade...
8 Pages(2000 words)Essay

...Disarmament Disarmament is the process of laying down arms, specifically the reduction or abolition of a nation’s military forces or armaments. In his inaugural address, John F. Kennedy exhorted the adversary nations of America to turn to the ways of peace by focusing on disarmament. The president requests the adversaries “...that both sides begin anew the quest for peace, before the dark powers of destruction unleashed by science engulf all humanity in planned of self-destruction” (Kennedy, 1961). This is a motivational speech in which Kennedy reminds other nations the futility of hoarding modern destructive weapons. Kennedy was worried over the present status of affairs where nations are overburdened by the cost of modern... Disarmament is...
2 Pages(500 words)Essay

Compare between Russia and America in Economic

Let us find you another Essay on topic The U.S International Trade Statistics for Year 2014 and 2015 for FREE!