Comments (0)
Add to wishlist Delete from wishlist
Cite this document
Summary
The whole year 2011 remained slow for growth and the last quarter rapid growth was mainly due to temporary factors (Perlo, 2012). All of this points to only one thing, the…
Download full paper File format: .doc, available for editing
HIDE THIS PAPERGRAB THE BEST PAPER92.5% of users find it useful 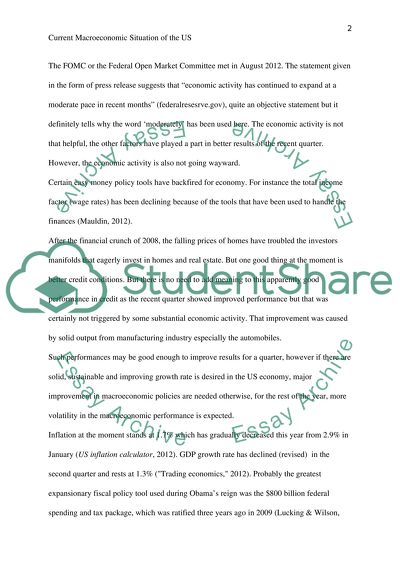 Extract of sample "Current macroeconomic situation in the U.S"

Current Macroeconomic Situation of the US At present, high unemployment and slow economic growth are the predominant features of the US economy. The whole year 2011 remained slow for growth and the last quarter rapid growth was mainly due to temporary factors (Perlo, 2012). All of this points to only one thing, the combined problem of high unemployment and slowing growth rate. The unemployment aspect of the US economy is actually a little dire.
The unemployed population is quitting the hunt for jobs. Moreover there is a widespread agreement on the notion that, even if the economy gets on a steady track, it won’t be until a couple of years later that the economy will be moving towards growth such that it would create jobs and resolve the ever increasing unemployment (Perlo, 2012).
The recovery is expected but after two years, and this recovery will continue for a long period of time and even reinforce it eventually (Perlo, 2012). A critical view point to this whole situation is that the profits have been restored at the expense of social benefits and salaries, but it will eventually have an impact on investments resulting in an increase. When looking at the real estate, there has been no new housing construction. But when the up surging demand from family household is considered there is a good chance that there will be a boom in the real estate market in the near future.
One should always be kept in mind when analyzing the current situation of the US that this is the recovery session after the financial crisis, so circumstances are definitely abnormal. As mentioned earlier, job creation is of paramount importance. According to an estimate, over 300,000 new jobs need to be created every month if a significant change is to be observed in the near future.
The FOMC or the Federal Open Market Committee met in August 2012. The statement given in the form of press release suggests that “economic activity has continued to expand at a moderate pace in recent months” (federalresesrve.gov), quite an objective statement but it definitely tells why the word ‘moderately’ has been used here. The economic activity is not that helpful, the other factors have played a part in better results of the recent quarter. However, the economic activity is also not going wayward.
Certain easy money policy tools have backfired for economy. For instance the total income factor (wage rates) has been declining because of the tools that have been used to handle the finances (Mauldin, 2012).
After the financial crunch of 2008, the falling prices of homes have troubled the investors manifolds that eagerly invest in homes and real estate. But one good thing at the moment is better credit conditions. But there is no need to add meaning to this apparently good performance in credit as the recent quarter showed improved performance but that was certainly not triggered by some substantial economic activity. That improvement was caused by solid output from manufacturing industry especially the automobiles.
Such performances may be good enough to improve results for a quarter, however if there are solid, sustainable and improving growth rate is desired in the US economy, major improvement in macroeconomic policies are needed otherwise, for the rest of the year, more volatility in the macroeconomic performance is expected.
Inflation at the moment stands at 1.7% which has gradually decreased this year from 2.9% in January (US inflation calculator, 2012). GDP growth rate has declined (revised) in the second quarter and rests at 1.3% ("Trading economics," 2012). Probably the greatest expansionary fiscal policy tool used during Obama’s reign was the $800 billion federal spending and tax package, which was ratified three years ago in 2009 (Lucking & Wilson, 2012). This expansionary policy had a huge impact on the current situation on the US economy.

“Current Macroeconomic Situation in the U.S Essay - 1”, n.d. https://studentshare.org/macro-microeconomics/1605068-current-macroeconomic-situation-in-the-us.
Comments (0)
Click to create a comment or rate a document

CHECK THESE SAMPLES OF Current macroeconomic situation in the U.S

...?The United s Current Macroeconomic Situation Andrew Tilton , the Senior US and Canada Economist believes that America’s economy is getting stronger after the global financial crisis. He contends that core inflation would continue to be low for the following months and that increased interest rates will not hinder the full recovery. Stated otherwise, at this moment, US economy as a whole is strong. Tilton (2011) cited two main factors as the basis of this prediction. The first reason is the stronger private sector balance sheets in America. To note, before the financial crisis, America’s private sector was spending beyond what it can only spend (Tilton, 2011). This means that the people in America were borrowing in order to fund spending...
2 Pages (500 words) Essay

...?Macroeconomic Situation Current Macro Economic Situation of the US It would not be wrong to suggest that though the global economy is in the recovery phase; the progress has become even more uncertain. In terms of this study the present macroeconomic scenario of the United States has been taken into consideration. It has been found that the economy of the United States has rescued itself from the recession and has begun to rise since the second half of the year 2009. It was expected that the economy of the United States in the year 2010 would grow by 2.9 percent and in the year 2011 it would decline to 2.5 percent. Further, it was expected that the private consumption for the year 2010 and the year 2011 would be restrained at 2.5 percent...
2 Pages (500 words) Essay

Current Macroeconomic Situation in the U.S

...? U.S. - CURRENT MACROECONOMIC SITUATION ID Number: E-mail address: of of University Word Count: 974 Date of Submission: October 05, 2011 Introduction This paper gives a brief but concise snapshot of the United States economy at this point in time by looking at some key indicators such as unemployment, inflation and recession threats. The state of the domestic economy has always been topmost in the minds of American citizens. It will perhaps be one of the most defining issues that will determine the winner of next year's presidential elections as well. People are understandably worried about the economy as it impact on them directly, perhaps more significantly than other concerns such as a global anti-terror war. The health of the U.S...
3 Pages (750 words) Essay

...? Current Macroeconomic Situation Part 3, Omnivore’s Dilemma While the is much interested in mentioningthe read, his argument does not seem to augur well with what he preaches. Most of his writings were pointing away from the bread. However, he tends to preach more about the meat and actually goes to actualize the meat diet just as Atkins diet recommends Westman, C et al. (2010). I support the Atkins meat diet I must admit that I do not know how it works. For example, I fear that the Atkins diet only recommends taking meat but does not convince one on the reasons for the preference. The argument that one takes only meat and no pasta or read is for one to be likely to lose weight (Pollan, 2007). I think the argument is that the pasta...
3 Pages (750 words) Essay

...Macroeconomic Situation According to the Federal Open Market Committee the economic activity in the United s is increasing slowly and gradually since January 2010. (FRB, 2010) The investment in the business activities has been observed to be growing consistently. Also since the demand for the manufactured products have increased over time, the output of the manufacturing sector has improved. Furthermore, despite the fact that the unemployment rate has remained at 9.7%, the labor market is getting a little stable now. (FRB, 2010) Although the manufacturing production increase in January was more than expected, the output is still quite below the long run average level of production. As a result there are lesser incentives...
2 Pages (500 words) Essay

...Current Macroeconomic Situation Task Introduction Over the few years, the macroeconomic situation has not been at its best owing to the recession that hit the US. Although, the situation has commenced a recovery from the most disastrous period in the financial system of the US not much improvement has been evident. The prevailing microeconomic situation has become evident in most indicators of the economy bringing shocking news to the economists and the public in general. The unemployment has disastrously plummeted from the initial levels in a rate that most people never expected. Despite the augmenting economic productivity in the US depicted in the numerous productions and purchases in terms of goods and services, the rates of national...
2 Pages (500 words) Essay

Current Macroeconomic Situation in the U.S

...Current Macroeconomic Situation Current Macroeconomic Situation United s of America’s macroeconomic situation is a debatable subject worldwide. The economy in question has been on recession for the past few years and we can say it is on the recovery path. Despite this (recession) the US economy remains on top of the list in the leading economies of the world. The USA government’s intervention saved the situation that could have otherwise worsened. Unemployment rate is at its topmost. Insufficient or lack of jobs implies that the consumer confidence alongside the sentiment of businesses is at risk. This is a menace to an economy. As much as the United States government is striving hard to curb recession, it is also trying to solve...
2 Pages (500 words) Assignment

Current Macroeconomic Situation in the US

...Current Macroeconomic Situation in the US Affiliation Current Macroeconomic Situation in the US U.S is the heading economy of the globe but has had a recession since the 2008 financial crisis. Five years after this crisis, 63 percent of Americans feel that the economic system is no more secure than it was before the 2008 crash (OECD, 2013). Large percentage is of opinion that jobs and household incomes are yet to recover from the recession. And when asked about the effect of government efforts to handle the situation, majority believe the economic policies have just benefited corporations, the rich, and large banks than small businesses, the poor or middle-class (OECD,2013). The government has pumped money into the economy to boost...
2 Pages (500 words) Essay
sponsored ads
Save Your Time for More Important Things
Let us write or edit the essay on your topic "Current macroeconomic situation in the U.S" with a personal 20% discount.
GRAB THE BEST PAPER

Let us find you another Essay on topic Current macroeconomic situation in the U.S for FREE!