Comments (0)
Add to wishlistDelete from wishlist
Cite this document
Summary
This essay describes the major economic problem facing economists is the allocation of the scarce resources in the most efficient manner. Scarce resources are those that are inadequate to meet all the needs of the society and should, therefore, be allocated in the most efficient ways…
Download full paperFile format: .doc, available for editing
HIDE THIS PAPERGRAB THE BEST PAPER94.5% of users find it useful 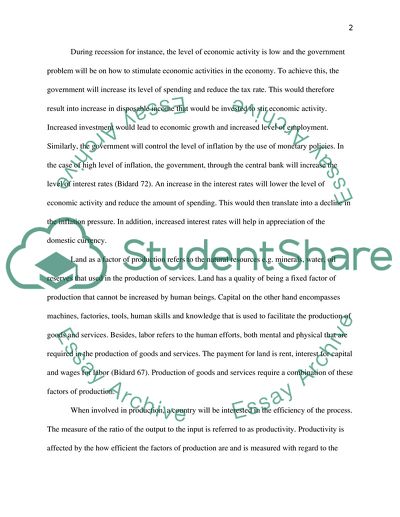 Extract of sample "How to Encourage Economic Stability"

Micro and Macro Economics The major economic problem facing economists is the allocation of the scarce resources in the most efficient manner. Scarce resources are those that are inadequate to meet all the needs of the society and should therefore be allocated in the most efficient ways (Bidard 63). Land, labor and capital constitutes the factors of production that are scarce and that should be allocated to stir economic growth and solve the fundamental economic problems. Before allocating the scarce resources, the economist must ask the following five questions are what to produce? How to produce? How to promote economic stability? How to encourage economic stability? Whom to distribute to?
In answering the questions above, the economy will determine what is necessary to produce in order to achieve the desired economic goals and the manner of production i.e. whether to use labor intensive or capital-intensive technique. After production, the goods and services must be distributed to the target group or sector of the economy. In doing this, the economist must further ensure that it promotes economic stability i.e. a situation in which the inflation rates, interest rates, unemployment rate, foreign exchange rate are all put under control. Moreover, resource allocation must promote economic growth.
The government in solving the economic problems and achieving economic stability uses both fiscal and monetary policies. Fiscal policy is the use of taxation and government spending to influence economic performance whereas monetary policy entails the control of interest rates and spending to attain economic stabilization (Bidard 66). The government can use either fiscal policies or monetary policies or both in solving the economic problems.
During recession for instance, the level of economic activity is low and the government problem will be on how to stimulate economic activities in the economy. To achieve this, the government will increase its level of spending and reduce the tax rate. This would therefore result into increase in disposable income that would be invested to stir economic activity. Increased investment would lead to economic growth and increased level of employment. Similarly, the government will control the level of inflation by the use of monetary policies. In the case of high level of inflation, the government, through the central bank will increase the level of interest rates (Bidard 72). An increase in the interest rates will lower the level of economic activity and reduce the amount of spending. This would then translate into a decline in the inflation pressure. In addition, increased interest rates will help in appreciation of the domestic currency.
Land as a factor of production refers to the natural resources e.g. minerals, water, oil reserves that used in the production of services. Land has a quality of being a fixed factor of production that cannot be increased by human beings. Capital on the other hand encompasses machines, factories, tools, human skills and knowledge that is used to facilitate the production of goods and services. Besides, labor refers to the human efforts, both mental and physical that are required in the production of goods and services. The payment for land is rent, interest for capital and wages for labor (Bidard 67). Production of goods and services require a combination of these factors of production.
When involved in production, a country will be interested in the efficiency of the process. The measure of the ratio of the output to the input is referred to as productivity. Productivity is affected by the how efficient the factors of production are and is measured with regard to the GDP. The quality of labor and capital will influence the level of wealth creation. The amount of wealth created will also be dependent on the quantity of natural resources available for production. In summary, economists are interested with how the scarce resources are utilized to satisfy the unlimited wants of the society. The better the allocation the higher the productivity.
Work Cited
Bidard, Ch.. Prices, reproduction, scarcity. Cambridge, UK: Cambridge University Press, 2004. Print. Read More
Share:
Tags
Cite this document
(“How to Encourage Economic Stability Essay Example | Topics and Well Written Essays - 500 words”, n.d.)
How to Encourage Economic Stability Essay Example | Topics and Well Written Essays - 500 words. Retrieved from https://studentshare.org/macro-microeconomics/1595156-please-read-order-instructions

CHECK THESE SAMPLES OF How to Encourage Economic Stability

One of the major policies undertaken by the British Government in the last two years was fiscal decentralization. The government has taken steps to ensure that improvement is made in the country’s...
7 Pages(1750 words)Coursework
sponsored ads
Save Your Time for More Important Things
Let us write or edit the essay on your topic "How to Encourage Economic Stability" with a personal 20% discount.
GRAB THE BEST PAPER

Let us find you another Essay on topic How to Encourage Economic Stability for FREE!